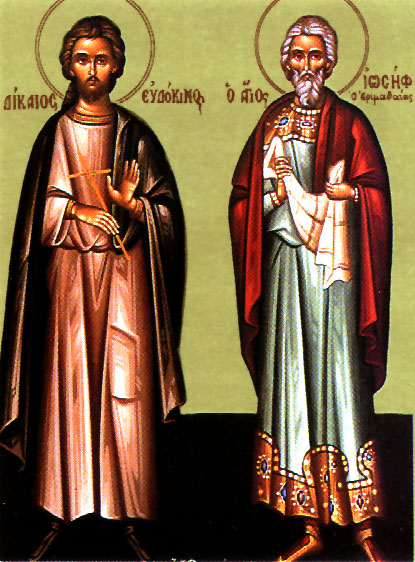 Forefeast of the Procession of the Honorable and Lifegiving Cross of the Lord. Righteous Eudocimus of Cappadocia (9th c.). Martyr Julitta at Cæsarea (304-305). St. Germanus, Bishop of Auxerre (448). Hieromartyr Benjamin, Metropolitan of Petrograd and Gdovsk (1922), and those with him: Archimandrite Sergius and the Laymen, Yuri and John. Saint Eudocimus, a native of Cappadocia (Asia Minor), lived during the ninth century during the reign of Emperor Theophilus (829-842). He was the son of the pious Christians Basil and Eudokia, an illustrious family known to the emperor. They raised their son “in discipline and admonition of the Lord” (Eph. 6: 4), planting in his soul a sincere faith and holy virtues.

The righteous life of Saint Eudocimus was devoted to pleasing God and serving his neighbor. Having given a vow to remain unmarried and chaste, he avoided conversation with women and did not look at them. He would speak only with his own mother, whom he greatly respected. The emperor valued his virtue and talents, so he appointed Saint Eudocimus as governor of Chorziane, Armenia. Fulfilling his duty as a servant of God, Saint Eudocimus governed the people justly and with kindness. He concerned himself with the unfortunate, and with orphans and widows, and he was a defender of the common people. His personal Christian exploits which he did in secret, were known only to God.

Eudocimus pleased God by his blameless life, and the Lord called him at age 33. Lying on his deathbed, Saint Eudocimus gave final instructions to place him in the grave in those clothes in which he would meet death. Then he sent everyone out of the room and entreated the Lord that no one would see his end, just as no one saw his secret efforts during life. His attendants buried him as he had instructed them. Right after the death of Saint Eudocimus miracles took place at his grave. Many sick people were healed, and the news of the miraculous healings spread.

After 18 months, the mother of Saint Eudocimus came from Constantinople to venerate his relics. She gave orders to remove the stone, dig up the ground, and open the grave. Everyone beheld the face of the saint, bright as if alive, altogether untouched by decay. A great fragrance came from him. They took up the coffin with the relics from the earth, and they dressed the saint in new clothes. His mother wanted to take the relics of her son to Constantinople, but the Kharsian people would not clear a path for their holy one. After a certain time the hieromonk Joseph, having lived and served at the grave of the saint, transported the relics of Saint Eudocimus to Constantinople. There they were placed in a silver reliquary in the church of the Most Holy Theotokos, built by the parents of the saint.

Saint Eudocimus is considered by the Russian Church to be one of the special protectors and intercessors before God of the family hearth. He was, as his name implies, truly successful in every virtue.

He who called you from earth to heaven, keeps your body unharmed after death, holy Eudocimus; for you lived a sober and holy life and did not defile your flesh; so with boldness intercede with Christ that we may be saved.

Today your honored memory has assembled us at the holy shrine of your sacred relics; all then who approach and venerate them are rescued from the evil malice of demons and are swiftly delivered from various diseases, blessed Eudocimus.

10
For we must all appear before the judgment seat of Christ, that each one may receive the things done in the body, according to what he has done, whether good or bad.
11
Knowing, therefore, the terror of the Lord, we persuade men; but we are well known to God, and I also trust are well known in your consciences.
12
For we do not commend ourselves again to you, but give you opportunity to boast on our behalf, that you may have an answer for those who boast in appearance and not in heart.
13
For if we are beside ourselves, it is for God; or if we are of sound mind, it is for you.
14
For the love of Christ compels us, because we judge thus: that if One died for all, then all died;
15
and He died for all, that those who live should live no longer for themselves, but for Him who died for them and rose again.

9
It came to pass in those days that Jesus came from Nazareth of Galilee, and was baptized by John in the Jordan.
10
And immediately, coming up from the water, He saw the heavens parting and the Spirit descending upon Him like a dove.
11
Then a voice came from heaven, “You are My beloved Son, in whom I am well pleased.”
12
Immediately the Spirit drove Him into the wilderness.
13
And He was there in the wilderness forty days, tempted by Satan, and was with the wild beasts; and the angels ministered to Him.
14
Now after John was put in prison, Jesus came to Galilee, preaching the gospel of the kingdom of God,
15
and saying, “The time is fulfilled, and the kingdom of God is at hand. Repent, and believe in the gospel.”