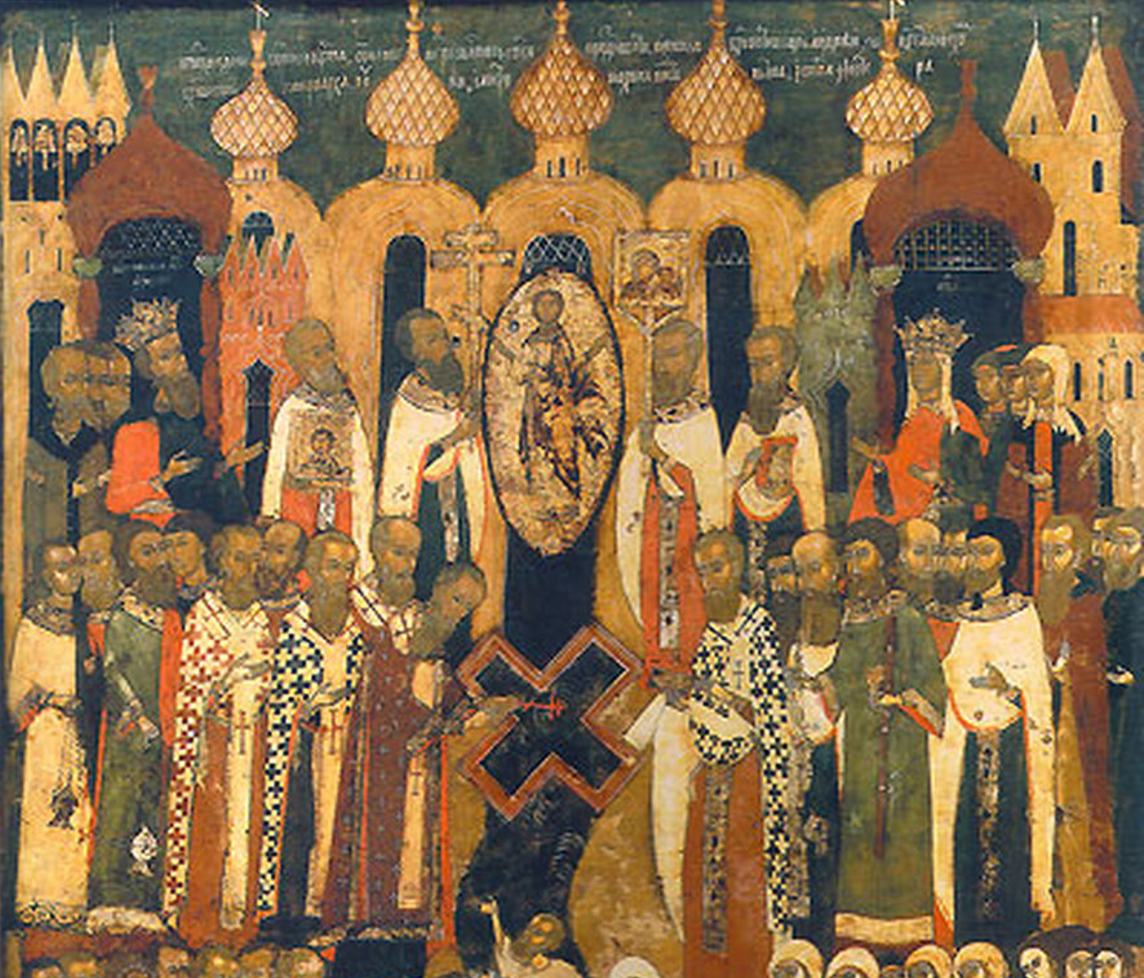 Beginning of the Dormition Fast

PROCESSION OF THE HOLY CROSS

The Procession of the Venerable Wood of the Life-Creating Cross of the Lord: In the Greek Horologion of 1897 the derivation of this Feast is explained: “Because of the illnesses that occur in August, it was customary, in former times, to carry the Venerable Wood of the Cross through the streets and squares of Constantinople for the sanctification of the city, and for relief from sickness. On the eve (July 31), it was taken out of the imperial treasury, and laid upon the altar of the Great Church of Hagia Sophia (the Wisdom of God). From this Feast until the Dormition of the Most Holy Theotokos, they carried the Cross throughout the city in procession, offering it to the people to venerate. This also is the Procession of the Venerable Cross.”

In the Russian Church this Feast is combined also with the remembrance of the Baptism of Rus, on August 1, 988. In the “Account of the Order of Services in the Holy, Catholic and Apostolic Great Church of the Dormition,” compiled in 1627 by order of Patriarch Philaret of Moscow and All Rus, there is the following explanation of the Feast: “On the day of the Procession of the Venerable Cross there is a church procession for the sanctification of water and for the enlightenment of the people, throughout all the towns and places.”

Knowledge of the day of the actual Baptism of Rus was preserved in the Chronicles of the sixteenth century: “The Baptism of the Great Prince Vladimir of Kiev and all Rus was on August 1.”

In the present practice of the Russian Church, the Lesser Sanctification of Water on August 1 is done either before or after Liturgy. Because of the Blessing of Water, this first Feast of the Savior in August is sometimes called ‘Savior of the Water.” There may also be a Blessing of New Honey today, which is why the Feast is also called “Savior of the Honey.” From this day the newly gathered honey is blessed and tasted.

Troparion of the Cross, tone 1

O Lord, save Your people, And bless Your inheritance! Grant victories to the Orthodox Christians Over their adversaries. And by virtue of the Cross, Preserve Your habitation!

Kontakion of the Cross, tone 4

As You were voluntarily crucified for our sake, Grant mercy to those who are called by Your name; Make all Orthodox Christians glad by Your power, Granting them victories over their adversaries, By bestowing on them the invincible trophy, Your weapon of peace!

18
For the message of the cross is foolishness to those who are perishing, but to us who are being saved it is the power of God.
19
For it is written:
20
Where is the wise? Where is the scribe? Where is the disputer of this age? Has not God made foolish the wisdom of this world?
21
For since, in the wisdom of God, the world through wisdom did not know God, it pleased God through the foolishness of the message preached to save those who believe.
22
For Jews request a sign, and Greeks seek after wisdom;
23
but we preach Christ crucified, to the Jews a stumbling block and to the Greeks foolishness,
24
but to those who are called, both Jews and Greeks, Christ the power of God and the wisdom of God.

6
Therefore, when the chief priests and officers saw Him, they cried out, saying, “Crucify Him, crucify Him!” Pilate said to them, “You take Him and crucify Him, for I find no fault in Him.”
7
The Jews answered him, “We have a law, and according to our law He ought to die, because He made Himself the Son of God.”
8
Therefore, when Pilate heard that saying, he was the more afraid,
9
and went again into the Praetorium, and said to Jesus, “Where are You from?” But Jesus gave him no answer.
10
Then Pilate said to Him, “Are You not speaking to me? Do You not know that I have power to crucify You, and power to release You?”
11
Jesus answered, “You could have no power at all against Me unless it had been given you from above. Therefore the one who delivered Me to you has the greater sin.”
13
When Pilate therefore heard that saying, he brought Jesus out and sat down in the judgment seat in a place that is called The Pavement, but in Hebrew, Gabbatha.
14
Now it was the Preparation Day of the Passover, and about the sixth hour. And he said to the Jews, “Behold your King!”
15
But they cried out, “Away with Him, away with Him! Crucify Him!” Pilate said to them, “Shall I crucify your King?” The chief priests answered, “We have no king but Caesar!”
16
Then he delivered Him to them to be crucified. So they took Jesus and led Him away.
17
And He, bearing His cross, went out to a place called the Place of a Skull, which is called in Hebrew, Golgotha,
18
where they crucified Him, and two others with Him, one on either side, and Jesus in the center.
19
Now Pilate wrote a title and put it on the cross. And the writing was: JESUS OF NAZARETH, THE KING OF THE JEWS.
20
Then many of the Jews read this title, for the place where Jesus was crucified was near the city; and it was written in Hebrew, Greek, and Latin.
25
Now there stood by the cross of Jesus His mother, and His mother’s sister, Mary the wife of Clopas, and Mary Magdalene.
26
When Jesus therefore saw His mother, and the disciple whom He loved standing by, He said to His mother, “Woman, behold your son!”
27
Then He said to the disciple, “Behold your mother!” And from that hour that disciple took her to his own home.
28
After this, Jesus, knowing that all things were now accomplished, that the Scripture might be fulfilled, said, “I thirst!”
30
So when Jesus had received the sour wine, He said, “It is finished!” And bowing His head, He gave up His spirit.
31
Therefore, because it was the Preparation Day, that the bodies should not remain on the cross on the Sabbath (for that Sabbath was a high day), the Jews asked Pilate that their legs might be broken, and that they might be taken away.
32
Then the soldiers came and broke the legs of the first and of the other who was crucified with Him.
33
But when they came to Jesus and saw that He was already dead, they did not break His legs.
34
But one of the soldiers pierced His side with a spear, and immediately blood and water came out.
35
And he who has seen has testified, and his testimony is true; and he knows that he is telling the truth, so that you may believe.