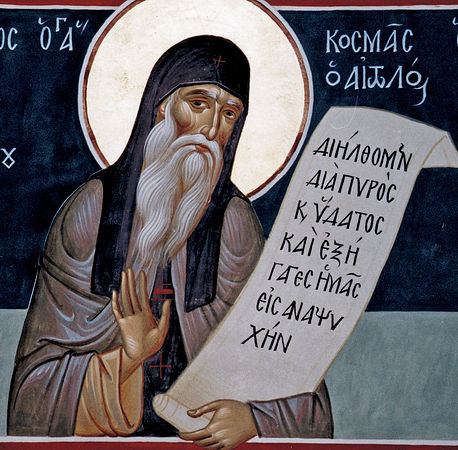 The New Hieromartyr Cosmas, Equal of the Apostles, in the world Constas, was a native of Aitolia. He studied at first under the guidance of the archdeacon Ananias Dervisanos, and afterwards continued his education on Mount Athos, at the Vatopedi school renowned for teachers such as Nicholas Tzartzoulios (from Metsovo) and Eugenius Voulgaris (afterwards in the years 1775-1779 the archbishop of Ekaterinoslav and the Chersonessus).

Remaining on Athos at the Philotheou monastery to devote himself to spiritual labors, he was tonsured a monk with the name Cosmas, and later was ordained hieromonk. The desire to benefit his fellow Christians, to guide them upon the way of salvation and strengthen their faith, impelled Saint Cosmas to seek the blessing of his spiritual fathers and go to Constantinople. There he mastered the art of rhetoric and, having received a written permit of Patriarch Seraphim II (and later from his successor Sophronius) to preach the Holy Gospel.

So the saint began to proclaim the Gospel at first in the churches of Constantinople and the surrounding villages, then in the Danube regions, in Thessalonica, in Verroia, in Macedonia, Chimaera, Akarnania, Aitolia, on the islands of Saint Maura, Kephalonia and other places.

His preaching, filled with the grace of the Holy Spirit, was simple, calm, and gentle. It brought Christians great spiritual benefit. The Lord Himself assisted him and confirmed his words with signs and miracles, just as He had confirmed the preaching of the Apostles.

Preaching in the remote areas of Albania, where Christian piety had almost disappeared among the rough and coarse people entrenched in sin, Saint Cosmas led them to sincere repentance and improvement with the Word of God.

Under his guidance, church schools were opened in the towns and villages. The rich offered their money for the betterment of the churches, for the purchase of Holy Books (which the saint distributed to the literate), veils (which he gave women, admonishing them to come to church with covered heads),for prayer ropes and crosses (which he distributed to the common folk), and for baptismal fonts so that children could be baptized in the proper manner.

Since the churches could not accommodate everyone wanting to hear the wise preacher, Saint Cosmas with forty or fifty priests served the Vigil in the fields, and in city squares, where thousands of people prayed for the living and for the dead, and were edified by his preaching. Everywhere that Saint Cosmas halted and preached, the grateful listeners set up a large wooden cross, which remained thereafter in memory of this.

The apostolic service of Saint Cosmas was brought to a close by his martyric death in the year 1779. At 65 years of age, he was seized by the Turks and strangled. His body was thrown into a river, and after three days, was found by the priest Mark and buried near the village of Kolikontasi at the monastery of the Entrance into the Temple of the Most Holy Theotokos. Afterwards, part of his relics were transferred to various places as a blessing.

He was glorified by the Ecumenical Patriarchate in 1961.

With odes let us acclaim the renowned Cosmas, who gloriously excelled among the choirs of the martyrs, priest, and ascetics, and let gather in praise of his memory; for he dispenseth healing to them that have recourse to him with faith, since, as an equal of the Apostles, he hath boldness before Christ.

Come from Aetolia, O God-bearing Father, thou didst become a righteous monk on Mount Athos; and as a true initiate of the glory of God, thou didst preach the word of truth to all men, O most blest one, and didst bring them all to Christ as a true emulator of the Apostles’ choir, and thou didst prove a hieromartyr in shedding thy sacred blood.

5
For I consider that I am not at all inferior to the most eminent apostles.
6
Even though I am untrained in speech, yet I am not in knowledge. But we have been thoroughly manifested among you in all things.
7
Did I commit sin in humbling myself that you might be exalted, because I preached the gospel of God to you free of charge?
8
I robbed other churches, taking wages from them to minister to you.
9
And when I was present with you, and in need, I was a burden to no one, for what I lacked the brethren who came from Macedonia supplied. And in everything I kept myself from being burdensome to you, and so I will keep myself.
10
As the truth of Christ is in me, no one shall stop me from this boasting in the regions of Achaia.
11
Why? Because I do not love you? God knows!
12
But what I do, I will also continue to do, that I may cut off the opportunity from those who desire an opportunity to be regarded just as we are in the things of which they boast.
13
For such are false apostles, deceitful workers, transforming themselves into apostles of Christ.
14
And no wonder! For Satan himself transforms himself into an angel of light.
15
Therefore it is no great thing if his ministers also transform themselves into ministers of righteousness, whose end will be according to their works.
16
I say again, let no one think me a fool. If otherwise, at least receive me as a fool, that I also may boast a little.
17
What I speak, I speak not according to the Lord, but as it were, foolishly, in this confidence of boasting.
18
Seeing that many boast according to the flesh, I also will boast.
19
For you put up with fools gladly, since you yourselves are wise!
20
For you put up with it if one brings you into bondage, if one devours you, if one takes from you, if one exalts himself, if one strikes you on the face.
21
To our shame I say that we were too weak for that! But in whatever anyone is bold – I speak foolishly – I am bold also.

1
And again He began to teach by the sea. And a great multitude was gathered to Him, so that He got into a boat and sat in it on the sea; and the whole multitude was on the land facing the sea.
2
Then He taught them many things by parables, and said to them in His teaching:
3
“Listen! Behold, a sower went out to sow.
4
And it happened, as he sowed, that some seed fell by the wayside; and the birds of the air came and devoured it.
5
Some fell on stony ground, where it did not have much earth; and immediately it sprang up because it had no depth of earth.
6
But when the sun was up it was scorched, and because it had no root it withered away.
7
And some seed fell among thorns; and the thorns grew up and choked it, and it yielded no crop.
8
But other seed fell on good ground and yielded a crop that sprang up, increased and produced: some thirtyfold, some sixty, and some a hundred.”
9
And He said to them, “He who has ears to hear, let him hear!”