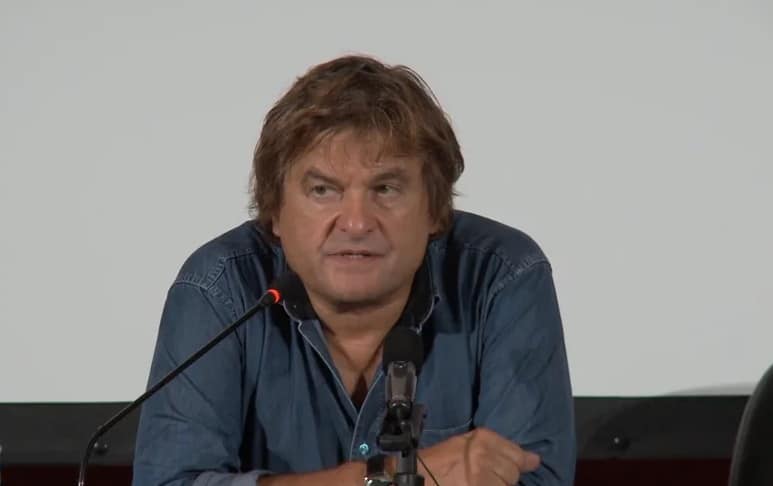 Here is the first lecture in the first series, entitled “What’s philosophy?”
It was given by Bertrand Vergely as part of the “Port-Royal Mondays” on September 29, 2014, and organized by Orthodoxie.com.

Greetings to all of you. I am very proud, very honored, and very happy to be here to launch this series of lectures on philosophy, on the relationship between philosophy and theology, and on what we can call, religion, a term which is often poorly defined.

So today, we are going to look at the question of philosophy. What is philosophy? To talk about philosophy, I’ll take a step back, and I’ll talk about an experience that I think is fundamental in philosophy, and that allows us to understand what thinking means.

Nietzsche repeatedly said that philosophy is a lifestyle. This lifestyle is life with thinking. But you will tell me, what is thinking? I believe that in order to understand thinking, it is necessary to start from Book 6 of Plato’s Republic, where he defines the four degrees of knowledge, four degrees to understand what thinking is.

The first degree of knowledge, Plato tells us, is in the realm of sensible impressions, of appearances. Said as is, that does not mean much, it’s a little abstract. But if we translate what Plato means, we realize that sensible impressions, or appearances, refer to thoughts, that is, to the images that arise from external stimuli which imprint themselves in us. We close our eyes, and we are full of thoughts. We are in a hubbub of thoughts. We are in a mental chaos, we are bombarded by impressions. And thinking means having images, and also to send impressions. Our first experience of thinking is impressionistic. Things make impressions on us, and we pass on theses impressions. When someone tells us, what do you think about this? we say, well, I like it, or I don’t like it, this is what I feel, and we pass on our impressions.

Of course, it is not grandiose, but it is the beginning of thinking. And all thoughts begin with impressions. In his Ethics, Spinoza calls that hearsay. I heard about it. I see, I hear about it. It’s pretty much what we see on television, what we listen to on the radio. We listen to the rumor of the world, which gives us a certain number of impressions.

The second stage of thinking is already much more elaborate, Plato calls it the stage of belief, pistis. What is a belief? I think that a belief is a representative mental system, an image we have of the world, an image based on our interests, our experiences, our imagination, our desires, and our imagination. Everyone has beliefs, everyone has developed a certain mental system. Societies have beliefs, representations, myths, images, which make it possible to structure their imagination. They believe in a certain number of images that they have developed about the world. This belief makes it possible to give coherence to existence, and allows human beings to function, as a human being is someone who needs to have an image of the world to be able to go through existence.

The third level of thinking is the rigorous image that one may have of the world, depending on sciences, especially on the scientific method. What does characterize science? What characterizes science is the method. It is the fact that when scientists think, they are not in the realm of beliefs, but in the method, that is to say, they put forward rigorous thoughts, because these thoughts either follow each other in a deductive process, or have been verified through an experimental protocol.

So, I will say what Plato says in his own language, and then I will translate into mine. For Plato, true knowledge does not consist in expressing, or in producing a rigorous discourse from what exists. True knowledge is what happens when one grasps “the thing itself”, as Husserl and phenomenology would say, that is to say, what really characterizes a thing. Here, we are in the realm essence, we are in essentiality. We say something through which what is, is what it is. Plato calls it identity. Identity refers to the specificity of a thing, to what makes it what it is and nothing else. It refers to its unique character. And we can say that when we refine and purify knowledge, starting from impressions, then beliefs, and then a methodical knowledge, at one point, by dint of hard work, we ultimately manage to grasp the essence of something.

The whole lecture is here in French.