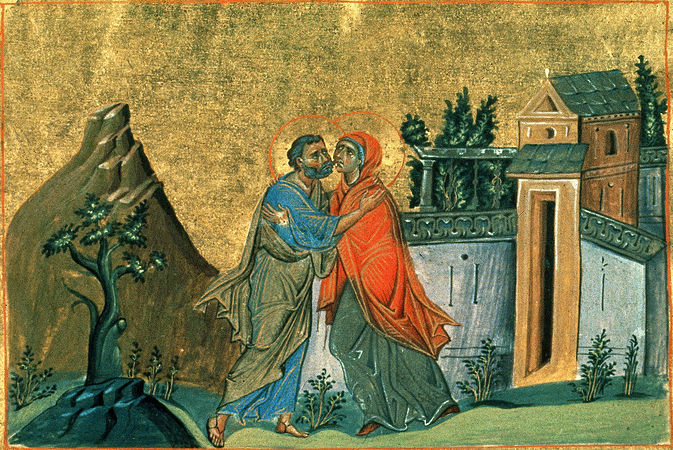 Conception of the Most-holy Theotokos 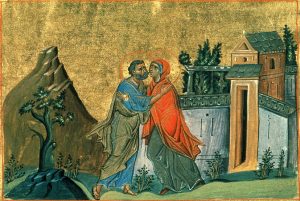 Saint Anna, the mother of the Virgin Mary, was the youngest daughter of the priest Nathan from Bethlehem, descended from the tribe of Levi. She married Saint Joachim (September 9), who was a native of Galilee.

For a long time Saint Anna was childless, but after twenty years, through the fervent prayer of both spouses, an angel of the Lord announced to them that they would be the parents of a daughter, Who would bring blessings to the whole human race.

The Orthodox Church does not accept the teaching that the Mother of God was exempted from the consequences of ancestral sin (death, corruption, sin, etc.) at the moment of her conception by virtue of the future merits of Her Son. Only Christ was born perfectly holy and sinless, as Saint Ambrose of Milan teaches in Chapter Two of his Commentary on Luke. The Holy Virgin was like everyone else in Her mortality, and in being subject to temptation, although She committed no personal sins. She was not a deified creature removed from the rest of humanity. If this were the case, She would not have been truly human, and the nature that Christ took from Her would not have been truly human either. If Christ does not truly share our human nature, then the possibilty of our salvation is in doubt.

“In the icon Saints Joachim and Anna are usually depicted with hands folded in prayer; their eyes are also directed upward and they contemplate the Mother of God, Who stands in the air with outstretched hands; under Her feet is an orb encircled by a serpent (symbolizing the devil), which strives to conquer all the universe by its power.”

There are also icons in which Saint Anna holds the Most Holy Virgin on her left arm as an infant. On Saint Anna’s face is a look of reverence. A large ancient icon, painted on canvas, is located in the village of Minkovetsa in the Dubensk district of Volhynia diocese. From ancient times this Feast was especially venerated by pregnant women in Russia.

Troparion of the Sunday, tone 3

Let the heavens rejoice, let the earth be glad! For the Lord has shown might with His arm, He has trampled down death by death. He has become the first-born of the dead. He has delivered us from the depths of hell, and has granted the world great mercy!

Troparion of the feast, tone 4

Today the bonds of barrenness are broken, God has heard the prayers of Joachim and Anna. He has promised them beyond all their hopes to bear the Maiden of God, by whom the uncircumscribed One was born as mortal Man; He commanded an angel to cry to her: “Rejoice, O full of grace, / the Lord is with you!”

Kontakion  of the feast, tone 4

Today the universe rejoices, for Anna has conceived the Theotokos through God’s dispensation, for she has brought forth the one who is to bear the ineffable Word!

Kontakion  of the Sunday, tone 3

On this day Thou didst rise from the tomb, O Merciful One, leading us from the gates of death. On this day Adam exults as Eve rejoices; with the prophets and patriarchs they unceasingly praise the divine majesty of Thy power!

22
For it is written that Abraham had two sons: the one by a bondwoman, the other by a freewoman.
23
But he who was of the bondwoman was born according to the flesh, and he of the freewoman through promise,
24
which things are symbolic. For these are the two covenants: the one from Mount Sinai which gives birth to bondage, which is Hagar –
25
for this Hagar is Mount Sinai in Arabia, and corresponds to Jerusalem which now is, and is in bondage with her children –
26
but the Jerusalem above is free, which is the mother of us all.
27
For it is written: “Rejoice, O barren, You who do not bear! Break forth and shout, You who are not in labor! For the desolate has many more children Than she who has a husband.”
28
Now we, brethren, as Isaac was, are children of promise.
29
But, as he who was born according to the flesh then persecuted him who was born according to the Spirit, even so it is now.
30
Nevertheless what does the Scripture say? “Cast out the bondwoman and her son, for the son of the bondwoman shall not be heir with the son of the freewoman.”
31
So then, brethren, we are not children of the bondwoman but of the free.

16
No one, when he has lit a lamp, covers it with a vessel or puts it under a bed, but sets it on a lampstand, that those who enter may see the light.
17
For nothing is secret that will not be revealed, nor anything hidden that will not be known and come to light.
18
Therefore take heed how you hear. For whoever has, to him more will be given; and whoever does not have, even what he seems to have will be taken from him.”
19
Then His mother and brothers came to Him, and could not approach Him because of the crowd.
20
And it was told Him by some, who said, “Your mother and Your brothers are standing outside, desiring to see You.”
21
But He answered and said to them, “My mother and My brothers are these who hear the word of God and do it.”

12
Then as He entered a certain village, there met Him ten men who were lepers, who stood afar off.
13
And they lifted up their voices and said, “Jesus, Master, have mercy on us!”
14
So when He saw them, He said to them, “Go, show yourselves to the priests.” And so it was that as they went, they were cleansed.
15
And one of them, when he saw that he was healed, returned, and with a loud voice glorified God,
16
and fell down on his face at His feet, giving Him thanks. And he was a Samaritan.
17
So Jesus answered and said, “Were there not ten cleansed? But where are the nine?
18
Were there not any found who returned to give glory to God except this foreigner?
19
And He said to him, “Arise, go your way. Your faith has made you well.”