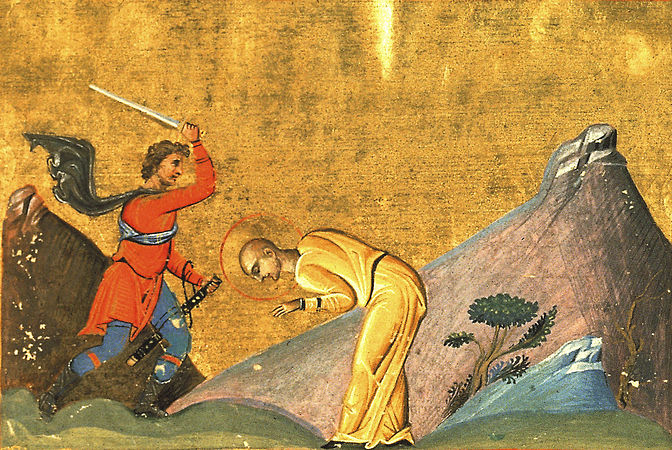 Afterfeast of the Theophany. Saturday after Theophany.
Martyr Tatiana of Rome and those who suffered with her (226-235). Ven. Martinian, Abbot of Belozersk (1483). Martyr Mertius of Mauretania (284-305). Martyr Peter Apselamus of Palestine (309-310). Ven. Eupraxia of Tabenna, in Egypt (393). The “AKATHIST” and “THE MILKGIVER” Icons of the Most-holy Theotokos. Icon of the Mother of God, the “Priestly”. 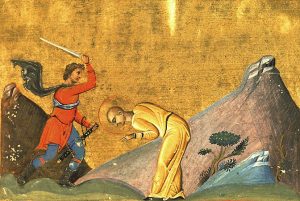 The Holy Virgin Martyr Tatiana was born into an illustrious Roman family, and her father was elected consul three times. He was secretly a Christian and raised his daughter to be devoted to God and the Church. When she reached the age of maturity, Tatiana decided to remain a virgin, betrothing herself to Christ. Disdaining earthly riches, she sought instead the imperishable wealth of Heaven. She was made a deaconess in one of the Roman churches and served God in fasting and prayer, tending the sick and helping the needy.

When Rome was ruled by the sixteen-year-old Alexander Severus (222-235), all power was concentrated in the hands of the regent Ulpian, an evil enemy and persecutor of Christians. Christian blood flowed like water. Tatiana was also arrested, and they brought her into the temple of Apollo to force her to offer sacrifice to the idol. The saint began praying, and suddenly there was an earthquake. The idol was smashed into pieces, and part of the temple collapsed and fell down on the pagan priests and many pagans. The demon inhabiting the idol fled screeching from that place. Those present saw its shadow flying through the air.

Then they tore holy virgin’s eyes out with hooks, but she bravely endured everything, praying for her tormentors that the Lord would open their spiritual eyes. And the Lord heard the prayer of His servant. The executioners saw four angels encircle the saint and beat her tormentors. A voice was heard from the heavens speaking to the holy virgin. Eight men believed in Christ and fell on their knees before Saint Tatiana, begging them to forgive them their sin against her. For confessing themselves Christians they were tortured and executed, receiving Baptism by blood.

The next day Saint Tatiana was brought before the wicked judge. Seeing her completely healed of all her wounds, they stripped her and beat her, and slashed her body with razors. A wondrous fragrance then filled the air. Then she was stretched out on the ground and beaten for so long that the servants had to be replaced several times. The torturers became exhausted and said that an invisible power was beating them with iron rods. Indeed, the angels warded off the blows directed at her and turned them upon the tormentors, causing nine of them to fall dead. They then threw the saint in prison, where she prayed all night and sang praises to the Lord with the angels.

A new morning began, and they took Saint Tatiana to the tribunal once more. The torturers beheld with astonishment that after such terrible torments she appeared completely healthy and even more radiant and beautiful than before. They began to urge her to offer sacrifice to the goddess Diana. The saint seemed agreeable, and they took her to the heathen temple. Saint Tatiana made the Sign of the Cross and began to pray. Suddenly, there was a crash of deafening thunder, and lightning struck the idol, the sacrificial offerings and the pagan priests.

Once again, the martyr was fiercely tortured. She was hung up and scraped with iron claws, and her breasts were cut off. That night, angels appeared to her in prison and healed her wounds as before. On the following day, they took Saint Tatiana to the circus and loosed a hungry lion on her. The beast did not harm the saint, but meekly licked her feet.

As they were taking the lion back to its cage, it killed one of the torturers. They threw Tatiana into a fire, but the fire did not harm the martyr. The pagans, thinking that she was a sorceress, cut her hair to take away her magical powers, then locked her up in the temple of Zeus.

On the third day, pagan priests came to the temple intending to offer sacrifice to Zeus. They beheld the idol on the floor, shattered to pieces, and the holy martyr Tatiana joyously praising the Lord Jesus Christ. The judge then condemned the valiant sufferer to be beheaded with a sword. Her father was also executed with her, because he had raised her to love Christ.

Troparion of the Theophany, tone 1

When You, O Lord were baptized in the Jordan The worship of the Trinity was made manifest For the voice of the Father bore witness to You And called You His beloved Son. And the Spirit, in the form of a dove, Confirmed the truthfulness of His word. O Christ, our God, You have revealed Yourself And have enlightened the world, glory to You!

Your lamb Tatiana, calls out to You, O Jesus, in a loud voice: “I love You, my Bridegroom, and in seeking You, I endure suffering. In baptism I was crucified so that I might reign in You, and I died so that I might live with You. Accept me as a pure sacrifice, for I have offered myself in love.” Through her prayers save our souls, since You are merciful.

In your sufferings you shone brightly in the royal purple of your blood, and like a beautiful dove you flew to heaven, passion-bearer Tatiana. Therefore, always pray for those who honor you.

Kontakion  of the Theophany, tone 4

Today You have shown forth to the world, O Lord, and the light of Your countenance has been marked on us. Knowing You, we sing Your praises. You have come and revealed Yourself, O unapproachable Light.