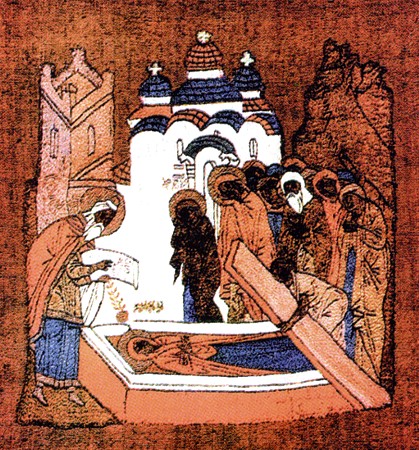 The Dormition of the Righteous Anna, mother of the Most-holy Theotokos. Holy Women Olympias (Olympiada—408-410) the Deaconess, of Constantinople, and the Virgin Eupraxia of Tabenna (413). Ven. Makáry, Abbot of Zheltovódsk and Unzha (1444). Commemoration of the Holy 165 Fathers of the Fifth Ecumenical Council (553). 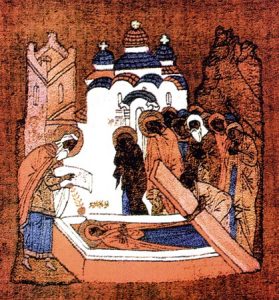 Saint Anna was the daughter of the priest Matthan and his wife Mary. She was of the tribe of Levi and the lineage of Aaron. According to Tradition, she died peacefully in Jerusalem at age 79, before the Annunciation to the Most Holy Theotokos.

During the reign of Saint Justinian the Emperor (527-565), a church was built in her honor at Deutera. Emperor Justinian II (685-695; 705-711) restored her church, since Saint Anna had appeared to his pregnant wife. It was at this time that her body and maphorion (veil) were transferred to Constantinople.

Divinely-wise Anna, you carried in your womb the pure Mother of God, who gave life to our Life. / Therefore, you are now carried joyfully to the inheritance of heaven, / to the abode of those who rejoice in glory, / where you seek forgiveness of sins for those who faithfully honor you, ever blessed one.

We celebrate the memory of the progenitors of Christ, / and with faith we ask their help, / that deliverance from every affliction be granted to those who cry out: / “Be with us, O God, who in Your good pleasure glorified them.”

18
Let no one deceive himself. If anyone among you seems to be wise in this age, let him become a fool that he may become wise.
19
For the wisdom of this world is foolishness with God. For it is written, “He catches the wise in their own craftiness”;
20
and again, “The LORD knows the thoughts of the wise, that they are futile.”
21
Therefore let no one boast in men. For all things are yours:
22
whether Paul or Apollos or Cephas, or the world or life or death, or things present or things to come – all are yours.
23
And you are Christ’s, and Christ is God’s.

36
Then Jesus sent the multitude away and went into the house. And His disciples came to Him, saying, “Explain to us the parable of the tares of the field.”
37
He answered and said to them: “He who sows the good seed is the Son of Man.
38
The field is the world, the good seeds are the sons of the kingdom, but the tares are the sons of the wicked one.
39
The enemy who sowed them is the devil, the harvest is the end of the age, and the reapers are the angels.
40
Therefore as the tares are gathered and burned in the fire, so it will be at the end of this age.
41
The Son of Man will send out His angels, and they will gather out of His kingdom all things that offend, and those who practice lawlessness,
42
and will cast them into the furnace of fire. There will be wailing and gnashing of teeth.
43
Then the righteous will shine forth as the sun in the kingdom of their Father. He who has ears to hear, let him hear!