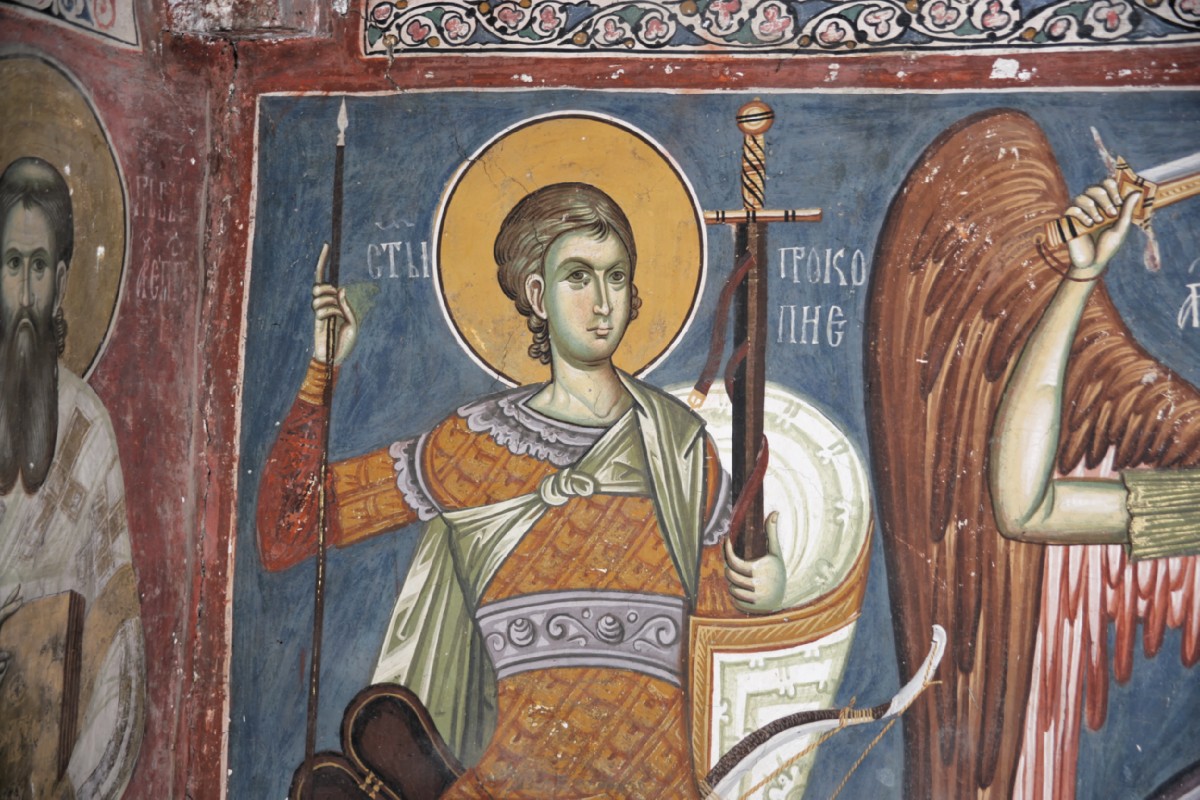 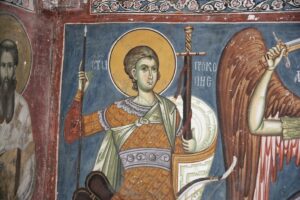 The Holy Great Martyr Procopius, in the world Neanius, a native of Jerusalem, lived and suffered during the reign of the emperor Diocletian (284-305). His father, an eminent Roman by the name of Christopher, was a Christian, but the mother of the saint, Theodosia, remained a pagan. He was early deprived of his father, and the young child was raised by his mother. Having received an excellent secular education, he was introduced to Diocletian in the very first year of the emperor’s accession to the throne, and he quickly advanced in government service. Towards the year 303, when open persecution against Christians began, Neanius was sent as a proconsul to Alexandria with orders to mercilessly persecute the Church of God.

On the way to Egypt, near the Syrian city of Apamea, Neanius had a vision of the Lord Jesus, similar to the vision of Saul on the road to Damascus. A divine voice exclaimed, “Neanius, why do you persecute Me?”

Neanius asked, “Who are you, Lord?”

“I am the crucified Jesus, the Son of God.”

At that moment a radiant Cross appeared in the air. Neanius felt an inexpressible joy and spiritual happiness in his heart and he was transformed from being a persecutor into a zealous follower of Christ. From this point in time Neanius became favorably disposed towards Christians and fought victoriously against the barbarians.

The words of the Savior came true for the saint, “A man’s foes shall be those of his own household” (Mt. 10:36). His mother, a pagan herself, went to the emperor to complain that her son did not worship the ancestral gods. Neanius was summoned to the procurator Judaeus Justus, where he was solemnly handed the decree of Diocletian. Having read through the blasphemous directive, Neanius quietly tore it up before the eyes of everyone. This was a crime, which the Romans regarded as an “insult to authority.” Neanius was held under guard and in chains sent to Caesarea of Palestine, where the Apostle Paul once languished. After terrible torments, they threw the saint into a dark prison. That night, a light shone in the prison, and the Lord Jesus Christ Himself baptized the suffering confessor, and gave him the name Procopius.

Repeatedly they led Saint Procopius to the courtroom, demanding that he renounce Christ, and they subjected him to more tortures. The stolidity of the martyr and his fiery faith brought down God’s abundant grace on those who witnessed the execution.

Inspired by the example of Procopius, many of the holy martyr’s former guards and Roman soldiers went beneath the executioner’s sword together with their tribunes Nikostrates and Antiochus. Twelve Christian women received martyr’s crowns, after they came to the gates of the Caesarea Praetorium.

Struck by the great faith and courage of the Christians, and seeing the firmness of her son in bearing terrible sufferings, Theodosia became repentant and stood in the line of confessors and was executed. Finally the new procurator, Flavian, convinced of the futility of the tortures, sentenced the holy Great Martyr Procopius to beheading by the sword. By night Christians took up his much-tortured body, and with tears and prayers, they committed it to the earth. This was the first martyrdom at Caesarea (303).

Troparion of the Sunday, tone 4

When the women disciples of the Lord learned from the angel / the joyous message of Thy resurrection, / they cast away the ancestral curse / and elatedly told the Apostles: / Death is overthrown! / Christ God is risen, / granting the world great mercy!

Your holy martyr Procopius, O Lord, / through his suffering has received an incorruptible crown from You, our God. / For having Your strength, he laid low his adversaries, / and shattered the powerless boldness of demons. / Through his intercessions save our souls!

Set ablaze by divine zeal for Christ and protected by the might of the Cross, / you cast down the insolence and boldness of the enemy, Procopius. / You exalted the honorable Church, / excelling in faith and giving light to us all!

Kontakion of the Sunday, tone 4

My Savior and Redeemer as God rose from the tomb and delivered the earthborn from their chains. He has shattered the gates of hell, and as Master, He has risen on the third day!

1
Brethren, my heart’s desire and prayer to God for Israel is that they may be saved.
2
For I bear them witness that they have a zeal for God, but not according to knowledge.
3
For they being ignorant of God’s righteousness, and seeking to establish their own righteousness, have not submitted to the righteousness of God.
4
For Christ is the end of the law for righteousness to everyone who believes.
5
For Moses writes about the righteousness which is of the law, “The man who does those things shall live by them.”
6
But the righteousness of faith speaks in this way, “Do not say in your heart, ‘Who will ascend into heaven?’ (that is, to bring Christ down from above)
7
or, ‘Who will descend into the abyss?’” (that is, to bring Christ up from the dead).
8
But what does it say? “The word is near you, in your mouth and in your heart” (that is, the word of faith which we preach):
9
that if you confess with your mouth the Lord Jesus and believe in your heart that God has raised Him from the dead, you will be saved.
10
For with the heart one believes unto righteousness, and with the mouth confession is made unto salvation.

28
When He had come to the other side, to the country of the Gergesenes, there met Him two demon-possessed men, coming out of the tombs, exceedingly fierce, so that no one could pass that way.
29
And suddenly they cried out, saying, “What have we to do with You, Jesus, You Son of God? Have You come here to torment us before the time?”
30
Now a good way off from them there was a herd of many swine feeding.
31
So the demons begged Him, saying, “If You cast us out, permit us to go away into the herd of swine.”
32
And He said to them, “Go.” So when they had come out, they went into the herd of swine. And suddenly the whole herd of swine ran violently down the steep place into the sea, and perished in the water.
33
Then those who kept them fled; and they went away into the city and told everything, including what had happened to the demon-possessed men.
34
And behold, the whole city came out to meet Jesus. And when they saw Him, they begged Him to depart from their region.
1
So He got into a boat, crossed over, and came to His own city.