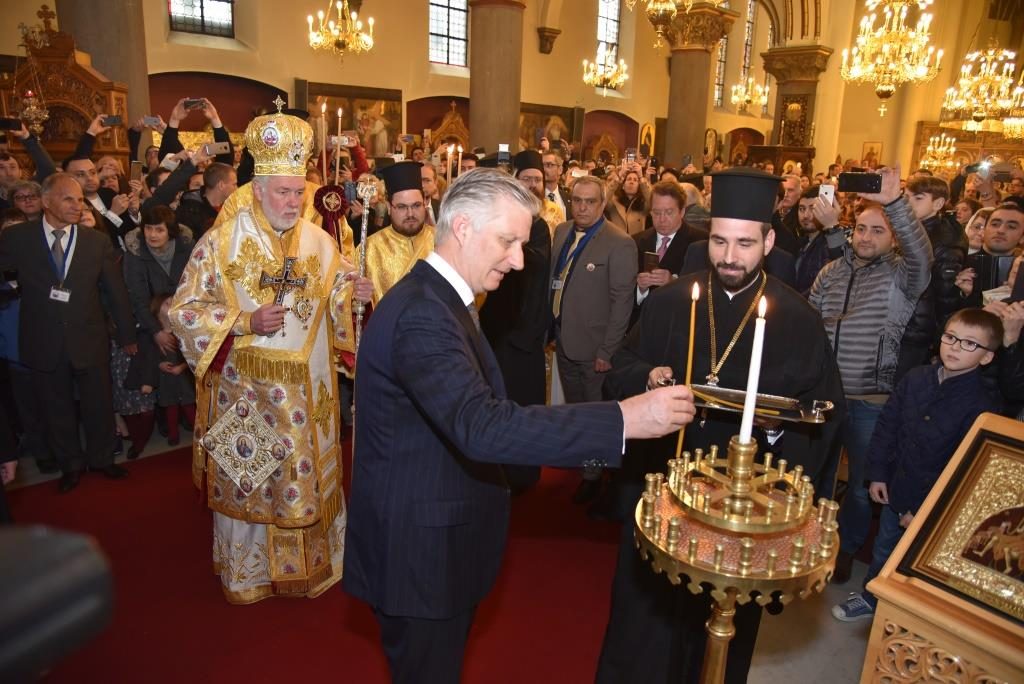 On Sunday March 17, King Philippe of Belgium participated in the Sunday of Orthodoxy in Saints Archangels Michael and Gabriel Orthodox Cathedral, Brussels. It was also the celebration of the 50th anniversary of the Orthodox Archdiocese of Belgium (Ecumenical Patriarchate).
Metropolitan Athenagoras welcomed King Philippe and delivered a speech in which he recalled the history of Orthodoxy in Belgium.
The photo album (including the one above) of the event is available online.

Here is the translation of the Metropolitan’s speech:

To be able to welcome His Majesty our King, today in this Orthodox cathedral, is an immeasurable honor and a special joy for us all here present.

We have chosen to invite Your Majesty on this Sunday of Orthodoxy, which commemorates the victory over iconoclasm and therefore, the restoration of the veneration of icons. It was the 7th and last Ecumenical Council, convened in Nicaea in 787 and common to all Christians, that declared icons should be venerated, as well as the precious and life-giving Cross, and the Holy Bible. Since 1983, the Sunday of Orthodoxy is one of the highlights of the expression of the unity of Orthodox Christians in Belgium. This day is celebrated with a common liturgy, all nationalities combined.

This year, we are also celebrating the 50th anniversary of the creation of our archdiocese, which has jurisdiction over Belgium, the Netherlands, and Luxembourg.
The presence of Orthodoxy in the Benelux goes back to 1752, when Greek merchants founded the first Orthodox parish in Amsterdam. It was dedicated to St. Catherine. Orthodoxy was the great unknown in the West. This motivated these merchants to publish a small liturgical book in 1760, with the translation in Dutch of the Divine Liturgy of St. John Chrysostom.
When Greece became independent, at the same time as our country, the Greek merchants went back home and the chapel was used by Anna Pavlovna, then the Queen of the Netherlands. Before becoming queen, she had regularly stayed in Brussels, in the current Academy Palace, right next to the Royal Palace. She had an Orthodox chapel built in this palace, possibly the very first Orthodox chapel in our country. A second chapel was discovered in 1862 in the buildings of the Russian Embassy in Brussels. It was intended for the staff of this embassy.
In 1900, a first Orthodox parish was created in Antwerp for Greek sailors. Since then, a permanent Orthodox presence has developed, culminating in the massive arrival of Greek workers invited by our civil authorities. This eventually led to the founding of the Orthodox Archdiocese of Belgium and the exarchate of the Netherlands and Luxembourg, whose 50th anniversary we are celebrating this year. Next November, we will celebrate this golden jubilee with His All-Holiness the Ecumenical Patriarch Bartholomew, who will preside at the Divine Liturgy in this same cathedral.

In 1985, Orthodox worship was officially recognized in our country, and so our Church was able to develop into a small, but dynamic Church, growing through migration. It has received a place in our society and works in harmony with senior representatives of other Christian Churches and monotheistic religions. The Metropolitan Archbishop of the Ecumenical Patriarchate represents the entire Orthodox Church of our country, including the ancient Eastern Churches.

Hence our pleasure to welcome also the Minister of Justice, Mr. Koen Geens, and the high representatives of the recognized religions, in particular His Eminence Cardinal Jozef De Kesel, whom I have known since I was a student in high school, where he was teaching. In Mr Koen Geens, we have a Minister of Justice who supports us as ever and who with his team, ensures good cooperation between the State and the religions.

Our Church is very grateful for the place assigned to it in our society. It is aware that we must work together for a blessed future for our country and its people. We know the important role your Majesty can play in this regard. Hence our intercessory prayer in all the Orthodox parishes at each liturgical celebration, “for our King Philippe and Queen Mathilde, for the government of our country, and for all who live here“.

Your visit today will remain forever etched in the memory of each one of us. May this visit and this meeting also remain a beautiful memory for you, Sir. I hope we are allowed to offer you an icon of your patron saint, the Holy Apostle Philip, and flowers in memory of this visit, as a humble expression of gratitude to your illustrious person.

We pray that God will grant your Majesty, the Queen, and all the members of the Royal Family good health and many years.