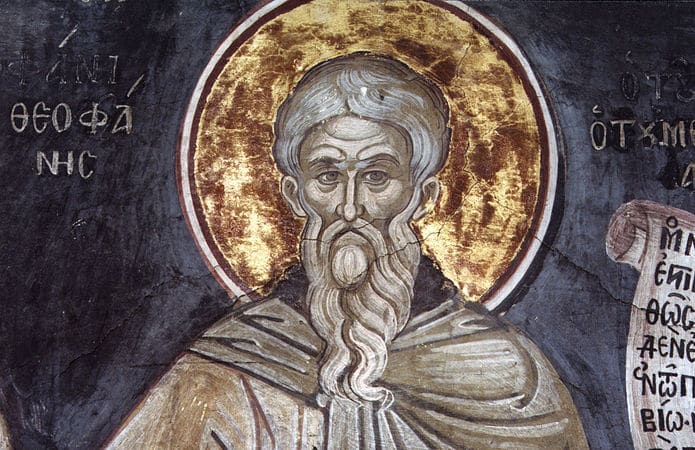 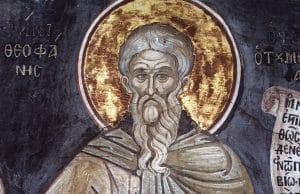 Saint Theophanes the Confessor was born in 759 at Constantinople into a pious and renowned family. His father was a relative of the Byzantine emperor Leo the Isaurian (717-741). Three years after Theophanes was born, his father died, leaving his family under the care of the emperor himself.

Theophanes grew up at the court and became a dignitary under the emperor Leo IV the Khazar (775-780). His position obliged him to enter into marriage, but he persuaded his bride to live with him in virginity.

After the death of his parents, Theophanes and his wife visited monasteries in the Sygrian district (Asia Minor). Theophanes met the Elder Gregory Stratitios, who predicted to Theophanes’ wife that her husband would earn the crown of martyrdom.

Later the wife of Theophanes was tonsured a nun in one of the monasteries in Bithynia, and Theophanes went to a monastery in the Cyzicus region. With the blessing of his Elder, Theophanes founded the Kalonymon monastery on an island in the Sea of Marmara and secluded himself in his cell, transcribing books. Theophanes attained a high degree of skill in this occupation.

Later, Saint Theophanes founded another monastery in Sygria, at a place called the “Big Settlement”, and became its igumen. He participated in all the work of the monastery, and was an example to all in his love for work and ascetical effort. He received from the Lord the gift of wonderworking, healing the sick, and casting out demons.

The Seventh Ecumenical Council met in Nicea in 787, which condemned the heresy of Iconoclasm. Saint Theophanes was also invited to the Council. He arrived dressed in his tattered garments, but he revealed his wisdom in affirming the veneration of the holy icons.

At the age of fifty, Saint Theophanes fell grievously ill and he suffered terribly until the day he died. Even on his deathbed, the saint continued to work. He wrote his CHRONOGRAPHIA, a history of the Christian Church covering the years 285-813. This work has remained an invaluable source for the history of the Church.

During the reign of the emperor Leo the Armenian (813-820), when the saint was advanced in age, the Iconoclast heresy returned. They demanded that Saint Theophanes accept the heresy, but he firmly refused and was locked up in prison. His “Big Settlement” monastery was put to the torch. The holy confessor died in 818 after twenty-three days in prison.

After the death of the impious emperor Leo the Armenian, the “Big Settlement” monastery was restored and the relics of the holy confessor were transferred there.

By a flood of tears you made the desert fertile / And by your longing for God you brought forth fruits in abundance. / By the radiance of miracles you illuminated the whole universe. / O our holy Father Theophanes, pray to Christ our God to save our souls.

Receiving from God a revelation from the heights, thou swiftly didst leave the turmoil of the world, O Saint; and thou as a monk didst receive the power to perform miracles and the grace of true prophecy, depriving thyself of riches and thy spouse.