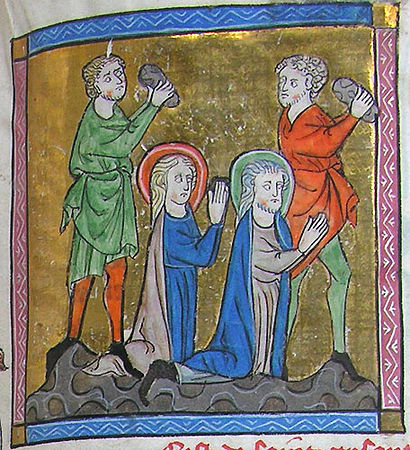 Martyrs Chrysanthus and Daria, and those with them at Rome: Claudius, Hilaria, Jason, Maurus, Diodorus the Presbyter, and Marianus the Deacon (283). St. Innocent of Komel’, disciple of St. Nilus of Sora (Vologdá—1521). Martyr Pancharius, at Nicomedia (ca. 302).

SAINT CHRYSANTHUS AND HIS WIFE DARIA 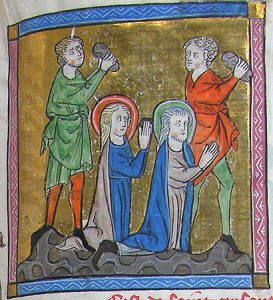 The Holy Martyrs Chrysanthus and Daria and with them the Martyrs Claudius the Tribune with his wife Hilaria and their sons Jason and Maurus, and Diodorus the Presbyter and Marianus the Deacon.

Saint Chrysanthus came from a pagan family who had moved to Rome from Alexandria. He received a fine education, and among the books he read were those in which pagans discussed Christianity. The young man, however, wanted to read books written by Christians themselves. He finally managed to find a copy of the New Testament, which enlightened his rational soul.

Seeking someone to instruct him in the Holy Scriptures, he found the presbyter Carpophoros hiding from persecution, and received holy Baptism from him. After this, he began to preach the Gospel. Chrysanthus’ father tried to turn his son from Christianity, and finally married him to Daria, a priestess of Minerva.

The people of Rome complained to the eparch Celerinus that Saints Chrysanthus and Daria were preaching celibacy and attracting too many young men and women to monasticism. Saint Chrysanthus was sent to the tribune Claudius for torture.

The torments, however, did not shake the bravery of the young martyr, since the power of God clearly aided him. Struck by this, the tribune Claudius himself came to believe in Christ and accepted holy Baptism together with his wife Hilaria, their sons Jason and Maurus, and all his household and soldiers. When news of this reached the emperor Numerian (283-284), he commanded them all to be executed. The Martyr Claudius was drowned in the sea, and his sons and soldiers were beheaded. Christians buried the bodies of the holy martyrs in a nearby cave, and Saint Hilaria constantly went there to pray. Once, they followed her and led her off for torture. The saint asked that they give her a few moments to pray, and as soon as she finished, she gave up her soul to God. A servant buried the saint in the cave beside her sons.

The torturers sent Saint Daria to a brothel, where she was protected by a lion sent by God. A certain man who tried to defile the saint was knocked to the ground and pinned down by the lion, but the lion did not kill him. The martyr preached to them about Christ and set them to the path of salvation.

They threw Saint Chrysanthus into a foul-smelling pit, into which all the filth of the city flowed. But a heavenly light shone on him, and the pit was filled with a sweet fragrance.

Then the emperor Numerian ordered Saints Chrysanthus and Daria to be turned over to the executioners. After many cruel tortures, the martyrs were buried alive in the ground.

In a cave near the place of execution, Christians began to gather to honor the anniversary of the saints’ martyrdom. They celebrated Church services and partook of the Holy Mysteries. Learning of this, the pagan authorities sealed the entrance to the cave, and those within received the crown of martyrdom.

Two of these martyrs are known by name: the Presbyter Diodorus and the Deacon Marianus.

Troparion of the saints, tone 1

Kontakion of the saints, tone 1

In the sweet fragrance of holiness, O Chrysanthus, / you drew Daria to saving knowledge. / Together in contest you routed the serpent, / the author of all evil, / and were worthily taken up to the heavenly realms.

24
The Lord of hosts has sworn, saying, “Surely, as I have thought, so it shall come to pass, and as I have purposed, so it shall stand:
25
That I will break the Assyrian in My land, and on My mountains tread him underfoot. Then his yoke shall be removed from them, and his burden removed from their shoulders.
26
This is the purpose that is purposed against the whole earth, and this is the hand that is stretched out over all the nations.
27
For the Lord of hosts has purposed, and who will annul it? His hand is stretched out, and who will turn it back?”
28
This is the burden which came in the year that King Ahaz died.
29
“Do not rejoice, all you of Philistia, because the rod that struck you is broken; for out of the serpent’s roots will come forth a viper, and its offspring will be a fiery flying serpent.
30
The firstborn of the poor will feed, and the needy will lie down in safety; I will kill your roots with famine, and it will slay your remnant.
31
Wail, O gate! Cry, O city! All you of Philistia are dissolved; for smoke will come from the north, and no one will be alone in his appointed times.”
32
What will they answer the messengers of the nation? That the Lord has founded Zion, and the poor of His people shall take refuge in it.

21
And the Lord smelled a soothing aroma. Then the Lord said in His heart, “I will never again curse the ground for man’s sake, although the imagination of man’s heart is evil from his youth; nor will I again destroy every living thing as I have done.
22
While the earth remains, seedtime and harvest, cold and heat, winter and summer, and day and night shall not cease.”
1
So God blessed Noah and his sons, and said to them: “Be fruitful and multiply, and fill the earth.
2
“And the fear of you and the dread of you shall be on every beast of the earth, on every bird of the air, on all that move on the earth, and on all the fish of the sea. They are given into your hand.
3
Every moving thing that lives shall be food for you. I have given you all things, even as the green herbs.
4
But you shall not eat flesh with its life, that is, its blood.
5
Surely for your lifeblood I will demand a reckoning; from the hand of every beast I will require it, and from the hand of man. From the hand of every man’s brother I will require the life of man.
6
Whoever sheds man’s blood, by man his blood shall be shed; for in the image of God He made man.
7
And as for you, be fruitful and multiply; Bring forth abundantly in the earth And multiply in it.”

19
As righteousness leads to life, so he who pursues evil pursues it to his own death.
20
Those who are of a perverse heart are an abomination to the Lord, but the blameless in their ways are His delight.
21
Though they join forces, the wicked will not go unpunished; but the posterity of the righteous will be delivered.
22
As a ring of gold in a swine’s snout, so is a lovely woman who lacks discretion.
23
The desire of the righteous is only good, but the expectation of the wicked is wrath.
24
There is one who scatters, yet increases more; and there is one who withholds more than is right, but it leads to poverty.
25
The generous soul will be made rich, and he who waters will also be watered himself.
26
The people will curse him who withholds grain, but blessing will be on the head of him who sells it.
27
He who earnestly seeks good finds favor, but trouble will come to him who seeks evil.
28
He who trusts in his riches will fall, but the righteous will flourish like foliage.
29
He who troubles his own house will inherit the wind, and the fool will be servant to the wise of heart.
30
The fruit of the righteous is a tree of life, and he who wins souls is wise.
31
If the righteous will be recompensed on the earth, how much more the ungodly and the sinner.
1
Whoever loves instruction loves knowledge, but he who hates correction is stupid.
2
A good man obtains favor from the Lord, but a man of wicked intentions He will condemn.
3
A man is not established by wickedness, but the root of the righteous cannot be moved.
4
An excellent wife is the crown of her husband, but she who causes shame is like rottenness in his bones.
5
The thoughts of the righteous are right, but the counsels of the wicked are deceitful.
6
The words of the wicked are, “Lie in wait for blood,” but the mouth of the upright will deliver them.