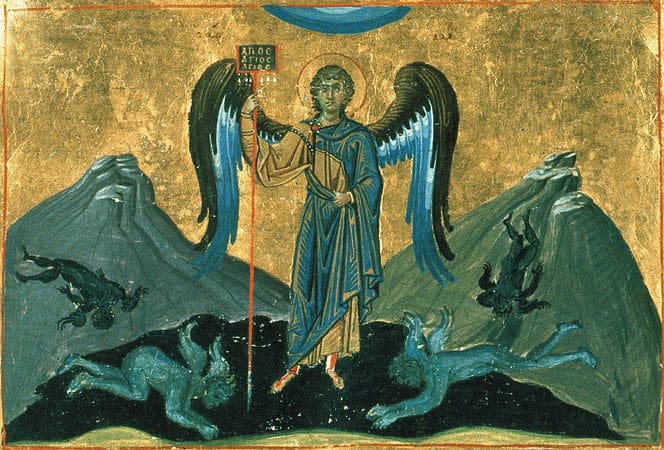 SYNAXIS OF THE ARCHANGEL MICHAEL AND THE OTHER BODILESS POWERS: Archangels Gabriel, Raphael, Uriel, Selaphiel, Jegudiel, and Barachiel.

SYNAXIS OF THE ARCHANGEL MICHAEL AND THE OTHER BODILESS POWERS

The Synaxis of the Chief of the Heavenly Hosts, Archangel Michael and the Other Heavenly Bodiless Powers: Archangels Gabriel, Raphael, Uriel, Selaphiel, Jehudiel, Barachiel, and Jeremiel was established at the beginning of the fourth century at the Council of Laodicea, which met several years before the First Ecumenical Council. The 35th Canon of the Council of Laodicea condemned and denounced as heretical the worship of angels as gods and rulers of the world, but affirmed their proper veneration.

A Feastday was established in November, the ninth month after March (with which the year began in ancient times) since there are Nine Ranks of Angels. The eighth day of the month was chosen for the Synaxis of all the Bodiless Powers of Heaven since the Day of the Dread Last Judgment is called the Eighth Day by the holy Fathers. After the end of this age (characterized by its seven days of Creation) will come the Eighth Day, and then “the Son of Man shall come in His Glory and all the holy Angels with Him” (Mt. 25:31).

All the Ranks of the Heavenly Powers are called angels, although each has its own name and position by virtue of their service. The Lord reveals His will to the highest ranks of the angels, and they in turn inform the others.

Over all the Nine Ranks, the Lord appointed the Holy Archangel Michael (his name in Hebrew means “who is like unto God”), the faithful servitor of God, as Chief Commander. He cast down from Heaven the arrogantly proud Lucifer and the other fallen spirits when they rebelled against God. Michael summoned the ranks of angels and cried out, “Let us attend! Let us stand aright before our Creator and do not consider doing what is displeasing unto God!”

According to Church Tradition, and in the church services to the Archangel Michael, he participated in many other Old Testament events.

On icons the Archangels are depicted in according to the character of their service.

Troparion of the Archangels, tone 4
Commanders of the heavenly hosts, we who are unworthy beseech you, by your prayers encompass us beneath the wings of your immaterial glory, and faithfully preserve us who fall down and cry to you: “Deliver us from all harm, for you are the commanders of the powers on high!”

Kontakion of the Archangels, tone 2
Commanders of God’s armies and ministers of the divine glory, princes of the bodiless angels and guides of mankind, ask for what is good for us, and for great mercy, / supreme commanders of the Bodiless Hosts.

2
For if the word spoken through angels proved steadfast, and every transgression and disobedience received a just reward,
3
how shall we escape if we neglect so great a salvation, which at the first began to be spoken by the Lord, and was confirmed to us by those who heard Him,
4
God also bearing witness both with signs and wonders, with various miracles, and gifts of the Holy Spirit, according to His own will?
5
For He has not put the world to come, of which we speak, in subjection to angels.
6
But one testified in a certain place, saying: “What is man that You are mindful of him, or the son of man that You take care of him?
7
You have made him a little lower than the angels; You have crowned him with glory and honor, and set him over the works of Your hands.
8
You have put all things in subjection under his feet.” For in that He put all in subjection under him, He left nothing that is not put under him. But now we do not yet see all things put under him.
9
But we see Jesus, who was made a little lower than the angels, for the suffering of death crowned with glory and honor, that He, by the grace of God, might taste death for everyone.
10
For it was fitting for Him, for whom are all things and by whom are all things, in bringing many sons to glory, to make the captain of their salvation perfect through sufferings.

16
He who hears you hears Me, he who rejects you rejects Me, and he who rejects Me rejects Him who sent Me.”
17
Then the seventy returned with joy, saying, “Lord, even the demons are subject to us in Your name.”
18
And He said to them, “I saw Satan fall like lightning from heaven.
19
Behold, I give you the authority to trample on serpents and scorpions, and over all the power of the enemy, and nothing shall by any means hurt you.
20
Nevertheless do not rejoice in this, that the spirits are subject to you, but rather rejoice because your names are written in heaven.”
21
In that hour Jesus rejoiced in the Spirit and said, “I thank You, Father, Lord of heaven and earth, that You have hidden these things from the wise and prudent and revealed them to babes. Even so, Father, for so it seemed good in Your sight.