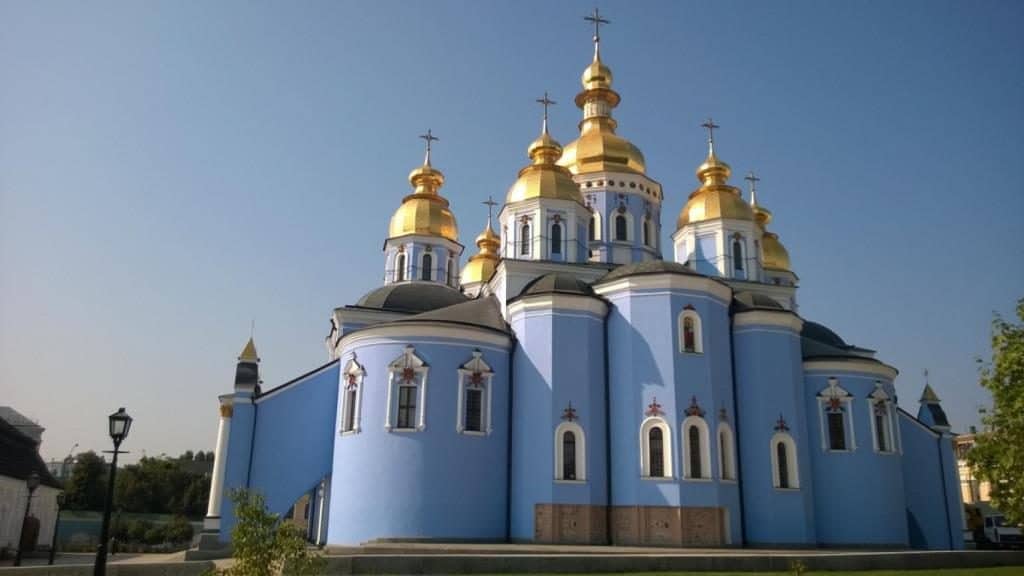 Early March 2019, the French monthly Esprit published an article by researcher Céline Marangé working at the Institute for Strategic Research (IRSEM, Paris). It is entitled “The autocephalous Church of Ukraine” and gives a summary of the Orthodox ecclesial situation in Ukraine. Please find here our English translation:

The January 5, 2019 recognition of a new Church in Ukraine is of great symbolic significance for the country, still prey to war five years after the annexation of Crimea and the outbreak of hostilities in the Donbass. With this new attribute of independence, Ukraine continues to emancipate from Russia and asserts itself as a nation state.

This event undoubtedly marks a political victory for Ukrainian President Petro Poroshenko, a candidate for re-election, only a few months away from an election whose outcome remains uncertain. However, it has sown discord among Orthodox believers in Ukraine and caused controversy throughout world Orthodoxy. Metropolitan Epifaniy’s enthronement took place on February 4, 2019 in Saint Sophia Cathedral in Kyiv, in the presence of the Ukrainian President and a delegation of the Ecumenical Patriarchate of Constantinople led by Metropolitan Emmanuel of France. But the other thirteen autocephalous Churches shunned the ceremony and did not send any congratulatory message to the new primate, which was an implicit way of expressing their disapproval of recent decisions made by the Ecumenical Patriarchate of Constantinople, who has been considered as “first among his peers” (primus inter pares) for a millennium. At first sight, the creation of an autocephalous Church in Ukraine appears as a setback for the Russian Church and a loss of power for the Kremlin. In fact, the situation is more mixed, and Moscow could take advantage of this imbroglio in order to stir up dissensions in Ukraine and strengthen its positions in regards to other autocephalous Churches.

The origins of the dissension

In deciding to grant autocephaly to Ukraine, Patriarch Bartholomew wanted to bring together all the Ukrainian Orthodox within the same Church, following the principle of accommodation according to which the organization of the Church follows the political organization. He was thus answering requests sent by all the Ukrainian presidents, with the exception of Viktor Yanukovych, to his patriarchate since 1992, as well as the request of the Verkhovna Rada (the unicameral parliament of Ukraine), which had promulgated a resolution in this regard on April 19, 2018. He may also have been trying to defend an understanding of the primacy of the Constantinople Patriarchate, the only one capable of granting autocephaly, an understanding that is no longer unanimous in the Church.

On October 11, 2018, the Synod of Constantinople thus revoked the 1686 transfer of jurisdiction from the Kyiv metropolis to the Moscow Patriarchate, thereby asserting its canonical jurisdiction over Ukraine. It also accepted back in communion two Ukrainian Orthodox Churches previously considered “schismatic”, without going through a canonical court.

The first in order of seniority was the Ukrainian autocephalous Church, which officially numbers 1,167 parishes [1]. Historically linked to the Ukrainian nationalist movement, this Church was established at the end of the civil war, on the ruins of the Russian empire. In 1921, a synod of bishops from all over Ukraine declared the independence of the Ukrainian Orthodox Church from the Russian Orthodox Church. A few months later, the Red Army defeated the troops of Symon Petliura’s Directory, ending the civil war and the dreams of Ukrainian independence. After the formation of the Soviet Union in December 1922, this Church suffered the Bolshevik repression. The GPU (the secret police) arrested the most eminent members of the clergy, as well as hundreds of priests. In 1930, this Church was forced to dissolve. However, it continued to exist abroad, particularly in Canada which received a large Ukrainian diaspora. Headed by Metropolitan Makariy since 2015, it has been enjoying the active support of the Ukrainian Orthodox communities in America attached to the Ecumenical Patriarchate of Constantinople. Its recognition is crowning the long-standing efforts of its hierarchy to legalize its canonical status.

The second larger church in number, was the “Kyiv Patriarchate”, born after the collapse of the Soviet Union, and thanks to the will of its charismatic leader, Filaret. With 5,717 parishes, it counted among its faithful both the Ukrainian president and its main rival in the 2019 presidential election, Yulia Tymoshenko. The son of a Donbass miner and orphan of war, Filaret exercised very high functions within the Russian Orthodox Church during the Soviet time: bishop at 33, he maintained close relations with the KGB, by his own admission, and violated the law of celibacy for bishops. In the spring of 1990, he became locum tenens of the Russian Orthodox Church, whose throne he was coveting. But in the summer of 1990, the synod preferred Alexy II, coming from a line of priests. After 1991, Filaret broke with the Moscow Patriarchate and proclaimed the “Kyiv patriarchate”, referring to the Kyiv metropolis founded in 991. He headed this Church in 1995 and was excommunicated by the Moscow Patriarchate in 1997. He gradually erased his sulfurous past by presenting himself as a herald of independence and defending autocephaly. On October 11, 2018, Patriarch Bartholomew restored him to his priestly and episcopal dignity, lifting the anathema that had hung on him for twenty-one years. Departing from the tradition according to which only the Church that pronounced an excommunication can annul it, Patriarch Bartholomew thus affirmed his superiority over the Russian patriarch.

The persistence of ecclesial divisions

The creation of an autocephalous Church in Ukraine initially implied the unification of all the Orthodox and the merging of the various Orthodox Churches in the country. However, the Ukrainian Orthodox Church of the Moscow Patriarchate immediately ruled out participating in the process of “reunification”, on the basis that Filaret had been excommunicated and that his Church was schismatic, or even heretical. Attached to tradition, this Church “states the identity of a single Slav culture, common to Russia, Belarus and Ukraine, the existence of a single people in the three countries where the Orthodox religion is the unifying element, without any national distinction [2]”. Like the Church in Belarus, it enjoys a certain autonomy, but its primate, called an exarch of the patriarch of Moscow, is canonically submitted to the Russian Church which confirms his appointment. It is also the largest in number, on paper at least, counting 12,348 parishes as of January 1, 2018, mostly present in the east of Ukraine.

On October 15, 2018, in response to the decisions made on October 11, the Moscow Patriarchate and the “canonical” Churches attached to it announced a third-degree rupture with the Patriarchate of Constantinople. They ceased all Eucharistic communion with it and with the Ukrainian Churches it had just taken in, and forbade their faithful to pray and receive communion in churches belonging to the Ecumenical Patriarchate. It immediately became clear that the granting of autocephaly to Ukraine would lead to the coexistence of two “canonical” Churches on one territory, a territory with two autocephalous Churches in a state of schism and vying for the canonical jurisdiction: the patriarchates of Moscow and Constantinople. Several Churches publicly expressed their disagreement with the Ecumenical Patriarchate’s plans, and unsuccessfully asked for a Pan-Orthodox Council to resolve the Ukrainian issue.

Postponed twice, the unification council of the Ukrainian Church finally took place in Kyiv on December 15, 2018. President Poroshenko assured Patriarch Bartholomew that a dozen bishops of the Ukrainian Church of the Moscow Patriarchate would join the unified Church and set the examples for more. However, only two bishops crossed the Rubicon, while the eighty-eight others willy-nilly reaffirmed their loyalty to their primate, Metropolitan Onufriy, a respected personality whose reputation is not tainted by a taste for luxury and power, as may be the case with other hierarchs, such as Patriarch Kirill of Moscow.

Behind the scenes, fierce negotiations were going on to choose the patriarch of the unified Church. Filaret, 89, immediately announced that he would be the patriarch of the new Church. But Bartholomew decided otherwise, asking him and Makariy to withdraw. Filaret finally desisted, demanding in exchange to be named the “honorary patriarch” and to see his contribution to autocephaly recognized in the proclamation. He also asked and obtained that Metropolitan Epifaniy, 39, his protégé, would head the new Church.

Other unresolved issues are likely to deepen social tensions and territorial divisions in Ukraine. First of all, it will be necessary to define the status of the Ukrainian Orthodox Church of the Moscow Patriarchate, as some Ukrainian politicians have called for it to be banned. To date, some 150 parishes have passed to the jurisdiction of the new Church. Then, it will be necessary to redefine the parishes and the distribution of places of worship, as the property of the Church is managed by the State that rents buildings to different denominations. It is unclear what will happen to the holy places, such as the Kyiv Monastery of the Caves, where Onufriy has its seat. Founded in 1051, this monastery houses the relics of seventy-nine saints, as well as the tombs of historical personalities, including the great Prince Yuri Dolgorukiy (1099-1157), considered the founder of the city of Moscow. In the fall of 2018, Filaret took the title of archimandrite of the Monastery of the Caves, thus affirming his claims to this high place of pilgrimage. Finally, it remains to be seen whether the new Church will accept to delegate to the Patriarchate of Constantinople the administration of Ukrainian Orthodox residing in Western countries, as it has been asked to do.

[1] The figures for each of the three churches are quoted from an official Ukrainian source (www.risu.org.ua, as of January 1st, 2018.

Source in French (with picture)