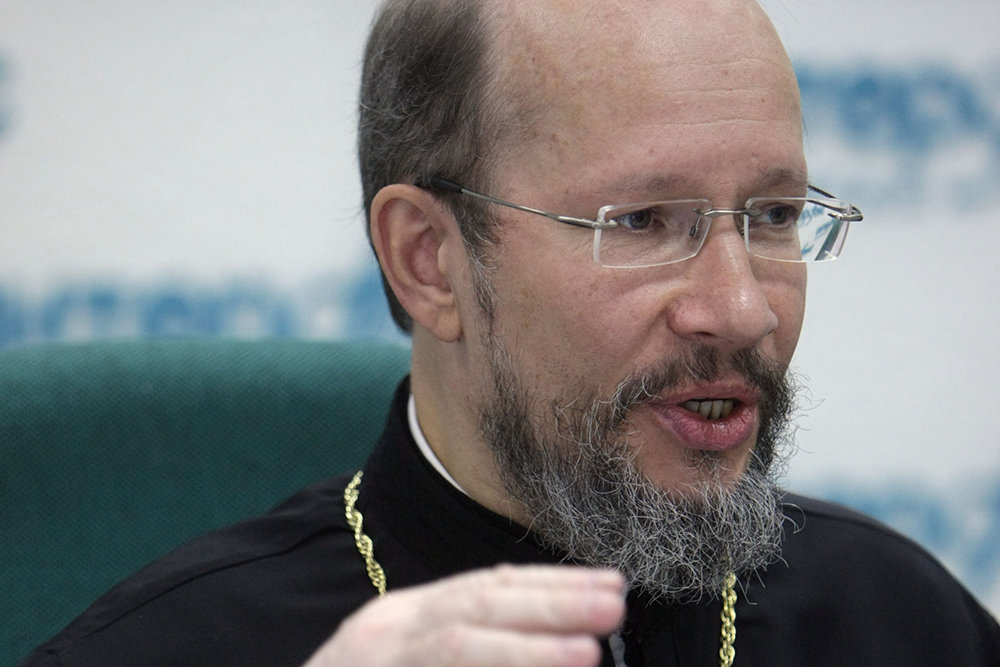 Archpriest Nikolai Balashov, the vice president of the deputy chairman of the Department of External Relations of the Moscow Patriarchate, gave the following interview to the newspaper Rossiyskaya Gazeta:

Rossiyskaya Gazeta:
More often than not, the situation concerning the Kyiv Pechersk, Pochayiv, and Sviatohirsk Lavras is qualified in Ukraine as “fraught with bloodshed” [because of the violence that could occur if they were attributed to autocephalists]. What is the basis of the Ukrainian Orthodox Church of the Moscow Patriarchate’s use of them? What are your predictions?

Archpriest Nikolai Balashov:
According to the decisions of the Cabinet of Ministers of Ukraine in 2003 and 2011, all the buildings of the Pochayiv Lavra and the lower part of Kyiv Pechersk Lavra (75 objects) have been entrusted to the canonical Orthodox Church of Ukraine for a period of 49 years. The transfer of these objects to the canonical Church has been endorsed by documents from different departments, but the main ones are two resolutions of the Cabinet of Ministers of Ukraine. The status of real estate objects is different for both Lavras.

But all this depends mainly on the fact that one or the other of the buildings is a historical and architectural monument.
As for predictions, on the one hand, we are hearing the Ukrainian president assuring us that during the reformatting carried out by Petro Poroshenko (by political and not ecclesial methods), there will be no use of force.
But on the other hand, we are hearing statements made by other officials who deny the Orthodox Church of Ukraine the right to call themselves “Church” in general, and who say there is no room for them in Ukraine. Of course, this can only be a source of deep concern.
At the same time, the leader of the Ukrainian schismatics, the so-called patriarch Filaret Denisenko, has repeatedly stated that after he receives the expected Tomos of the Patriarch of Constantinople, the Kyiv and Pochayiv Lavras will have to be transferred to the new Church. Hoping to preside that new Church, through the recent decision of the synod of the so-called Kyiv Patriarchate, he included in his entire title his so-called archimandrite title of the Kyiv and Pochayiv Lavras. Although everyone knows that none of the great monasteries of Ukraine has followed the schismatics. The schism took place in Ukraine in the 1990s, through the efforts of the politicians and of a number of members of the elite who had left the Church. But neither the Kyiv Lavra nor the Pochayiv Lavra had followed the schismatics then. It is worth mentioning that the overwhelming majority of monks and nuns in Ukraine are members of the canonical Orthodox Church. Twenty (!) times more than those of the two schismatic groups together [number of monks and nuns of the canonical Church: 4,869; in the group following Filaret: 221; in the Makariy group: 12]. Thus, the mention of the Kyiv and Pochayiv Lavras in the title of the pseudo-patriarch is a new declaration of their intention to seize these ancient monasteries in the future.

What about the Sviatohirsk Lavra?

The Sviatohirsk Lavra is a minor subject of claims and disputes, because in the region where it is located, the positions and activity of the so-called Kyiv Patriarchate are extremely unpopular. And he doesn’t have the support of the population. I believe this is the reason why there is no mention of the Sviatohirsk Lavra in the speeches of the leader of schism.

But the American ambassador went there recently…

That’s right. The ambassador was given the opportunity to learn about the Sviatohirsk Lavra’s charitable activity and of its assistance to the displaced people who were forced to leave their homes, because of the battles led by the Ukrainian army.

I believe these are only Mr. Denisenko’s dream [Filaret, ndt], because the assemblies of the clergy currently taking place in the dioceses of the canonical Ukrainian Orthodox Church express their desire to be part of the canonical Church, with an overwhelming majority and as in the past. They support their primate His Beatitude Metropolitan Onufriy of Kyiv and all Ukraine and the path he has chosen. In doing so, they do not wish to enter into canonical relations with the Patriarchate of Constantinople. Nor do they wish to be under the leadership of the “rehabilitated” schismatics, but instead, they want to remain under the Moscow Patriarchate. By force, to compel the faithful to change the name of their religious organization? Obviously, such actions run counter to basic human rights. It is strange that such intentions and claims are combined with statements about the so-called European choice of Ukraine, which the representatives of the current Ukrainian leadership often speak about.

Father Nikolai, many people are worried by this question: how should the faithful of the Russian Orthodox Church on holiday or on pilgrimage in Turkey behave? Can they enter the churches of the Patriarchate of Constantinople? Pray there? Venerate the holy relics? It is understandable that they cannot confess, receive Communion or marry there. Tell us about the proper behavior.

Tourists visit churches and shrines of the most diverse religions. In this respect, I see no obstacle to entering a church of the Patriarchate of Constantinople and worshiping there relics common to all Orthodox. We even venerate relics in heterodox churches, for example in the basilica of Bari and other places. There is no obstacle to praying there either. You can pray wherever you are. The Apostle Paul teaches us to pray without ceasing. But in regard to participation in the sacraments and services, that is another question. The Synod of the Russian Orthodox Church made a decision about this. And I can assure you that the Russian Orthodox Church will undoubtedly do all that is necessary so that our compatriots in Turkey will not be left abandoned and deprived of pastoral care.