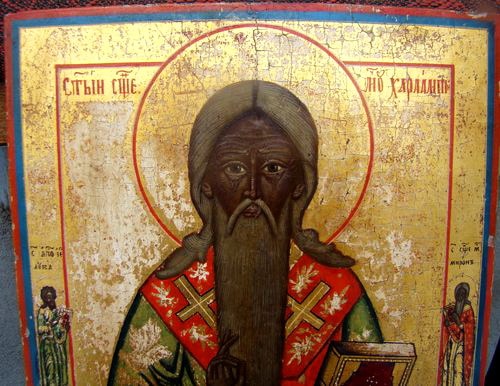 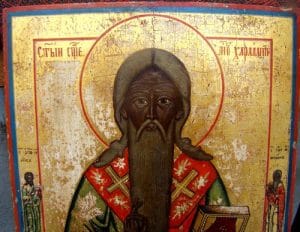 The Hieromartyr Charalampus, Bishop of Magnesia, the Martyrs Porphyrius and Baptus and Three Women Martyrs suffered in the year 202.

Saint Charalampus, Bishop of Magnesia (Asia Minor), successfully spread faith in Christ the Savior, guiding people on the way to salvation. News of his preaching reached Lucian, the governor of the district, and the military commander Lucius. The saint was arrested and brought to trial, where he confessed his faith in Christ and refused to offer sacrifice to idols.

Despite the bishop’s advanced age (he was 113 years old), he was subjected to monstrous tortures. They lacerated his body with iron hooks, and scraped all the skin from his body. During this the saint turned to his tormentors, “I thank you, brethren, that you have restored my spirit, which longs to pass over to a new and everlasting life!”

Seeing the Elder’s endurance and his complete lack of malice, two soldiers (Porphyrius and Baptus) openly confessed Christ, for which they were immediately beheaded with a sword. Three women who were watching the sufferings of Saint Charalampus also began to glorify Christ, and were quickly martyred.

The enraged Lucius seized the instruments of torture and began to torture the holy martyr, but suddenly his forearms were cut off as if by a sword. The governor then spat in the face of the saint, and immediately his head was turned around so that he faced backwards.

Then Lucius entreated the saint to show mercy on him, and both torturers were healed through the prayers of Saint Charalampus. During this a multitude of witnesses came to believe in Christ. Among them also was Lucius, who fell at the feet of the holy bishop, asking to be baptized.

Lucian reported these events to the emperor Septimus Severus (193-211), who was then at Pisidian Antioch (western Asia Minor). The emperor ordered Saint Charalampus to be brought to him in Antioch. Soldiers twisted the saint’s beard into a rope, wound it around his neck, and used it to drag him along. They also drove an iron nail into his body. The emperor then ordered them to torture the bishop more intensely, and they began to burn him with fire, a little at a time. But God protected the saint, and he remained unharmed.

Many miracles were worked through his prayer: he raised a dead youth, and healed a man tormented by devils for thirty-five years, so that many people began to believe in Christ the Savior. Even Galina, the daughter of the emperor, began to believe in Christ, and twice smashed the idols in a pagan temple. On the orders of the emperor they beat the saint about the mouth with stones. They also wanted to set his beard on fire, but the flames burned the torturer.

Full of wickedness, Septimus Severus and an official named Crispus hurled blasphemy at the Lord, mockingly summoning Him to come down to the earth, and boasting of their own power and might. The Lord sent an earthquake, and great fear fell upon all, the impious ones were both suspended in mid-air held by invisible bonds, and only by the prayer of the saint were they put down. The dazed emperor was shaken in his former impiety, but again quickly fell into error and gave orders to torture the saint.

And finally, the emperor sentenced Saint Charalampus to beheading with a sword. During Saint Charalampus’ final prayer, the heavens opened and the saint saw the Savior and a multitude of angels. The holy martyr asked Him to grant that the place where his relics would repose would never suffer famine or disease. He also begged that there would be peace, prosperity, and an abundance of fruit, grain, and wine in that place, and that the souls of these people would be saved. The Lord promised to fulfill his request and ascended to heaven, and the soul of the hieromartyr Charalampus followed after Him. By the mercy of God, the saint died before he could be executed. Galina buried the martyr’s body with great honor.

In Greek hagiography and iconography Saint Charalampus is regarded as a priest, while Russian sources seem to regard him as a bishop.

You became a firm column in the Church of Christ, wise Charalampus; / A lamp of everlasting light to the world: / Well known to the world through your martyrdom, / You dispelled the dark night of idolatry. / Boldly intercede with Christ God that He may save our souls.

You rose from the east like a star, hieromartyr Charalampus, / And enlightened the faithful with the brightness of your miracles. / Therefore we honor your holy contest!

1
But know this, that in the last days perilous times will come:
2
For men will be lovers of themselves, lovers of money, boasters, proud, blasphemers, disobedient to parents, unthankful, unholy,
3
unloving, unforgiving, slanderers, without self-control, brutal, despisers of good,
4
traitors, headstrong, haughty, lovers of pleasure rather than lovers of God,
5
having a form of godliness but denying its power. And from such people turn away!
6
For of this sort are those who creep into households and make captives of gullible women loaded down with sins, led away by various lusts,
7
always learning and never able to come to the knowledge of the truth.
8
Now as Jannes and Jambres resisted Moses, so do these also resist the truth: men of corrupt minds, disapproved concerning the faith;
9
but they will progress no further, for their folly will be manifest to all, as theirs also was.

46
“Beware of the scribes, who desire to go around in long robes, love greetings in the marketplaces, the best seats in the synagogues, and the best places at feasts,
47
who devour widows’ houses, and for a pretense make long prayers. These will receive greater condemnation.”
1
And He looked up and saw the rich putting their gifts into the treasury,
2
and He saw also a certain poor widow putting in two mites.
3
So He said, “Truly I say to you that this poor widow has put in more than all;
4
for all these out of their abundance have put in offerings for God, but she out of her poverty put in all the livelihood that she had.”