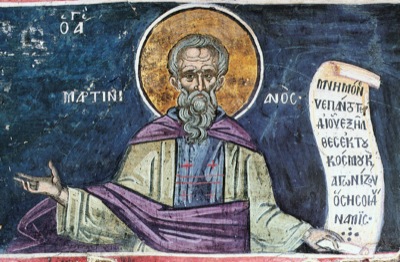 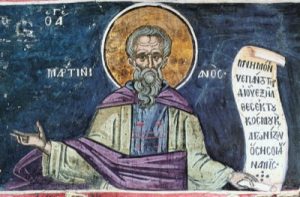 Saint Martinian went to live in the wilderness at the age of eighteen, not far from the city of Caesarea in Palestine. For twenty-five years, he devoted himself to ascetic deeds and silence, and he was granted the gift of healing illnesses and casting out demons. However, the Enemy of the race of man would not stop bothering the hermit with various temptations.

Once a profligate woman made a wager with some dissolute people that she could seduce Saint Martinian, the fame of whose virtuous life had spread throughout all the city. She came to him one night pretending that she had lost her way in the storm, and asking for shelter. The saint let her enter, unable to turn her away in such a storm. He went into his room and locked the door. The wicked guest changed into beautiful clothes and began to tempt the ascetic.

When morning came, Saint Martinian came out to send the woman away. Though he was tempted by the woman’s beauty, he was determined not to fall into sin. Lighting a fire, he stepped into it, saying, “You want me to burn with temptation, and want to lead me into the fires of Hell. I will not let you. Instead, I will burn for my virginity and save my soul.”

The woman came to see how evil she was. She repented and asked the saint to guide her onto the way of salvation. He told her to go to Bethlehem, to Saint Paula (January 26). There she lived as a nun for twelve years in strict asceticism until her blessed end. The woman’s name was Zoe.

Saint Martinian went to an uninhabited rocky island, and lived on it under the open sky for several years, nourished by the provisions brought by a certain sailor from time to time. In return the monk wove baskets for him.

Once a powerful storm wrecked a ship, and a woman named Photina floated on pieces of the wreckage to the island of Saint Martinian. Saint Martinian helped her to survive the island. “Remain here,” he told her, “for here is bread and water, and in two months a boat will come.”

Then he jumped into the sea and swam off. Two dolphins carried him to dry land. Thereafter, Saint Martinian led the life of a wanderer. Later, he came to Athens and fell ill. Sensing the approach of death, he went into church and lay upon the floor. God revealed to the Bishop of Athens who Saint Martinian was, and the bishop buried his body with honor. This occurred around the year 422.

You quenched the flames of passion, blessed Martinian, with abundant tears; / you calmed the waves of the sea and checked the assaults of wild beasts, saying: / “Almighty God, You are most glorious, for You have saved me from the fire and storm!”

Let us worthily praise with hymns the ever-venerable Martinian, / the tried ascetic who struggled for piety, / an honorable athlete by deliberate choice, / and a resolute citizen and inhabitant of the desert; / for he has trampled down the serpent.

1
Therefore, since Christ suffered for us in the flesh, arm yourselves also with the same mind, for he who has suffered in the flesh has ceased from sin,
2
that he no longer should live the rest of his time in the flesh for the lusts of men, but for the will of God.
3
For we have spent enough of our past lifetime in doing the will of the Gentiles – when we walked in lewdness, lusts, drunkenness, revelries, drinking parties, and abominable idolatries.
4
In regard to these, they think it strange that you do not run with them in the same flood of dissipation, speaking evil of you.
5
They will give an account to Him who is ready to judge the living and the dead.
6
For this reason the gospel was preached also to those who are dead, that they might be judged according to men in the flesh, but live according to God in the spirit.
7
But the end of all things is at hand; therefore be serious and watchful in your prayers.
8
And above all things have fervent love for one another, for “love will cover a multitude of sins.”
9
Be hospitable to one another without grumbling.
10
As each one has received a gift, minister it to one another, as good stewards of the manifold grace of God.
11
If anyone speaks, let him speak as the oracles of God. If anyone ministers, let him do it as with the ability which God supplies, that in all things God may be glorified through Jesus Christ, to whom belong the glory and the dominion forever and ever. Amen.

28
Then one of the scribes came, and having heard them reasoning together, perceiving that He had answered them well, asked Him, “Which is the first commandment of all?”
29
Jesus answered him, “The first of all the commandments is: ‘Hear, O Israel, the LORD our God, the LORD is one.
30
And you shall love the LORD your God with all your heart, with all your soul, with all your mind, and with all your strength.’ This is the first commandment.
31
And the second, like it, is this: ‘You shall love your neighbor as yourself.’ There is no other commandment greater than these.”
32
So the scribe said to Him, “Well said, Teacher. You have spoken the truth, for there is one God, and there is no other but He.
33
And to love Him with all the heart, with all the understanding, with all the soul, and with all the strength, and to love one’s neighbor as oneself, is more than all the whole burnt offerings and sacrifices.”
34
Now when Jesus saw that he answered wisely, He said to him, “You are not far from the kingdom of God.” But after that no one dared question Him.
35
Then Jesus answered and said, while He taught in the temple, “How is it that the scribes say that the Christ is the Son of David?
36
For David himself said by the Holy Spirit: ‘The LORD said to my Lord, sit at My right hand, till I make Your enemies Your footstool.’
37
Therefore David himself calls Him ‘Lord’; how is He then his Son?” And the common people heard Him gladly.