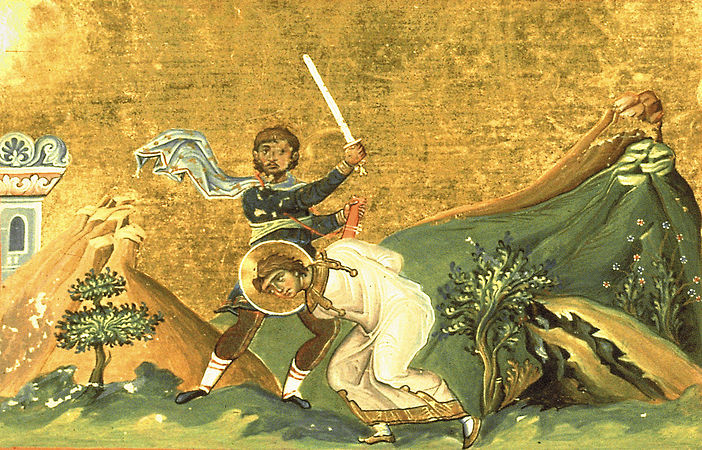 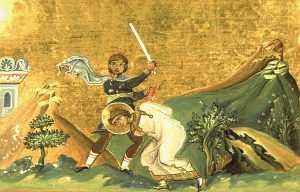 The Martyr Tryphon was born in Phrygia, one of the districts of Asia Minor, in the village of Lampsacus. From his early years the Lord granted him the power to cast out demons and to heal various maladies. He once saved the inhabitants of his native city from starvation. Saint Tryphon, by the power of his prayer, turned back a plague of locusts that were devouring the grain and devastating the fields.

Saint Tryphon gained particular fame by casting out an evil spirit from the daughter of the Roman emperor Gordian (238-244). Helping everyone in distress, he asked only one thing from them: faith in Jesus Christ, by Whose grace he healed them.

When the emperor Decius (249-251) assumed the imperial throne, he began a fierce persecution of Christians. Someone reported to the commander Aquilinus that Saint Tryphon was boldly preaching faith in Christ, and that he led many to Baptism. The saint was arrested and subjected to interrogation, during which he fearlessly confessed his faith.

He was subjected to harsh tortures: they beat him with clubs, raked his body with iron hooks, they scorched his flesh with fire, and led him through the city, after iron nails were hammered into his feet. Saint Tryphon bravely endured all the torments without complaint.

Finally, he was condemned to beheading with a sword. The holy martyr prayed before his execution, thanking God for strengthening him in his sufferings. He also asked the Lord to bless those who should call upon his name for help. Just as the soldiers raised the sword over the head of the holy martyr, he surrendered his soul into the hands of God. This event occurred in the city of Nicea in the year 250.

Christians wrapped the holy body of the martyr in a clean shroud and wanted to bury him in the city of Nicea, where he suffered, but Saint Tryphon in a vision commanded them to take his body to his native land to the village of Lampsada. Later on, the relics of Saint Tryphon were transferred to Constantinople, and then to Rome.

In Russia, Saint Tryphon is regarded as the patron saint of birds. There is a story that when Tsar Ivan the Terrible was out hunting, his falconer carelessly allowed the Tsar’s favorite falcon to fly away. The Tsar ordered the falconer Tryphon Patrikeiev to find the bird within three days, or else he would be put to death. Tryphon searched all through the forest, but without luck.

On the third day, exhausted by long searching, he returned to Moscow to the place called Marinaya Grove. Overcome with weariness, he lay down to rest, fervently praying to his patron saint, the Martyr Tryphon, for help.

In a dream he saw a youth on a white horse, holding the Tsar’s falcon on his hand. The youth said, “Take the lost bird, go to the Tsar and do not grieve.” When he awakened, the falconer actually spotted the falcon on a pine tree. He took it to the Tsar and told him about the miraculous help he received from the holy Martyr Tryphon. Grateful to Saint Tryphon for saving his life, Tryphon Patrikeiev built a chapel on the spot where the saint appeared. Later on, he also built a church dedicated to the holy Martyr Tryphon in Moscow.

The holy martyr is greatly venerated in the Russian Orthodox Church as the heavenly protector of Moscow. Many Russian icons depict the saint holding a falcon on his arm.

Troparion of the Forefeast, tone 1

The celestial choir of heavenly angels / bends down to the earth / and sees the First-born of all creation / being carried into the Temple as a babe / by a Mother who has not known man, / and in amazement sings with us / a pre-festal hymn.

Your holy martyr Tryphon, O Lord, / through his suffering has received an incorruptible crown from You, our God. / For having Your strength, he laid low his adversaries, / and shattered the powerless boldness of demons. / Through his intercessions, save our souls!

By the power of the Trinity you destroyed polytheism to the ends of the earth, / and you were honored by Christ, all-glorious Tryphon; / having conquered tyrants through Christ the Savior, / you received your crown of martyrdom and the gift of divine healing, for you are invincible.

Kontakion of the Forefeast, tone 6

The Word, unseen with the Father, / now is seen in the flesh, ineffably born of the Virgin, / and is given into the arms of the priest and Elder. / Let us worship Him, our True God.