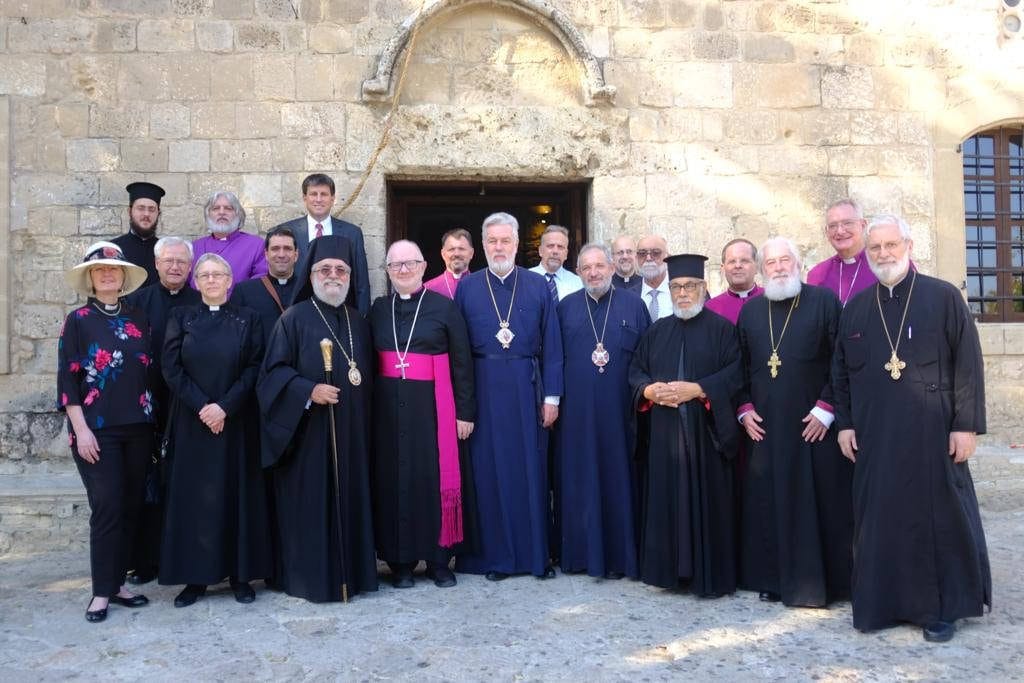 In the name of the Triune God, and with the blessing and guidance of our Churches, the International Commission for Anglican–Orthodox Theological Dialogue met in Larnaca, Cyprus from 13 to 20 October 2018 to continue consideration of ecology and end of life issues. The meeting was hosted by His Eminence Metropolitan Chrysostomos of Kition on behalf of the Church of Cyprus. The Commission is deeply grateful for His Eminence’s generous and warm hospitality.

As always the work of the Commission was undergirded by daily prayer and worship. The Commission attended the Sunday Eucharist at the Anglican Cathedral of St Paul, Nicosia, a celebration of the Divine Liturgy at the Cathedral Church of St Lazarus, Larnaca and Great Vespers of the Feast of St Luke, in the Church of St Luke, Patron Saint of Aradippou.

The Commission was blessed by visits to holy sites and relics, including the Church of Angeloktisti, Kiti, Larnaca, and the Byzantine Museum Archbishop Makarios III, Nicosia, and the Church of the Holy Cross in Pano Lefkara.

The Commission continued to develop its work on the theological understanding of the human person, according to principles in its agreed statement In the Image and Likeness of God: A Hope–Filled Anthropology
(Buffalo 2015). The focus this year was to further its work on the practical implications of the Buffalo Agreed Statement, for the complex and pressing issues surrounding the environment and ecology as well as the end of human life.

As agreed in Malta in 2017, first drafts of two agreed statements that addressed these issues were prepared by two members and reviewed by a small drafting group that met at the theological school on the holy island of Halki, Turkey, in June 2018. The revised draft on the environment, Stewards of Creation: A Hope-filled Ecology, was discussed in plenary sessions where further critical reflections ensued in a constructive manner. The Commission was gratified to find substantial convergence in our views on care for creation as well as opportunities for joint action. Preliminary consideration was given to the draft statement on the end of human life, Euthanasia: the Christian approach to Life and Death.

The Commission was saddened to hear of the ongoing pain and suffering caused by the occupation of the north of Cyprus and prayed for a speedy, just and peaceful resolution to this situation. Commission members also prayed for the health of His Beatitude Archbishop Chrysostomos of Cyprus who was hospitalized for medical treatment during the week of the meeting.

The members of the Commission were met with kindness by local Christians, according to traditional hospitality. Members visited the Aradippou Town Hall and Folk Museum followed by a dinner hosted by the Mayor. The Commission joined in a cultural festival in Aradippou following the Great Vespers of St Luke, and visited the village of Pano Lefkara. His Eminence Metropolitan Chrysostomos of Kition, hosted a dinner at St George’s Cultural Centre.

The work of the Commission will continue at its next meeting in October 2019, hosted by the Anglican Communion in Canterbury.

The Most Revd Dr Richard Clarke of Armagh

His Eminence Metropolitan Athenagoras of Belgium

Representatives of the Orthodox Church

His Eminence Metropolitan Serafim of Zimbabwe

The Revd Fr Jonathan A. Hemmings

His Eminence Metropolitan Nifon of Târgovişte

His Eminence Metropolitan Chrysostomos of Kition

The Revd Dr Christos B Christakis

His Grace Bishop Ilia of Philomelion

Representatives of the Anglican Communion

The Most Revd Dr Phillip Aspinall

The Anglican Church of Australia

The Episcopal Anglican Church of Brazil

The Church of England

The Church of England

The Church in Wales

The Anglican Church of Canada

The Episcopal Church in Jerusalem & the Middle East

The Episcopal Church in Jerusalem & the Middle East

The Anglican Church of Southern Africa