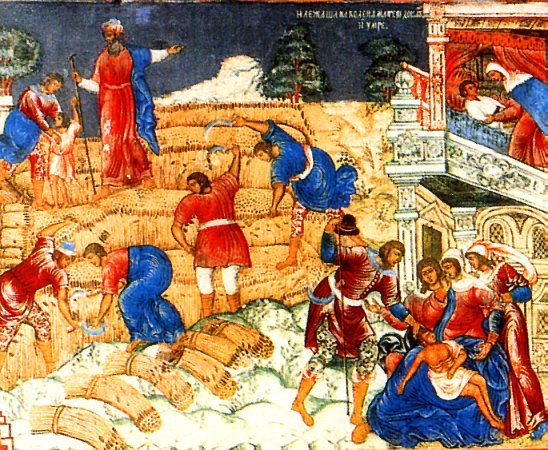 The Holy Prophet Elisha lived in the ninth century before the Birth of Christ, and was a native of the village of Abelmaum, near Jordan. By the command of the Lord he was called to prophetic service by the holy Prophet Elias (July 20).

When it became time for the Prophet Elias to be taken up to Heaven, he said to Elisha, “Ask what shall I do for you, before I am taken from you.” Elisha boldly asked for a double portion of the grace of God: “Let there be a double portion of your spirit upon me.” The Prophet Elias said, “You have asked a hard thing; if you see me when I am taken from you, then so shall it be for you; but if you don’t see me, it wilt not be” (4 [2] Kings 2: 12). As they went along the way talking, there appeared a fiery chariot and horses and separated them both. Elisha cried out, “My father, my father, the chariot of Israel and its horsemen!” (4 Kings 2: 12). Picking up the mantle of his teacher which fell from the sky, Elisha received the power and prophetic gift of Elias. He spent more than 65 years in prophetic service, under six Israelite kings (from Ahab to Joash). While Elisha lived, he did not tremble before any prince, and no word could overcome him (Sirach 48: 13 [“Sirach” is called “Ecclesiasticus” in Catholic Bibles ]).

The holy prophet worked numerous miracles. He divided the waters of the Jordan, having struck it with the mantle of the Prophet Elias; he made the waters of a Jericho spring fit for drinking; he saved the armies of the kings of Israel and Judah that stood in an arid wilderness by bringing forth abundant water by his prayer; he delivered a poor widow from death by starvation through a miraculous increase of oil in a vessel. The Shunamite woman showing hospitality to the prophet was gladdened by the birth of a son through his prayer, and when the child died, he was raised back to life by the prophet. The Syrian military-commander Namaan was healed from leprosy but the prophet’s servant Gehazi was afflicted since he disobeyed the prophet and took money from Namaan on the sly.

Elisha predicted to the Israelite king Joash the victory over his enemies, and by the power of his prayer he worked many other miracles (4 Kings 3-13). The holy Prophet Elisha died in old age at Samaria. “In his life he worked miracles, and at death his works were marvellous” (Sir. 48: 15). A year after his death, a corpse was thrown into the prophet’s grave. As soon as the dead man touched Elisha’s bones, he came to life and stood up (4 Kings 13: 20-21). The Prophet Elisha and his teacher, the Prophet Elias, left no books behind them, since their prophetic preaching was oral. Jesus, son of Sirach, praised both great prophets (Sir. 48:1-15).

John of Damascus composed a canon in honor of the Prophet Elisha, and at Constantinople a church was built in his honor.

Julian the Apostate (361-363) gave orders to burn the relics of the Prophet Elisha, Abdia (Obadiah) and John the Forerunner, but the holy relics were preserved by believers, and part of them were transferred to Alexandria.

In the twentieth century, the humble priest Nicholas Planas had a great veneration for the Prophet Elisha, and was accounted worthy to see him in visions.

An angel in the flesh and the cornerstone of the prophets, / the second forerunner of the coming of Christ, / Glorious Elijah sent grace from on high to Elisha, / to dispel diseases and to cleanse lepers. / Therefore, he pours forth healings on those who honor him.

You were revealed as a Prophet of God, / when you received from Elijah a double portion of the grace which you deserved; / you were his contemporary, blessed Elisha, / and together with him you unceasingly pray to Christ God for us all!

10
For if when we were enemies we were reconciled to God through the death of His Son, much more, having been reconciled, we shall be saved by His life.
11
And not only that, but we also rejoice in God through our Lord Jesus Christ, through whom we have now received the reconciliation.
12
Therefore, just as through one man sin entered the world, and death through sin, and thus death spread to all men, because all sinned –
13
(For until the law sin was in the world, but sin is not imputed when there is no law.
14
Nevertheless death reigned from Adam to Moses, even over those who had not sinned according to the likeness of the transgression of Adam, who is a type of Him who was to come.
15
But the free gift is not like the offense. For if by the one man’s offense many died, much more the grace of God and the gift by the grace of the one Man, Jesus Christ, abounded to many.
16
And the gift is not like that which came through the one who sinned. For the judgment which came from one offense resulted in condemnation, but the free gift which came from many offenses resulted in justification.

23
Now when He got into a boat, His disciples followed Him.
24
And suddenly a great tempest arose on the sea, so that the boat was covered with the waves. But He was asleep.
25
Then His disciples came to Him and awoke Him, saying, “Lord, save us! We are perishing!”
26
But He said to them, “Why are you fearful, O you of little faith?” Then He arose and rebuked the winds and the sea, and there was a great calm.
27
So the men marveled, saying, “Who can this be, that even the winds and the sea obey Him?”