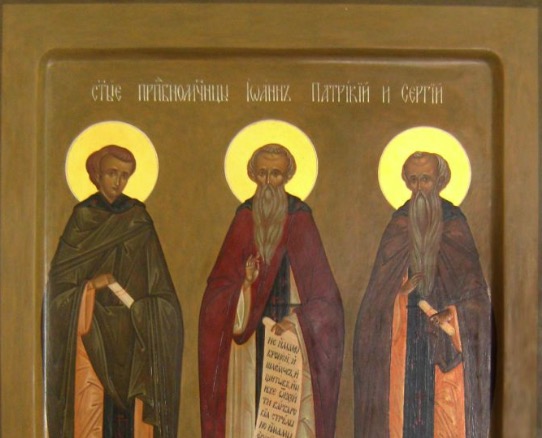 The Holy Martyrs at the Monastery of St. Sabbas 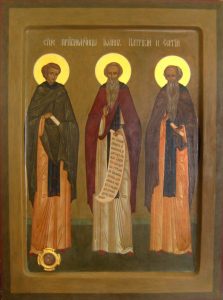 Saints John, Sergius, Patrick and others were slain in the Monastery of Saint Sabbas. During the eighth century the area around Jerusalem was subjected to frequent incursions of the Saracens. The monastery of Saint Chariton was devastated and fell into ruin. Twice the Saracens tried to plunder the Lavra of Saint Sava the Sanctified, but God’s Providence protected the monastery. The monks would have been able to escape the barbarians by going to Jerusalem, but they decided not to forsake the place where they had sought salvation for so many years.

Thirteen men were killed and many wounded, and monastery cells were set afire. The Saracens intended also to torch the monastery church, but seeing a throng of people in the distance, they mistook this for an army sent from Jerusalem. The Saracens managed to get away, carrying off the little they were able to plunder. After the enemy fled, Father Thomas, an experienced physician, began to help those who remained alive.

On Great Thursday, March 20, the Saracens again descended upon the Lavra with a larger force and began to beat up the monks. The survivors were driven into the church, where they were tortured in order to force them to reveal where any treasure might be hidden. The monastery was surrounded, so no one could save himself by fleeing. The barbarians seized Saint John, a young monk, who had cared for vagrants. They beat him fiercely, then they cut the sinews of his hands and feet and dragged him over stones by his feet, which tore the skin from the martyr’s back.

The keeper of the church vessels, Saint Sergius, hid the church vessels and attempted to flee, but he was captured and beheaded. Several of the monks nevertheless managed to hide themselves outside the monastery in a cave, but they were spotted by a sentry on a hill, and they ordered everyone to come out. Inside the cave Saint Patrick whispered to the brethren huddled with him, “Fear not, I will go alone and meet my death. Meanwhile, sit and pray.”

The Saracens asked whether there was anyone else in the cave, and Patrick said that he was alone. They led him to the Lavra, where the captives awaited their fate. The Saracens demanded of them a ransom of 4,000 gold pieces and the sacred vessels. The monks were not able to give such a ransom. Then they led them into the cave of Saint Sava inside the monastery walls. They lit a fire on which they piled up dung in front of the entrance to the cave, hoping to suffocate the monks with the poisonous fumes. Eighteen men perished in the cave, among whom were Saints John and Patrick. The Saracens continued to torture those who were still alive, but got nothing out of them. Finally, they left the monastery.

Later, on the night of Great Friday, the monks hidden in the hills returned to the Lavra, they took up the bodies of the murdered Fathers to the church and buried them there.

The barbarians who plundered the monastery were punished by God. They were stricken with a sudden illness, and they all perished. Their bodies were devoured by wild beasts.

The martyrs of Saint Sava’s Lavra commemorated on May 16 suffered in the seventh century, during the reign of Heraclius (610-641).

As chosen and holy lambs of the Savior, / you were gathered together in wise Sabbas’ flock from many lands. / You were put to death by the cruelty of the barbarians / and you departed joyfully to the heavenly fold. / As righteous athletes you now pray for our souls.

You openly disdained the pleasure of earthly and corruptible things, / choosing instead a life in the desert. / You despised the beautiful things of this world / together with the food that passes away. / Therefore, all-blessed ones, you were counted worthy of the Kingdom of heaven, / where you rejoice with the choirs of martyrs and ascetics. / As we honor your memory, / we earnestly cry out to you: / deliver us, O Fathers, from tribulations!

1
O Lord, You are my God. I will exalt You, I will praise Your name, for You have done wonderful things; Your counsels of old are faithfulness and truth.
2
For You have made a city a ruin, a fortified city a ruin, a palace of foreigners to be a city no more; it will never be rebuilt.
3
Therefore the strong people will glorify You; the city of the terrible nations will fear You.
4
For You have been a strength to the poor, a strength to the needy in his distress, a refuge from the storm, a shade from the heat; for the blast of the terrible ones is as a storm against the wall.
5
You will reduce the noise of aliens, as heat in a dry place; as heat in the shadow of a cloud, the song of the terrible ones will be diminished.
6
And in this mountain the Lord of hosts will make for all people a feast of choice pieces, a feast of wines on the lees, of fat things full of marrow, of well-refined wines on the lees.
7
And He will destroy on this mountain the surface of the covering cast over all people, and the veil that is spread over all nations.
8
He will swallow up death forever, and the Lord God will wipe away tears from all faces; the rebuke of His people He will take away from all the earth; for the Lord has spoken.
9
And it will be said in that day: “Behold, this is our God; we have waited for Him, and He will save us. This is the Lord; we have waited for Him; we will be glad and rejoice in His salvation.”

8
A man will be commended according to his wisdom, but he who is of a perverse heart will be despised.
9
Better is the one who is slighted but has a servant, than he who honors himself but lacks bread.
10
A righteous man regards the life of his animal, but the tender mercies of the wicked are cruel.
11
He who tills his land will be satisfied with bread, but he who follows frivolity is devoid of understanding.
12
The wicked covet the catch of evil men, but the root of the righteous yields fruit.
13
The wicked is ensnared by the transgression of his lips, but the righteous will come through trouble.
14
A man will be satisfied with good by the fruit of his mouth, and the recompense of a man’s hands will be rendered to him.
15
The way of a fool is right in his own eyes, but he who heeds counsel is wise.
16
A fool’s wrath is known at once, but a prudent man covers shame.
17
He who speaks truth declares righteousness, but a false witness, deceit.
18
There is one who speaks like the piercings of a sword, but the tongue of the wise promotes health.
19
The truthful lip shall be established forever, but a lying tongue is but for a moment.
20
Deceit is in the heart of those who devise evil, but counselors of peace have joy.
21
No grave trouble will overtake the righteous, but the wicked shall be filled with evil.
22
Lying lips are an abomination to the Lord, but those who deal truthfully are His delight.