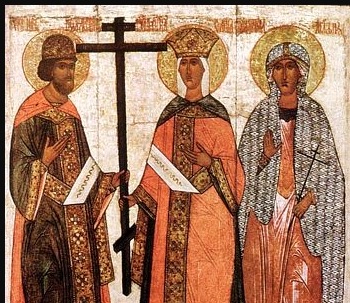 Appearance of the Sign of the Precious Cross over Jerusalem 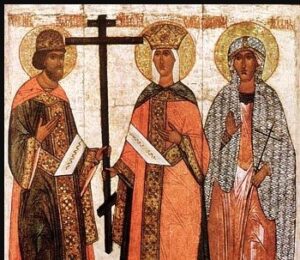 The Precious Cross appeared in the sky over Jerusalem on the morning of May 7, 351 during the reign of the emperor Constantius, the son of Saint Constantine (May 21).

At that time the heresy of Arianism, which taught that Christ was merely a creature and not God, was causing great turmoil and division throughout the Empire. Even after the First Ecumenical Council at Nicea in 325, many people were drawn to this false teaching, and the Orthodox found themselves in the minority in many places.

Constantius, the ruler of the eastern part of the Empire, was a fervent supporter of Arianism. His brothers Constantine II and Constans, who were pious Orthodox Christians, ruled in the west. They were both killed in separate battles around 350, leaving Constantius as sole ruler. Also in 350, Saint Cyril (March 18) became Patriarch of Jerusalem and began his zealous struggle against Arianism.

In May of 351 a luminous Cross appeared over Jerusalem, stretching from Golgotha to the Mount of Olives, a distance of about five and a half miles. The Cross was wide as it was long, and shone more brightly than the sun. Many people left their homes and workplaces to gather in the church and glorify Christ. The historian Sozomen says that this wondrous sign led to the conversion of multitudes of pagans and Jews to Christianity.

A letter from Saint Cyril to the emperor describing this phenomenon, and admonishing him to become Orthodox, has been preserved. The apparition of the Cross remained over the city for a whole week.

The vision of the Cross over Jerusalem strengthened the Orthodox faithful and contributed to the return of many Arians to the Church. It is also a reminder of the awesome Second Coming of Christ, when “the sign of the Son of man shall appear in heaven (Matthew 24:30).

The image of Your cross has shown more brightly than the sun, / extending from the holy mountain to the place of the skull. / In it, You have shown Your strength, O Savior, / and confirmed all Orthodox Christians in the True Faith. / Through the prayers of the Theotokos, / save us, O Christ our God.

The pure and Life-giving Cross which opened paradise / appeared in splendor above the earth, / extending its brilliant rays to the heavens. / Today we faithful accept its radiance as our guide to the eternal light. / We bear it in our struggles as an assurance of victory and triumph!

1
There was a certain man in Caesarea called Cornelius, a centurion of what was called the Italian Regiment,
2
a devout man and one who feared God with all his household, who gave alms generously to the people, and prayed to God always.
3
About the ninth hour of the day he saw clearly in a vision an angel of God coming in and saying to him, “Cornelius!”
4
And when he observed him, he was afraid, and said, “What is it, lord?” So he said to him, “Your prayers and your alms have come up for a memorial before God.
5
Now send men to Joppa, and send for Simon whose surname is Peter.
6
He is lodging with Simon, a tanner, whose house is by the sea. He will tell you what you must do.”
7
And when the angel who spoke to him had departed, Cornelius called two of his household servants and a devout soldier from among those who waited on him continually.
8
So when he had explained all these things to them, he sent them to Joppa.
9
The next day, as they went on their journey and drew near the city, Peter went up on the housetop to pray, about the sixth hour.
10
Then he became very hungry and wanted to eat; but while they made ready, he fell into a trance
11
and saw heaven opened and an object like a great sheet bound at the four corners, descending to him and let down to the earth.
12
In it were all kinds of four-footed animals of the earth, wild beasts, creeping things, and birds of the air.
13
And a voice came to him, “Rise, Peter; kill and eat.”
14
But Peter said, “Not so, Lord! For I have never eaten anything common or unclean.”
15
And a voice spoke to him again the second time, “What God has cleansed you must not call common.”
16
This was done three times. And the object was taken up into heaven again.

56
He who eats My flesh and drinks My blood abides in Me, and I in him.
57
As the living Father sent Me, and I live because of the Father, so he who feeds on Me will live because of Me.
58
This is the bread which came down from heaven – not as your fathers ate the manna, and are dead. He who eats this bread will live forever.”
59
These things He said in the synagogue as He taught in Capernaum.
60
Therefore many of His disciples, when they heard this, said, “This is a hard saying; who can understand it?”
61
When Jesus knew in Himself that His disciples complained about this, He said to them, “Does this offend you?
62
What then if you should see the Son of Man ascend where He was before?
63
It is the Spirit who gives life; the flesh profits nothing. The words that I speak to you are spirit, and they are life.
64
But there are some of you who do not believe.” For Jesus knew from the beginning who they were who did not believe, and who would betray Him.
65
And He said, “Therefore I have said to you that no one can come to Me unless it has been granted to him by My Father.”
66
From that time many of His disciples went back and walked with Him no more.
67
Then Jesus said to the twelve, “Do you also want to go away?”
68
But Simon Peter answered Him, “Lord, to whom shall we go? You have the words of eternal life.
69
Also we have come to believe and know that You are the Christ, the Son of the living God.”