Heads and representatives of Local Orthodox Churches are to meet next week in Amman on the initiative of Patriarch Theophilos of Jerusalem. In an exclusive interview to RIA Novosti, Metropolitan Hilarion of Volokolamsk, head of the Moscow Patriarchate department for external church relations, tells who will discuss what and when and what will be the aims of the delegation of the Russian Orthodox Church to be led by Patriarch Kirill of Moscow and All Russia. 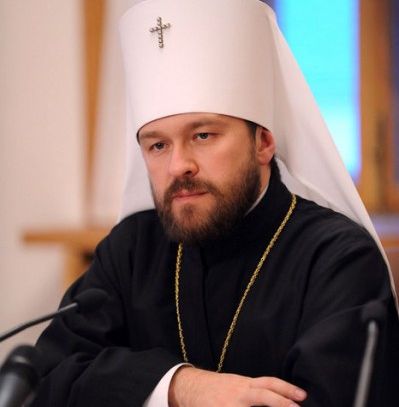 – Your Eminence, when exactly will the pan-Orthodox conference take place in Amman and how is it to be called correctly?

– According to the letter from Patriarch Theophilos of Jerusalem, the main event will take place on February 26. The delegations are expected to arrive on February 25 and leave on February 27. It is more correct to refer to it not as a pan-Orthodox conference, but rather a fraternal meeting of Primates and representatives of Local Churches.

–  What are the aims of this meeting, with what tasks and hopes will Patriarch Kirill go there?

– The aim of this gathering as outlined by Patriarch Theophilos is to discuss the preservation of church unity. Regrettably, as of today, there is the fact of existing divisions and serious disagreements among the Local Churches. There is a danger of a deep schism in the Orthodox Church. These divisions can be overcome only through an honest and fraternal dialogue and joint efforts of all the universally recognized autocephalous Churches. We hope that the forthcoming meeting will become an important stage in this direction.

–  Which Churches have already agreed to attend this meeting and which have refused to attend and why?

– The Russian Church is not the initiator nor the organizer of this event and therefore it has no exact information about the number and composition of its participants.

As far as we can judge from the information available to us, it is expected that the meeting will be attended by several autocephalous Churches. Meanwhile, a refusal to attend was publicly stated, along with Patriarch Bartholomew, by the Primates of the Churches of Greece, Cyprus and Albania, who maintain the Patriarch of Constantinople alone can convene such events.

–  Will Metropolitan Onufriy, the Primate of the canonical Ukrainian Orthodox Church, go to Amman?

– The composition of our delegation will be announced later.

– What do you know about the interference of some politicians who dissuaded primates from attending the meeting? What is the role of the USA in this story?

–   The political interference in the process of creating the so-called “Orthodox Church of Ukraine” was obvious from the very beginning. We are fully aware that the ensuing recognition of the schismatics by the Churches of Greece and Alexandria happened not without participation of external forces.

We know that pressure was also made on some Primates concerning the issue of the meeting in Amman. Anyway, it is difficult to interpret in any other way the refusal of the Archbishop of Athens to attend this meeting, which he announced to journalists immediately after the meeting with the American ambassador. I will remind you that he also announced the recognition of the “OCU” after repeated meeting with the same diplomat.

– Are common celebrations and meetings with state officials planned in Amman?

–  As it follows from the invitation letters of His Beatitude Patriarch Theophilos of Jerusalem, they do not plan common divine services in Amman.

It is expected that the participants will meet with King Abdullah ibn-Hussein of Jordan.

–  Are more such meetings possible and how often and where?

– We hope that the meeting in Amman will make the beginning of other similar meetings that our Orthodox family needs so much now.