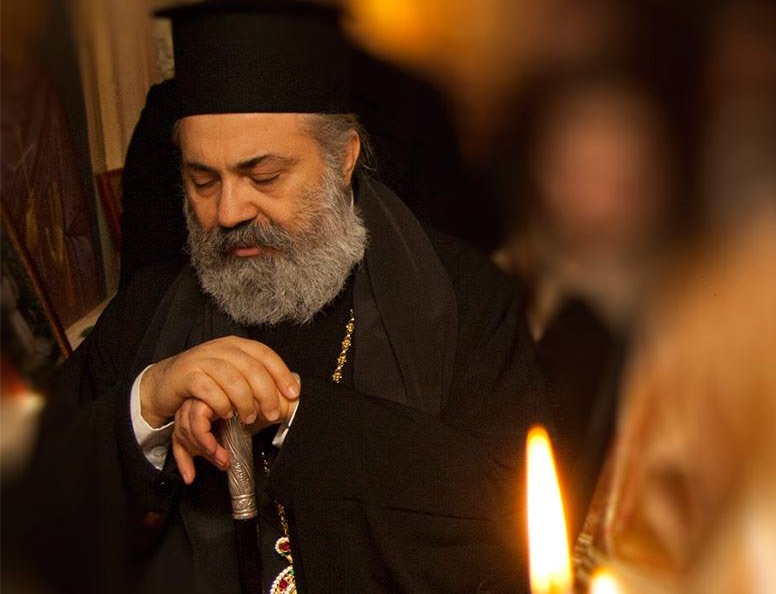 April 22 marked the 6th anniversary of the abduction of Metropolitan Paul of Aleppo and the Jacobite Syrian Metropolitan Johanna Ibrahim. On this occasion, Metropolitan Silouan of Byblos (Patriarchate of Antioch) sent us a text which you can read below in its English translation:

“Metropolitan Paul (of Aleppo) in an ecclesiastical mission” is an expression that came to me in the first days after Monday April 22, 2013 (the day he was kidnapped). This expression opened a window through which I have tried to explore the mystery of that great day, a day of God’s work in the history of humanity.

Arriving on the threshold of the seventh year of this invisible “ecclesiastical mission”, we notice that infertility and desiccation encircle us. The infertility of hope and the desiccation of inspiration. So you believe that time removes hope from you, and that you have no inspiration to defend the work of God between us and in us. How then is it possible to defend your hope and your faith, and what can you talk about in this case? An answer comes to you: “Silence”! But how could you defend your hope and your faith in this “ecclesiastical mission” with silence?

In seeking the satisfactory answer to this question, you rejoice that the Bible reveals to you the work of God the Creator, when at the end of the six-day work of creation, it tells us with majesty and modesty, that “on the seventh day God finished the works He made, and He rested on the seventh day from all the works He made ” (Genesis 2:2). This fact makes you plunge into the work of God the Creator, as we are on the threshold of the seventh year of this great day. With reverence and insight, we contemplate the mystery of the work of God even in us — since He said, “My Father has been working until now, and I have been working” (John 5:17). And we contemplate how this work has manifested itself in a paradoxical way: both in expression and in the absence of expression. Both in revelation and in the absence of revelation. It is the secret of the “silence” that appeared on the seventh day, when God the Creator rested from all His works. A silence that the writer could not express –how could he have? Indeed, the phrase “God saw that it was good” (Genesis 1:4; 10; 12; 18; 21; 25) was keeping us company during the first days of creation, and even the phrase “that was very good “(Genesis 1:31) was there to conclude these days. However, the sacred” silence” of God is present on the seventh day as a blessed seal affixed to His words of the previous days.

This biblical reality brings you to the dynamics of the Bible, where the “silence” of God confronts all who walk in the meanders of life, to water them with the water of hope. An excessive hope. Our difficulty lies in our lack of tolerance for this silence, especially if this silence is prolonged in our eyes, and if we are not sufficiently imbued with the Holy Spirit. God be praised that His silence is not sterile. Likewise for whoever is filled with the Spirit, their silence is not sterile either. It is clear that the source of this silence is one. The Sacred Scripture spoke to us about it at the beginning of creation, when It revealed to us the presence of the “master of silence”, if I may use this expression to refer to the Holy Spirit: “In the beginning God made heaven and earth. The earth was invisible and unfinished; and darkness was over the deep. The Spirit of God was hovering over the face of the water” (Genesis 1:1-2). And we realized He is also the “master of eloquence”: He is the one who inspires and gives us a voice, as the Lord explained to us in circumstances similar to those we are talking about: “When they arrest you and deliver you up, do not worry beforehand, or premeditate what you will speak. But whatever is given you in that hour, speak that; for it is not you who speak, but the Holy Spirit” (Mark 13:11).

In fact, on the threshold of this “seventh day”, or rather of the seventh year, you must stand with veneration before the work of God the Creator during these past six years, and watch the manifestation of His work, as the Lord rests from all His works in a remarkable silence that cannot be deciphered by any word from us, but rather by a silence that speaks in the hearts of those who accept the “Master of eloquence and silence” in them. By an act of prayer, of faith or service. In a situation of life or death. In a state of suffering or liberation. In desperate waiting or in a request quickly granted. In an absence cruelly felt, but a presence stronger and more eloquent than absence itself.

The difficulty of the seventh day is the “silence” that surrounds it, and the length of the duration that accompanies it. In this case, we can do no better than rely on the “Master of eloquence and silence” to guide us in our passage between the silence of man and this silence of God concerning this “ecclesiastical mission” invisible to human eyes, but alive in the spirit of God and in His providence for us.

I thank the Lord for allowing me to write these lines. I wrote them “here”, “up close” (for some), whereas I used to write them from “there”, “from afar” (for others). And I pray to the Lord that He may  affirm us all together in the work of the Spirit who unites us in adversity and in ordeals, so that He may be glorified in us. And that afterwards, He who has become the “master of eloquence and silence” may be present among us.