Exhibition organized May 14-June 30, 2019, at the Russian Orthodox Cultural and Spiritual Center, 1 quai Branly, Paris (7ème arrondissement), on the occasion of the 50th anniversary of the repose of the famous monk iconographer. 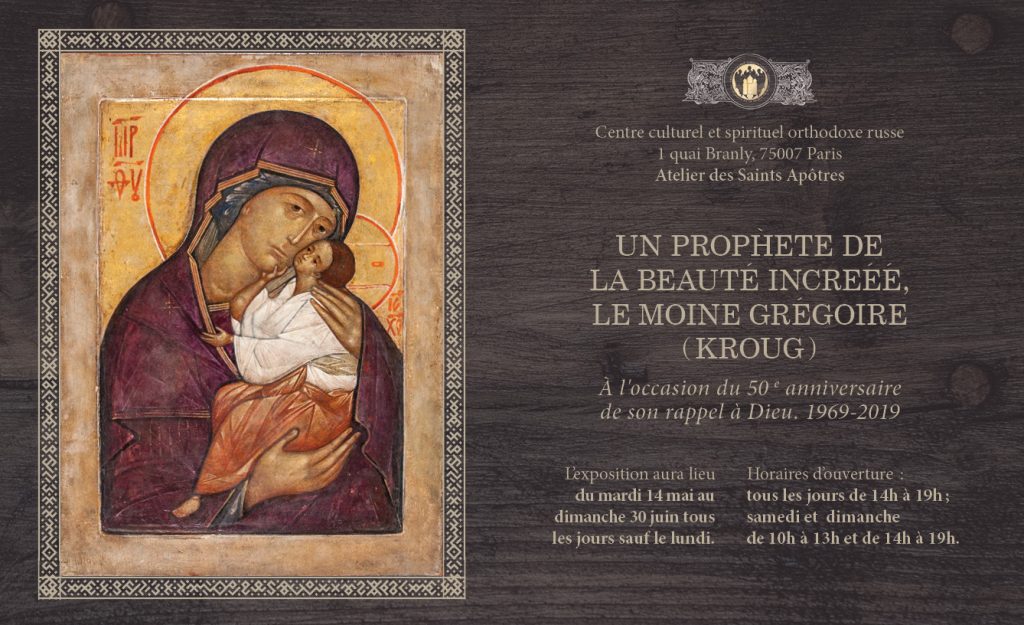 It is the first exhibition devoted to the work of George Krug, this painter who emigrated from Russia. He became a monk just after the war under the name of Gregory, and lived for more than twenty years at the hermitage of the Holy Spirit, in the solitude of the forest of Rambouillet. Leonid Ouspensky’s friend and helper since their meeting in 1931, he took an equal part in the return to traditional iconography. Through the depth of his inspiration and his exceptional artistic talent, he was the spiritual indicator for this move back to tradition.

A hundred works coming from several European countries have been collected for this exhibition. It features the brilliant painter’s journey, an artist who was unanimously appreciated during his lifetime by all Christians. Many of his works are indeed owned by Roman Catholic communities. His journey led him from attempts at Western iconography during the twenty years he lived as a hermit, to his achievement as a painter and as a contemplative.

Endowed with the spiritual sensitivity of a prophet, he manifested through his art the true nature of the icon and led it to its summit, at the level of a revelation of the uncreated beauty.

Several books have been published about his work since his repose, both in the United States and in Europe, but his works themselves had never been presented to the public. Most of them being frescoes or iconostases, only a few could be moved.
To give a more complete overview of the work, excursions will be organized during the duration of the exhibition to churches in the Paris region which were decorated by this father of blessed memory. He worked at it until his last moments, despite his many illnesses, as the icon was his very breath and his life.

As a journalist of the time rightly said, “Painting was his prayer”.