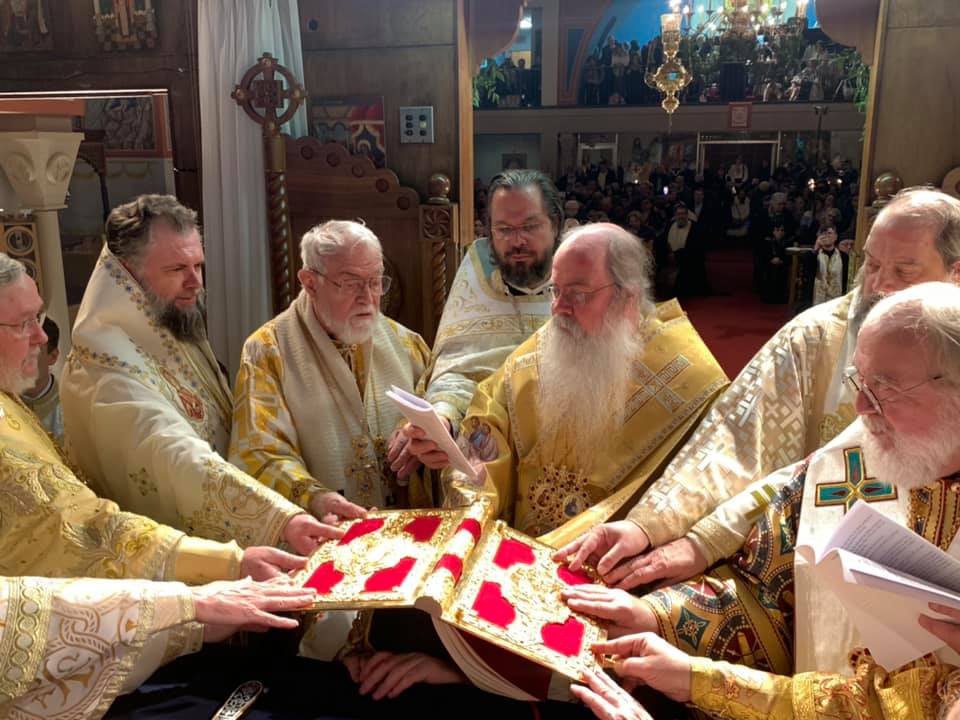 Just a few days after consecrating Archimandrite Alexis (Trader) as Bishop of Bethesda at St. Nicholas Cathedral in Washington, D.C., His Beatitude Metropolitan Tikhon of Washington and All America and other hierarchs of the Orthodox Church in America consecrated Hieromonk Andrei (Hoarște) as Bishop of Cleveland, auxiliary to His Eminence Archbishop Nathaniel of the Romanian Episcopate.

The services were celebrated at St. George Cathedral in Southfield, Michigan on Friday, January 31 and Saturday, February 1, reports the Orthodox Church in America.

The newly-consecrated Bishop Andrei was elected by the OCA Holy Synod on November 12, thus confirming the vote of the Electoral Congress of the Romanian Orthodox Episcopate of America on August 31.

In addition to Met. Tikhon and Abp. Nathanael, Archbishop Benjamin of San Francisco, Archbishop Irénée of Ottawa, Archbishop Michael of New York, Archbishop Alexander of Dallas, Archbishop David of Sitka, Bishop Paul of Chicago, Bishop Alexis of Bethesda, Metropolitan Gregory of Nyssa of the Carpatho Russian Diocese of North America, and Metropolitan Nicolae of the Romanian Orthodox Metropolia of the Americas (Romanian Patriarchate) participated in the service.

During the course of the Liturgy the next day, Fr. Andrei was consecrated to the episcopacy.

His Beatitude offered a homily, noting that, “We have gathered here today to celebrate a great event: the consecration and ordination of a new bishop for Christ’s Holy Church.”

He also noted that Bishop Andrei had made “a full confession of the Orthodox faith. He recited the Creed, and he expressed his loyalty to the theology of the Ecumenical Councils and the Church Fathers.”

Emphasizing the role of the bishop, Met. Tikhon noted: “Saint Irenaeus, a bishop only two generations removed from the Apostles, emphasized this connection between the Bishop and the Gospel when he said: ‘We have learned from none others the plan of our salvation, than from [the apostles] through whom the Gospel has come down to us, which they did at one time proclaim in public, and, at a later period, by the will of God, handed down to us in the Scriptures, to be the ground and pillar of our faith.’

“So according to Saint Irenaeus, the bishop must publicly proclaim the Gospel truth of the Scriptures.”

“So with these things in mind, let us pray for the new bishop, Bishop Andrei. We pray that he may be the bishop that God has called him to be, a bishop who preaches the Gospel at all times. We pray that his flock and indeed the entire world might see Christ through him. And in this way, in seeing Christ through the bishop, the entire world will be inspired and enlivened to struggle more and more in the their daily lives,” the OCA primate encouraged.

Bishop Andrei (Hoarște) was born in 1982 into an Orthodox Christian family in Făgăraș, Romania. At the age of 15, he moved with his family to the United States where they established their home in Dearborn Heights, Michigan, becoming members of Sts. Peter & Paul Romanian Orthodox Church. While completing his high school and undergraduate studies, he was active in the life of the parish and Episcopate. In September 2004, with the blessing of His Eminence, Archbishop Nathaniel, he began pursuing theological studies at Holy Cross Greek Orthodox School of Theology in Brookline, Massachusetts, graduating in 2008 with a Master of Divinity Degree and working at the same time for the Master of Theology Degree. In October 2010, he commenced doctoral studies at the Pontifical Oriental Institute in Rome, Italy, earning a Doctorate of Theology Degree in June 2019 in the field of dogmatic/liturgical studies. He was ordained into the Holy Diaconate in September 2012 and then the Holy Priesthood that December by Archbishop Nathaniel, who subsequently appointed him to lead the Episcopate’s Department of Youth & Young Adult Ministry in 2013 and then as Vicar of Canada in 2014 to assist with the administrative and pastoral responsibilities of the Episcopate. At the request of Archbishop Nathaniel and in accordance with the ROEA By-Laws, the Church Congress of the Romanian Orthodox Episcopate of America in Special Electoral Session elected him as a candidate for the office of Auxiliary Bishop on August 31, 2019. On October 13, 2019, he received the monastic tonsure and was given the name Andrei. He was consecrated as a hierarch on February 1, 2020.