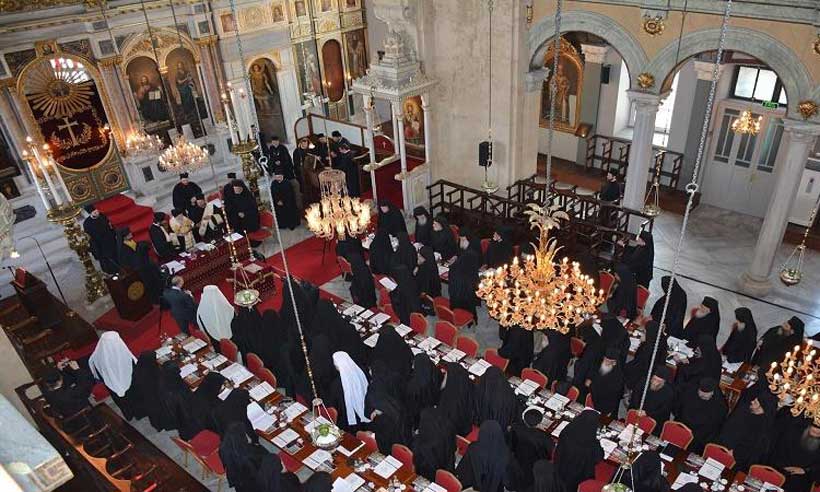 Invited by Patriarch Bartholomew, more than 100 metropolitans and archbishops (Ecumenical Patriarchate) from around the world gathered in Constantinople (Istanbul, Turkey) to participate in a Synaxis (assembly) of bishops chaired by the Ecumenical Patriarch.

The work of the Synaxis began on September 1, after the celebration of the Divine Liturgy in the patriarchal Cathedral of Saint George (Constantinople). The ensuing plenary sessions were held at the Holy Trinity Church in Taksim Square and continued until September 4.

In his opening address, greeting the bishops of the Church, the Ecumenical Patriarch Bartholomew made a long statement. Here are some excerpts:

Permit us to take the opportunity of conveying our righteous pride as well as our great satisfaction and delight, along with our patriarchal commendation and wholehearted congratulations, to all of you as our most reverend brothers and concelebrants for the work that you conduct – each of you in the place that you were assigned – for the glory of God, the proclamation of the Gospel and the salvation of souls. Inasmuch as, by God’s mercy, we hold the primacy of honor in the Orthodox Church, we also have the capacity to be personally acquainted with many of the Hierarchs in the local Autocephalous Churches. This familiarity renders our inner conviction still more adamant that the Hierarchy of the Ecumenical Patriarchate maintains a high standard, being qualified to respond to the expectations of the Church and confront the challenges of our time, because it includes in its ranks worthy Hierarchs, virtuous theologians, educated scholars, passionate missionaries, renowned authors, erudite professors and excellent preachers. This is why we are deeply honored and proud of you, brothers, for comprising this dignified chorus of Hierarchs of the Throne of the Mother Church…

As you know, for the Orthodox Church, intimate and personal communion constitutes an event and expression of faith – literally, a way of life – enabling us to move outside of ourselves in order to acquire an understanding in Christ of the meaning of life, to listen to the opinion of others, to further cultivate our perception, and to approach our fellow human beings with love. After all, for the One, Holy, Catholic and Apostolic Church, where all of us are humble servants, the perfect way of life is for us to be in communion with God and other human beings…

The Ecumenical Patriarchate is, for Orthodoxy, a leaven “which leavens the whole lump” (cf. Gal. 5.9) of the Church and of history…

Thus, with the grace of God, we journey through time and history with an awareness that the Orthodox Church is not the Church of triumphs but of trials; nor does it comprise an earthly theocracy, but the Church of Christ, namely the Church of the Last Times and His Kingdom, “which has no end.” As the guardian of the holy and sacred traditions of Orthodoxy, as well as of the dogmas alike of the Holy Seven Ecumenical Councils and other local councils, but also of the teachings of the Holy Fathers, the Ecumenical Patriarchate exists as “the small flock” (Luke 12:32)…

No matter how much some wish to embellish the situation in Ukraine, history proves them wrong and presents indisputable arguments demonstrating that the origin of difficulties and reactions in Ukraine are neither a recent phenomenon nor something created by the Ecumenical Patriarchate. Already from the early 14thcentury, when the see of the Kyivan Metropolis was moved without the canonical permission of the Mother Church to Moscow, there have been tireless efforts on the part of our Kyivan brothers for independence from ecclesiastical control by the Moscow center. Indeed, the obstinacy of the Patriarchate of Moscow was instrumental in occasionally creating repeated mergers and restorations of ecclesiastical eparchies, uncanonical elections of Bishops as well as schisms, which still afflict the pious Ukrainian people.

However, beyond all this, a study of the matter in the light of the sacred canons does not justify any intervention whatsoever by the Church of Russia. The Tome proclaiming Moscow as a Patriarchate does not include the region of today’s Metropolis of Kyiv in the jurisdiction of Moscow. Moreover, after the well-known manner of proclamation of Moscow as a Patriarchate by Ecumenical Patriarch Jeremiah II (Tranos), the canonical dependence of Kyiv to the Mother Church of Constantinople remained constant and uninterrupted. In the year 1686, our predecessor, the late Patriarch Dionysios IV, following great political pressure from the harrowing circumstances and for peace in the local Church, was obliged to issue a letter granting Moscow the license to ordain the Metropolitan of Kyiv on the inviolable condition that every Metropolitan of Kyiv would commemorate the name of the Ecumenical Patriarch as his ecclesiastical superior and authority, but also to demonstrate the canonical jurisdiction of Constantinople over this Metropolis…

In any case, it is true that the occasional deliberate efforts of the Church of Russia to resolve this matter failed. Thus, since Russia, as the one responsible for the current painful situation in Ukraine, is unable to solve the problem, the Ecumenical Patriarchate assumed the initiative of resolving the problem in accordance with the authority afforded to it by the Sacred Canons and the jurisdictional responsibility over the eparchy of Kyiv, receiving a request to this end by the honorable Ukrainian Government, as well as recurring requests by “Patriarch” Philaret of Kyiv appealing for our adjudication of his case.

At our instruction, the right reverend Bishop and professor Makarios of Christoupolis studied the question of Ukraine for many days, and the fruit of his extensive research into this complicated matter was a document of over ninety pages, which His Grace offered to the Mother Church. We thank and congratulate him. And since he already has a firm grasp of the issue, we have asked him to address this Venerable Body on the ecclesiastical perspective of the timely issue of Ukraine, and we are certain that all of us will have much to benefit from listening to him…

We imagine that all of the Hierarchs serving within the jurisdiction of the Ecumenical Throne know very well that the 4thEcumenical Council, among other decisions, honored the exceptional privilege of “the right to appeal” (ekkliton) of the Throne of Constantinople with the decrees of its 9thand 17thCanons. Numerous instances of the exercise of this right to appeal by Hierarchs and clergy of other jurisdictions have been recorded through the centuries in the historical journey of the Mother Church. Worthy of mention here is the determination of the canonist Miodrag Petrovic, that “the Archbishop of Constantinople alone has the privilege to judge and adjudicate conflicts of bishops, clergy and metropolitans of other patriarchs…”

During the first millennium, our blessed forefathers confronted the temptation of heresy. The great temptation of the second millennium, which was also bequeathed to the millennium we have now entered, is the status of jurisdictions. The source of this problem is ethnophyletism, the propensity to expansionism and the disregard of the boundaries defined by the Patriarchal and Synodal Tomes. The Ecumenical Patriarchate bears the responsibility of setting matters in ecclesiastical and canonical order because it alone has the canonical privilege as well as the prayer and blessing of the Church and the Ecumenical Councils to carry out this supreme and exceptional duty as a nurturing Mother and birth-giver of Churches. If the Ecumenical Patriarchate denies its responsibility and removes itself from the inter-Orthodox scene, then the local Churches will proceed “as sheep without a shepherd” (Matt. 9.36), expending their energy in ecclesiastical initiatives that conflate the humility of faith and the arrogance of power.

All the grandeur of our Patriarchate is exhausted in the service to the mystery of the Church. Its uniqueness does not lie in the possession of some superhuman secular power, but in the humble and selfless desire to subject the temptation of power to grace, while transforming the insecurity and fear of possessing and dominating to freedom and grace. It is here that we experience the final glory of the spirit identified with the ultimate humility, the power “fulfilled in weakness.” (2 Cor. 12:9)…

In concluding our address, let us offer glory and gratitude to God who is worshipped in Trinity for deeming us worthy of this immense joy to assemble again in the same place after three years, in accordance with our personal promise, so that we might deliberate together in the name of our Lord Jesus Christ, who is in our midst. We thank all of you once more and many times over, joyfully greeting and embracing each one of you, while proclaiming with one voice and one heart: May the name of the Lord be blessed, from now and to the ages…”

Metropolitans and Archbishops delivered some papers on a variety of ecclesiastical, pastoral and theological points. And these were discussed at length:

“Granting Autocephaly and the Relevant Privileges of the Mother Church: historical, Canonical and Theological Perspectives,”

“The Privilege of Eccliton (Right to Appeal): historical, Canonical and Theological Perspectives.”

“An Assessment of the Recent Visits by the Patriarchal Delegation to the Local Orthodox Churches.”

“The Ecclesiastical Issue of Ukraine.”

“Historical Survey of the Church of Ochrid in Relation to a New Identity.”

“The Canonical and Ecclesiological Restoration of the Church of Skopje.”

“The Ecumenical Patriarchate and Its Eparchies Abroad.”

“The Ecumenical Patriarchate and Theological Learning.”

On September 1, after the Divine Liturgy at the Church of Saint George, the patriarch and all the hierarchs present signed the Act of the New Indiction which marks the beginning of the Ecclesiastical New Year,  as is the tradition.

Since 1989 (see the patriarchal encyclical), this day is also dedicated to prayers for the preservation and protection of the natural environment.