On May 26, 2019, the 5th Sunday of Pascha, the Sunday of the Samaritan, His Holiness Patriarch Kirill of Moscow and All Russia celebrated the great consecration of the Church de Tous-les-Saints [All-Saints], and presided at the celebration of the Divine Liturgy. 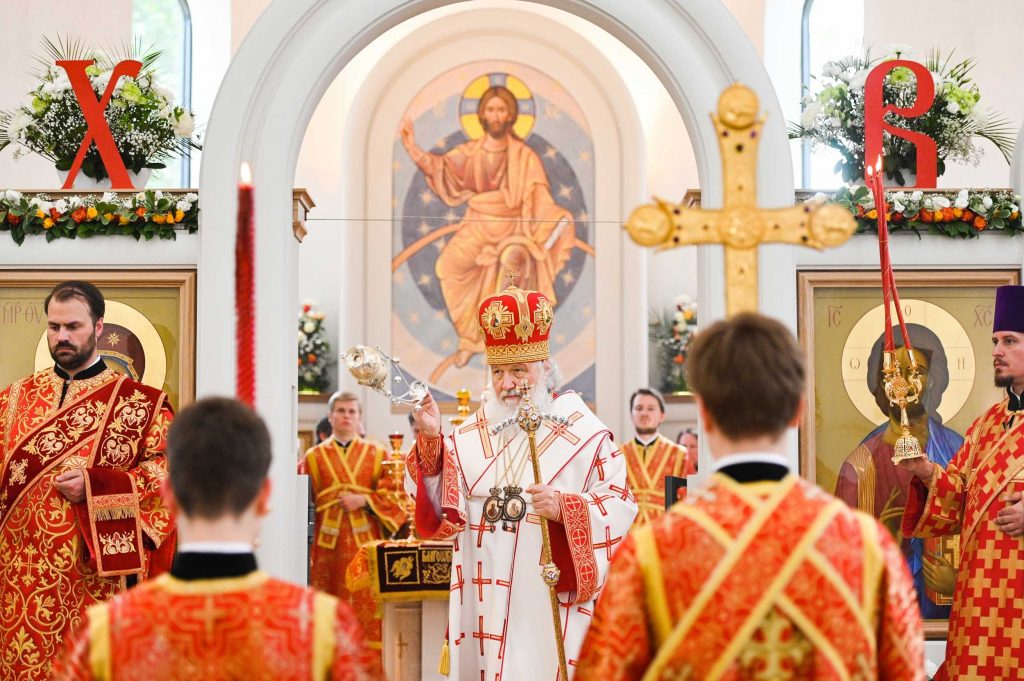 The service was celebrated in Church Slavonic and French.

For the people who were not able to enter the church and had to remain on the forecourt, the service was projected on large screens.

Patriarch Kirill gave a homily at the end of the Divine Liturgy.

Hegumen Philip (Ryabykh), the rector of the All Saints parish in Strasbourg addressed the patriarch on behalf of the community,

“… Many of those present here have collaborated in this work, and you are the first of them, Your Holiness, because it was your idea to create a parish and build a church here in Strasbourg. We are happy to have been God’s co-workers. All the saints, to whom this church is dedicated, especially the saints of the first millennium of Christianity who have illuminated this earth with their spiritual exploits, have also worked with us.”

Father Philip also mentioned Saint Odile, the patron saint of Alsace, who did a lot to implant Christianity in the region during the second half of the 7th century and the beginning of the 8th. And he offered an icon of this saint, painted by Christian iconographers, to Patriarch Kirill. He also presented the primate of the Russian Orthodox Church with an insignia, created by the sculptor who made the mosaics and ceramics decorating the church.
The rector of All Saints parish stressed that the patriarch’s visit was a great joy, not only for the Russian Orthodox community, but also for all the inhabitants of Strasbourg and its region.

Then on behalf of the inhabitants of the city, R. Ries, the mayor of Strasbourg, addressed his Holiness. He recalled the beginnings of the parish, when the faithful gathered to pray in a garage converted into a church. When it was decided to build a church, it was first necessary to solve a number of administrative questions, to look for land, to sign a lease, then the blessing of the foundation stone took place in 2014.
The mayor thanked Dmitri Pshenichnikov, the Russian architect, and his French colleague, Michel Arnold. “I think they did a great job,” Ries said, highlighting that he had not received any complaints from local residents during the whole construction.

“From now on, this church is part of Strasbourg’s religious legacy, just like the famous Roman Catholic cathedral, which recently celebrated its millennium, or the Protestant church, or the Great Synagogue, opened immediately after the war, or the great mosque, at the inauguration of which I participated,” said the mayor.

“May this church serve the Orthodox community, the inhabitants of Strasbourg and of its surroundings. May it allow them to raise their prayers and to serve the Lord, as faith demands,” concluded Roland Ries.

Then the primate of the Russian Orthodox Church gave also a speech, before offering an icon of the Savior to the parish and giving distinctions, especially to Hegumen Philip, who he elevated to the rank of archimandrite.

After the Divine Liturgy, Patriarch Kirill visited the site and the various premises, including the spiritual and cultural center, located near the church. The students of Sunday School wished the Primate of the Russian Orthodox Church his namesday, which he had celebrated the day before.

The All Saints church has already become a cultural monument for Strasbourg, n the same way as the Russian churches in Paris, Nice, and Cannes. Some have nicknamed it  the “pearl of Strasbourg” or the “white swan of Strasbourg”.

In its early days, the parish community gathered in a small local down-town. The French-speaking community of the Moscow Patriarchate in Strasbourg is still celebrating the Divine Liturgy there.

In April 2007, All Saints parish settled in a former garage, but the building quickly became too small for the growing community, and did not meet their needs. After visiting the Primate of the Russian Church in Strasbourg in 2007, they slowly began to look for a piece of land where they could build an Orthodox church in the style of traditional Russian architecture. The arrival of Roland Ries and his team at the town hall gave a new impetus to the project.

On January 17, 2011, the City Council made the historic decision to give some land to the Russian Orthodox Church for the construction of a church and of parish buildings on the banks of the Marne Canal, in the Quinzième Conseil neighborhood. The land is located not far from the “Orangerie” park and the European institutions, namely the Council of Europe, the European Court of Human Rights, and the European Parliament.

On December 21, 2012, the authorities issued the building permit, signed by Mayor Roland Ries. On March 15, the lease signed between All Saints parish and the Strasbourg city hall for 99 years, for the symbolic annual sum of 15 euros, came into force.

On December 7, 2013, the celebration of a moleben marked the beginning of the work, in the presence of the Mayor of the city and of diplomatic representatives to the Council of Europe.

The blessing of the foundation stone took place on September 30, 2014. The delivery and assembly of the dome required special permissions.

The spiritual and cultural center, built with private donations, was inaugurated on May 19, 2017.

Hegumen Philip (Ryabykh), the rector of the parish and the representative of the Moscow Patriarchate to the Council of Europe, cut the red ribbon with the mayor of Strasbourg.

On May 25, 2015, on the Feast of the Ascension, Hegumen Philip dedicated the parish house.

The Cultural and Spiritual Center is also home to the Representation of the Orthodox Church to the Council of Europe and to the administration of the parish. It contains a library, a conference room, classrooms, a refectory, and various rooms for staff.

On June 4, 2017, a first Divine Liturgy was celebrated in the premises of the center, pending the completion of the work of the church.

On December 23, 2018, Bishop Nestor of Chersonese (now Archbishop of Madrid and Lisbon) celebrated the small consecration of the church, where all the services have since been celebrated.