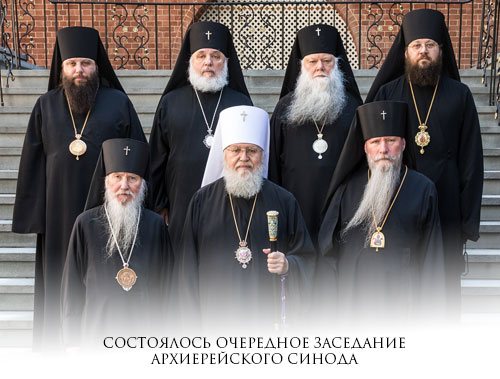 Having heard a report from the Pre-Council Commission, and also from Archbishop Peter, the President of the Jubilee Committee preparing for the 100th anniversary celebrations of the Russian Church Abroad, the Synod of Bishops confirmed the previous decision to conduct convene a Council of Bishops at St Elizabeth Convent in the Bavarian city of Buchendorf, Germany, in June of 2020. Coinciding with the council will be celebrations of the Centennial of the Russian Church Abroad by the German diocese.

The bishops then heard a report by Archbishop Gabriel on the recent pilgrimage of clergyman and laity of the Russian Church Abroad to the holy sites of the Russian Orthodox Church and their meetings with hierarchs, clergy and believers, which took place this summer.

Bishop Irenei then delivered a report on inter-Orthodox relations and the present situation at Elevation of the Holy Cross Cathedral in Geneva. A general parish assembly was recently held and new parish by-laws were adopted.

In discussing the question of adding to the ranks of the episcopacy, the Synod of Bishops decided in view of circumstances to permanently remove the candidacy of Archimandrite Alexander (Belya) as Bishop of Miami and Vicar of the Eastern American Diocese.

Administrative and financial matters were also discussed at the Synod of Bishops, as well as intercessions by the hierarchs for awards to clergy and laity in their respective dioceses.