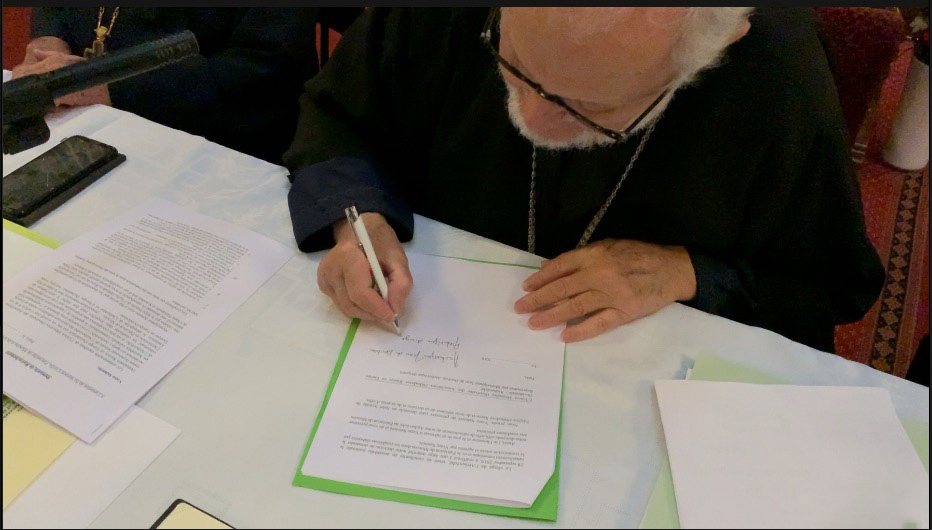 The pastoral assembly began with the celebration of the Divine Liturgy, presided by Archbishop Jean accompanied by the deans of the Archdiocese. The meeting began at 10:00 am with the invocation of the Holy Spirit. Archbishop Jean first briefly summarized the events that preceded the meeting and explained the purpose and meaning of this meeting, then gave the floor to Father Jean Gueit, who, for his part, presented the points of the charter of canonical attachment to the Moscow Patriarchate. The clerics were then able to ask questions to which Archbishop Jean responded. Then, after having distributed to the copies of the text of the canonical attachment request to those present, Archbishop Jean read it out aloud, explaining certain points. In the end, he asked the clergy to agree that he signs it. 51 clergy present at the assembly, plus 37 clerics who were unable to come but affirmed their full support for the Archbishop, accepted the pastoral decision of Archbishop Jean to ask for communion and canonical unity in Moscow Patriarchate to ensure the continuity of the ecclesial, liturgical and sacramental life of the Archdiocese of the parishes of Russian tradition in Western Europe. After having signed his name at the end of this request, Arhbishop Jean thanked all the clergy, present and absent, who trusted him in his effort to find canonical protection for the Archdiocese and thus allow all the members to remain in communion with the whole of Orthodoxy.

Finally, a multos annos to Patriarch Kyrill, Archbishop John and all members of the Archdiocese was proclaimed by Archdeacon Vsevolod Borzakovsky.