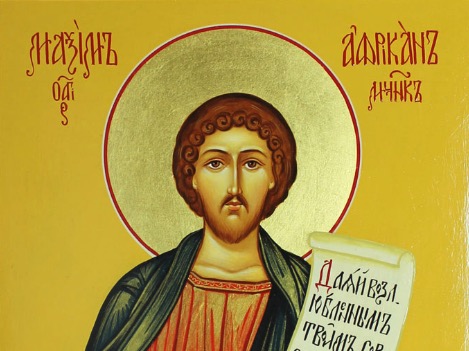 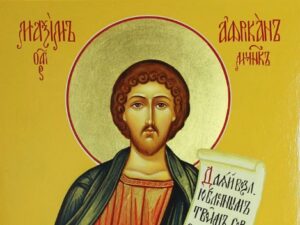 The Holy Martyr Terence and his companions suffered under the emperor Decius (249-251). The emperor issued an edict commanding all subjects to offer sacrifice to the pagan idols.

When the governor of Africa Fortunianus received this edict, he gathered the people into the city square, set out cruel instruments of torture and declared that everyone without exception had to offer the sacrifice to the idols.

Many, afraid of torture, complied. However, Saint Terence and forty other Christians bravely affirmed their faith in the Savior and ridiculed the idols. Fortunianus was amazed at their boldness and he asked how they as rational people, could confess as God, One Whom the Jews crucified as a malefactor.

Saint Terence answered that their belief was in the Savior, Who voluntarily endured death on the Cross and rose on the third day. Fortunianus saw that Terence inspired the others by his example, and so he ordered him to be isolated in prison with his three closest companions: Africanus, Maximus, and Pompeius. Fortunianus was determined to force the rest of the martyrs, including Zeno, Alexander and Theodore, to renounce Christ.

Neither threats nor terrible tortures could sway the holy martyrs. They burned them with red-hot iron, they poured vinegar on the wounds, they sprinkled on salt, and they raked them with iron claws. In spite of their sufferings, the saints did not weaken in their confession of Christ, and the Lord gave them strength.

Fortunianus gave orders to lead the martyrs into the pagan temple, and once again he urged them to offer sacrifice to the idols. The valiant warriors of Christ cried out, “O Almighty God, Who once sent down fire on Sodom for its iniquity, destroy this impious temple of idolatry.” The idols fell down with a crash, and then the temple lay in ruins. The enraged governor gave orders to execute them, and the martyrs, glorifying God, bowed their necks beneath the executioner’s sword.

After the execution of the thirty-six martyrs, Fortunianus summoned Terence, Maximus, Africanus and Pompeius before him. He showed them the martyrs’ bodies and again urged them to offer sacrifice to the idols. The martyrs refused. The governor put heavy chains on them, and gave orders to starve them to death. By night, an angel of the Lord removed the martyrs’ chains and fed them.

In the morning, the guards found the saints cheerful and strong. Then Fortunianus ordered sorcerers and conjurers to carry snakes and all kinds of poisonous creatures into the prison. The guards looked into the cell through an opening in the ceiling and saw the martyrs unharmed, praying, and the snakes crawling at their feet. When the sorcerers opened the door of the prison cell, the snakes bit them. The furious Fortunianus gave orders to behead the holy martyrs. Christians took up their holy bodies and buried them with reverence outside the city.

A chosen army of athletes from Africa contested nobly for the faith. / They were of one mind and heart / and of one accord in their struggles. / Now they intercede that we all may be saved.

Kontakion of the saints, tone 1

Let us celebrate the memory of Terence and his companions / and draw near to receive healing. / For with grace and power of the Spirit / they heal the sicknesses of our souls.

4
Who has performed and done it, calling the generations from the beginning? ‘I, the Lord, am the first; and with the last I am He.’”
5
The coastlands saw it and feared, the ends of the earth were afraid; they drew near and came.
6
Everyone helped his neighbor, and said to his brother, “Be of good courage!”
7
So the craftsman encouraged the goldsmith; he who smooths with the hammer inspired him who strikes the anvil, Saying, “It is ready for the soldering”; then he fastened it with pegs, that it might not totter.
8
“But you, Israel, are My servant, Jacob whom I have chosen, the descendants of Abraham My friend.
9
You whom I have taken from the ends of the earth, and called from its farthest regions, and said to you, ‘You are My servant, I have chosen you and have not cast you away:
10
fear not, for I am with you; be not dismayed, for I am your God. I will strengthen you, yes, I will help you, I will uphold you with My righteous right hand.’
11
“Behold, all those who were incensed against you shall be ashamed and disgraced; they shall be as nothing, and those who strive with you shall perish.
12
You shall seek them and not find them – those who contended with you. Those who war against you shall be as nothing, as a nonexistent thing.
13
For I, the Lord your God, will hold your right hand, saying to you, ‘Fear not, I will help you.’
14
“Fear not, you worm Jacob, you men of Israel! I will help you, says the Lord and your Redeemer, the Holy One of Israel.

20
A wise son makes a father glad, but a foolish man despises his mother.
21
Folly is joy to him who is destitute of discernment, but a man of understanding walks uprightly.
22
Without counsel, plans go awry, but in the multitude of counselors they are established.
23
A man has joy by the answer of his mouth, and a word spoken in due season, how good it is!
24
The way of life winds upward for the wise, that he may turn away from hell below.
25
The Lord will destroy the house of the proud, but He will establish the boundary of the widow.
26
The thoughts of the wicked are an abomination to the Lord, but the words of the pure are pleasant.
27
He who is greedy for gain troubles his own house, but he who hates bribes will live.
28
The heart of the righteous studies how to answer, but the mouth of the wicked pours forth evil.
29
The Lord is far from the wicked, but He hears the prayer of the righteous.
30
The light of the eyes rejoices the heart, and a good report makes the bones healthy.
31
The ear that hears the rebukes of life will abide among the wise.
32
He who disdains instruction despises his own soul, but he who heeds rebuke gets understanding.
33
The fear of the Lord is the instruction of wisdom, and before honor is humility.
1
The preparations of the heart belong to man, but the answer of the tongue is from the Lord.
2
All the ways of a man are pure in his own eyes, but the Lord weighs the spirits.
3
Commit your works to the Lord, and your thoughts will be established.
4
The Lord has made all for Himself, yes, even the wicked for the day of doom.
5
Everyone proud in heart is an abomination to the Lord; though they join forces, none will go unpunished.
6
In mercy and truth Atonement is provided for iniquity; and by the fear of the Lord one departs from evil.
7
When a man’s ways please the Lord, he makes even his enemies to be at peace with him.
8
Better is a little with righteousness, than vast revenues without justice.
9
A man’s heart plans his way, but the Lord directs his steps.