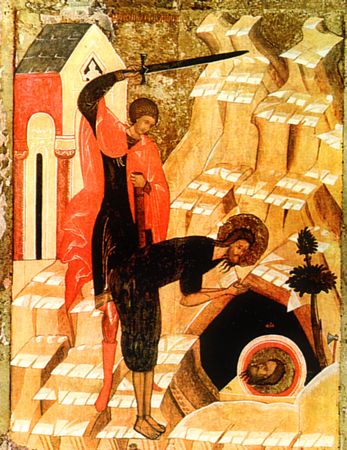 The Beheading of the Holy Glorious Prophet, Forerunner, and Baptist John

The Beheading of the Prophet, Forerunner of the Lord, John the Baptist: The Evangelists Matthew (Mt.14:1-12) and Mark (Mark 6:14-29) provide accounts about the martyric end of John the Baptist in the year 32 after the Birth of Christ.

Following the Baptism of the Lord, Saint John the Baptist was locked up in prison by Herod Antipas, the Tetrarch (ruler of one fourth of the Holy Land) and governor of Galilee. (After the death of king Herod the Great, the Romans divided the territory of Palestine into four parts, and put a governor in charge of each part. Herod Antipas received Galilee from the emperor Augustus).

The prophet of God John openly denounced Herod for having left his lawful wife, the daughter of the Arabian king Aretas, and then instead cohabiting with Herodias, the wife of his brother Philip (Luke 3:19-20). On his birthday, Herod made a feast for dignitaries, the elders and a thousand chief citizens. Salome, the daughter of Herod, danced before the guests and charmed Herod. In gratitude to the girl, he swore to give her whatever she would ask, up to half his kingdom.

The vile girl on the advice of her wicked mother Herodias asked that she be given the head of John the Baptist on a platter. Herod became apprehensive, for he feared the wrath of God for the murder of a prophet, whom earlier he had heeded. He also feared the people, who loved the holy Forerunner. But because of the guests and his careless oath, he gave orders to cut off the head of Saint John and to give it to Salome.

According to Tradition, the mouth of the dead preacher of repentance once more opened and proclaimed: “Herod, you should not have the wife of your brother Philip.” Salome took the platter with the head of Saint John and gave it to her mother. The frenzied Herodias repeatedly stabbed the tongue of the prophet with a needle and buried his holy head in a unclean place. But the pious Joanna, wife of Herod’s steward Chuza, buried the head of John the Baptist in an earthen vessel on the Mount of Olives, where Herod had a parcel of land. (The Uncovering of the Venerable Head is celebrated (February 24). The holy body of John the Baptist was taken that night by his disciples and buried at Sebastia, there where the wicked deed had been done.

After the murder of Saint John the Baptist, Herod continued to govern for a certain time. Pontius Pilate, governor of Judea, later sent Jesus Christ to him, Whom he mocked (Luke 23:7-12).

The judgment of God came upon Herod, Herodias and Salome, even during their earthly life. Salome, crossing the River Sikoris in winter, fell through the ice. The ice gave way in such a way that her body was in the water, but her head was trapped above the ice. It was similar to how she once had danced with her feet upon the ground, but now she flailed helplessly in the icy water. Thus she was trapped until that time when the sharp ice cut through her neck.

Her corpse was not found, but they brought the head to Herod and Herodias, as once they had brought them the head of Saint John the Baptist. The Arab king Aretas, in revenge for the disrespect shown his daughter, made war against Herod. The defeated Herod suffered the wrath of the Roman emperor Caius Caligua (37-41) and was exiled with Herodias first to Gaul, and then to Spain.

The Beheading of Saint John the Baptist, a Feast day established by the Church, is also a strict fast day because of the grief of Christians at the violent death of the saint. In some Orthodox cultures pious people will not eat food from a flat plate, use a knife, or eat food that is round in shape on this day.

Today the Church makes remembrance of Orthodox soldiers killed on the field of battle, as established in 1769 at the time of Russia’s war with the Turks and the Poles.

The memory of the righteous is celebrated with hymns of praise, but the Lord’s testimony is sufficient for you, O Forerunner. You were shown in truth to be the most honorable of the prophets, for you were deemed worthy to baptize in the streams of the Jordan Him whom they foretold. Therefore, having suffered for the truth with joy, you proclaimed to those in hell God who appeared in the flesh, who takes away the sin of the world, / and grants us great mercy.

The glorious beheading of the Forerunner, became an act of divine dispensation, for he preached to those in hell the coming of the Savior. Let Herodias lament, for she entreated lawless murder, loving not the law of God, nor eternal life, but that which is false and temporal.

25
And as John was finishing his course, he said, ‘Who do you think I am? I am not He. But behold, there comes One after me, the sandals of whose feet I am not worthy to loose.’
26
Men and brethren, sons of the family of Abraham, and those among you who fear God, to you the word of this salvation has been sent.
27
For those who dwell in Jerusalem, and their rulers, because they did not know Him, nor even the voices of the Prophets which are read every Sabbath, have fulfilled them in condemning Him.
28
And though they found no cause for death in Him, they asked Pilate that He should be put to death.
29
Now when they had fulfilled all that was written concerning Him, they took Him down from the tree and laid Him in a tomb.
30
But God raised Him from the dead.
31
He was seen for many days by those who came up with Him from Galilee to Jerusalem, who are His witnesses to the people.
32
And we declare to you glad tidings – that promise which was made to the fathers.
33
God has fulfilled this for us their children, in that He has raised up Jesus. As it is also written in the second Psalm: ‘You are My Son, today I have begotten You.’

14
Now King Herod heard of Him, for His name had become well known. And he said, “John the Baptist is risen from the dead, and therefore these powers are at work in him.”
15
Others said, “It is Elijah.” And others said, “It is the Prophet, or like one of the prophets.”
16
But when Herod heard, he said, “This is John, whom I beheaded; he has been raised from the dead!”
17
For Herod himself had sent and laid hold of John, and bound him in prison for the sake of Herodias, his brother Philip’s wife; for he had married her.
18
Because John had said to Herod, “It is not lawful for you to have your brother’s wife.”
19
Therefore Herodias held it against him and wanted to kill him, but she could not;
20
for Herod feared John, knowing that he was a just and holy man, and he protected him. And when he heard him, he did many things, and heard him gladly.
21
Then an opportune day came when Herod on his birthday gave a feast for his nobles, the high officers, and the chief men of Galilee.
22
And when Herodias’ daughter herself came in and danced, and pleased Herod and those who sat with him, the king said to the girl, “Ask me whatever you want, and I will give it to you.”
23
He also swore to her, “Whatever you ask me, I will give you, up to half my kingdom.”
24
So she went out and said to her mother, “What shall I ask?” And she said, “The head of John the Baptist!”
25
Immediately she came in with haste to the king and asked, saying, “I want you to give me at once the head of John the Baptist on a platter.”
26
And the king was exceedingly sorry; yet, because of the oaths and because of those who sat with him, he did not want to refuse her.
27
Immediately the king sent an executioner and commanded his head to be brought. And he went and beheaded him in prison,
28
brought his head on a platter, and gave it to the girl; and the girl gave it to her mother.
29
When his disciples heard of it, they came and took away his corpse and laid it in a tomb.
30
Then the apostles gathered to Jesus and told Him all things, both what they had done and what they had taught.