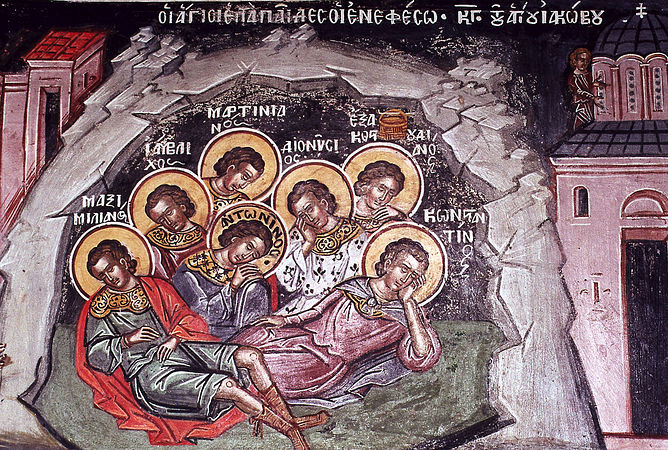 The Seven Youths of Ephesus: Maximilian, Iamblicus, Martinian, John, Dionysius, Exacustodianus (Constantine) and Antoninus, lived in the third century. Saint Maximilian was the son of the Ephesus city administrator, and the other six youths were sons of illustrious citizens of Ephesus. The youths were friends from childhood, and all were in military service together.

When the emperor Decius (249-251) arrived in Ephesus, he commanded all the citizens to offer sacrifice to the pagan gods. Torture and death awaited anyone who disobeyed. The seven youths were denounced by informants, and were summoned to reply to the charges. Appearing before the emperor, the young men confessed their faith in Christ.

Their military belts and insignia were quickly taken from them. Decius permitted them to go free, however, hoping that they would change their minds while he was off on a military campaign. The youths fled from the city and hid in a cave on Mount Ochlon, where they passed their time in prayer, preparing for martyrdom.

The youngest of them, Saint Iamblicus, dressed as a beggar and went into the city to buy bread. On one of his excursions into the city, he heard that the emperor had returned and was looking for them. Saint Maximilian urged his companions to come out of the cave and present themselves for trial.

Learning where the young men were hidden, the emperor ordered that the entrance of the cave be sealed with stones so that the saints would perish from hunger and thirst. Two of the dignitaries at the blocked entrance to the cave were secret Christians. Desiring to preserve the memory of the saints, they placed in the cave a sealed container containing two metal plaques. On them were inscribed the names of the seven youths and the details of their suffering and death.

The Lord placed the youths into a miraculous sleep lasting almost two centuries. In the meantime, the persecutions against Christians had ceased. During the reign of the holy emperor Theodosius the Younger (408-450) there were heretics who denied that there would be a general resurrection of the dead at the Second Coming of our Lord Jesus Christ. Some of them said, “How can there be a resurrection of the dead when there will be neither soul nor body, since they are disintegrated?” Others affirmed, “The souls alone will have a restoration, since it would be impossible for bodies to arise and live after a thousand years, when even their dust would not remain.” Therefore, the Lord revealed the mystery of the Resurrection of the Dead and of the future life through His seven saints.

The owner of the land on which Mount Ochlon was situated, discovered the stone construction, and his workers opened up the entrance to the cave. The Lord had kept the youths alive, and they awoke from their sleep, unaware that almost two hundred years had passed. Their bodies and clothing were completely undecayed.

Preparing to accept torture, the youths once again asked Saint Iamblicus to buy bread for them in the city. Going toward the city, the youth was astonished to see a cross on the gates. Hearing the name of Jesus Christ freely spoken, he began to doubt that he was approaching his own city.

When he paid for the bread, Iamblicus gave the merchant coins with the image of the emperor Decius on it. He was detained, as someone who might be concealing a horde of old money. They took Saint Iamblicus to the city administrator, who also happened to be the Bishop of Ephesus. Hearing the bewildering answers of the young man, the bishop perceived that God was revealing some sort of mystery through him, and went with other people to the cave.

At the entrance to the cave the bishop found the sealed container and opened it. He read upon the metal plaques the names of the seven youths and the details of the sealing of the cave on the orders of the emperor Decius. Going into the cave and seeing the saints alive, everyone rejoiced and perceived that the Lord, by waking them from their long sleep, was demonstrating to the Church the mystery of the Resurrection of the Dead.

Soon the emperor himself arrived in Ephesus and spoke with the young men in the cave. Then the holy youths, in sight of everyone, lay their heads upon the ground and fell asleep again, this time until the General Resurrection.

The emperor wanted to place each of the youths into a jeweled coffin, but they appeared to him in a dream and said that their bodies were to be left upon the ground in the cave. In the twelfth century the Russian pilgrim Igumen Daniel saw the holy relics of the seven youths in the cave.

There is a second commemoration of the seven youths on October 22. According to one tradition, which entered into the Russian PROLOGUE (of Saints’ Lives), the youths fell asleep for the second time on this day. The Greek MENAION of 1870 says that they first fell asleep on August 4, and woke up on October 22.

There is a prayer of the Seven Sleepers of Ephesus in the GREAT BOOK OF NEEDS (Trebnik) for those who are ill and cannot sleep. The Seven Sleepers are also mentioned in the service for the Church New Year, September 1.

Troparion of the saint, tone 4
Your holy martyrs, O Lord, Through their sufferings have received their incorruptible crowns from You, our God. For having Your strength, they laid low their adversaries, And shattered the powerless boldness of demons. Through their intercessions, save our souls!

Kontakion of the saint, tone 4
Those who renounced the perishing comforts of this world, Preferring the eternal things of Heaven, Were incorrupt after death and rose from the dead And buried the snares of the devils! O Faithful, let us then honor them, singing a hymn of praise to Christ!

10
For godly sorrow produces repentance leading to salvation, not to be regretted; but the sorrow of the world produces death.
11
For observe this very thing, that you sorrowed in a godly manner: What diligence it produced in you, what clearing of yourselves, what indignation, what fear, what vehement desire, what zeal, what vindication! In all things you proved yourselves to be clear in this matter.
12
Therefore, although I wrote to you, I did not do it for the sake of him who had done the wrong, nor for the sake of him who suffered wrong, but that our care for you in the sight of God might appear to you.
13
Therefore we have been comforted in your comfort. And we rejoiced exceedingly more for the joy of Titus, because his spirit has been refreshed by you all.
14
For if in anything I have boasted to him about you, I am not ashamed. But as we spoke all things to you in truth, even so our boasting to Titus was found true.
15
And his affections are greater for you as he remembers the obedience of you all, how with fear and trembling you received him.
16
Therefore I rejoice that I have confidence in you in everything.

18
The disciples of John and of the Pharisees were fasting. Then they came and said to Him, “Why do the disciples of John and of the Pharisees fast, but Your disciples do not fast?”
19
And Jesus said to them, “Can the friends of the bridegroom fast while the bridegroom is with them? As long as they have the bridegroom with them they cannot fast.
20
But the days will come when the bridegroom will be taken away from them, and then they will fast in those days.
21
No one sews a piece of unshrunk cloth on an old garment; or else the new piece pulls away from the old, and the tear is made worse.
22
And no one puts new wine into old wineskins; or else the new wine bursts the wineskins, the wine is spilled, and the wineskins are ruined. But new wine must be put into new wineskins.”