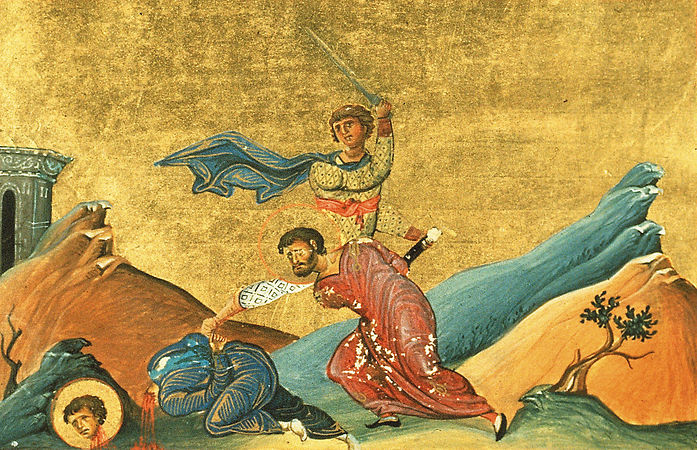 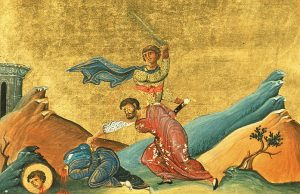 Saint Aquila, Apostle of the 70: It is possible that he was a disciple of the Apostle Paul, a native of Pontus and a Jew, living in the city of Rome with his wife Priscilla (they are commemorated on February 13 on the Greek Calendar). During the reign of the emperor Claudius (41-54) all the Jews were banished from Rome, so Saint Aquilla and his wife were compelled to leave. They settled in Corinth. A short while later, the holy Apostle Paul arrived there from Athens preaching the Gospel. Having made the acquaintance of Aquila, he began to live at his house and labored together with him, making tents.

Having received Baptism from the Apostle Paul, Aquila and Priscilla bacame his devoted and zealous disciples. They accompanied the apostle to Ephesus. The Apostle Paul instructed them to continue the preaching of the Gospel at Ephesus, and he himself went to Jerusalem, in order to be present for the feast of Pentecost. At Ephesus, Aquila and Priscilla heard the bold preaching of a newcomer from Alexandria, the Jew Apollos. He had been instructed in the fundamentals of the Faith, but knew only the baptism of John the Forerunner. They called him over and explained more precisely about the way of the Lord.

After the death of the emperor Claudius, Jews were permitted to return to Italy, and Aquila and Priscilla then returned to Rome. The Apostle Paul in his Epistle to the Romans recalls his faithful disciples, “Greet Priscilla and Aquila, my coworkers in Christ Jesus, who put forth their heads for my soul, whom I do not alone thank, but also all the Church of the Gentiles and the church of their household” (Rom. 16: 3-4). Saint Aquila did not long dwell in Rome: the Apostle Paul made him a bishop in Asia. Saint Aquila zealously labored at preaching the Gospel in Asia, Achaia and Heraklia. He converted pagans to Christ, he confirmed newly-converted Christians in the faith, he established presbyters and destroyed idols. Saint Priscilla constantly assisted him in the apostolic work. Saint Aquila ended his life a martyr: pagans murdered him. According to the Tradition of the Church, Saint Priscilla was killed together with him.

As a disciple and companion of Paul / you received in your soul the grace of preaching. / You shone in the night of error and struggled for the Lord’s glory. / Sacred minister of the Savior, Aquila, we all acclaim you.

The Church has acquired you, O Aquila, / who shine like a great sun. / With the splendor of your teaching / she enlightens those who honor you with faith, / glorious Apostle of the Lord.

1
I tell the truth in Christ, I am not lying, my conscience also bearing me witness in the Holy Spirit,
2
that I have great sorrow and continual grief in my heart.
3
For I could wish that I myself were accursed from Christ for my brethren, my countrymen according to the flesh,
4
who are Israelites, to whom pertain the adoption, the glory, the covenants, the giving of the law, the service of God, and the promises;
5
of whom are the fathers and from whom, according to the flesh, Christ came, who is over all, the eternally blessed God. Amen.

18
While He spoke these things to them, behold, a ruler came and worshiped Him, saying, “My daughter has just died, but come and lay Your hand on her and she will live.”
19
So Jesus arose and followed him, and so did His disciples.
20
And suddenly, a woman who had a flow of blood for twelve years came from behind and touched the hem of His garment.
21
For she said to herself, “If only I may touch His garment, I shall be made well.”
22
But Jesus turned around, and when He saw her He said, “Be of good cheer, daughter; your faith has made you well.” And the woman was made well from that hour.
23
When Jesus came into the ruler’s house, and saw the flute players and the noisy crowd wailing,
24
He said to them, “Make room, for the girl is not dead, but sleeping.” And they ridiculed Him.
25
But when the crowd was put outside, He went in and took her by the hand, and the girl arose.
26
And the report of this went out into all that land.