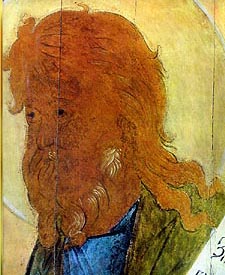 The Holy Prophet Ezekiel lived in the sixth century before the birth of Christ. He was born in the city of Sarir, and descended from the tribe of Levi; he was a priest and the son of the priest Buzi. Ezekiel was led off to Babylon when he was twenty-five years old together with King Jechoniah II and many other Jews during the second invasion of Jerusalem by the Babylonian king Nebuchadnessar.

The Prophet Ezekiel lived in captivity by the River Chebar. When he was thirty years old, he had a vision of the future of the Hebrew nation and of all mankind. The prophet beheld a shining cloud, with fire flashing continually, and in the midst of the fire, gleaming bronze. He also saw four living creatures in the shape of men, but with four faces (Ez. 1:6). Each had the face of a man in front, the face of a lion on the right, the face of an ox on the left, and the face of an eagle at the back (Ez. 1:10). There was a wheel on the earth beside each creature, and the rim of each wheel was full of eyes.

According to the explanation of the Fathers of the Church, the human likeness upon the sapphire throne prefigures the Incarnation of the Son of God from the Most Holy Virgin Mary, who is the living Throne of God. The four creatures are symbols of the four Evangelists: a man (St Matthew), a lion (St Mark), an ox (St Luke), and an eagle (St John); the wheel with the many eyes is meant to suggest the sharing of light with all the nations of the earth. During this vision the holy prophet fell down upon the ground out of fear, but the voice of God commanded him to get up. He was told that the Lord was sending him to preach to the nation of Israel. This was the begining of Ezekiel’s prophetic service.

The Prophet Ezekiel announces to the people of Israel, held captive in Baylon, the tribulations it would face for not remaining faithful to God. The prophet also proclaimed a better time for his fellow-countrymen, and he predicted their return from Babylon, and the restoration of the Jerusalem Temple.

There are two significant elements in the vision of the prophet: the vision of the temple of the Lord, full of glory (Ez. 44:1-10); and the bones in the valley, to which the Spirit of God gave new life (Ez. 37:1-14). The vision of the temple was a mysterious prefiguring of the race of man freed from the working of the Enemy and the building up of the Church of Christ through the redemptive act of the Son of God, incarnate of the Most Holy Theotokos. Ezekiel’s description of the shut gate of the sanctuary, through which the Lord God would enter (Ez. 44: 2), is a prophecy of the Virgin giving birth to Christ, yet remaining a virgin. The vision of the dry bones prefigured the universal resurrection of the dead, and the new eternal life bestowed by the Lord Jesus Christ.

The holy Prophet Ezekiel received from the Lord the gift of wonderworking. He, like the Prophet Moses, divided the waters of the river Chebar, and the Hebrews crossed to the opposite shore, escaping the pursuing Chaldeans. During a time of famine the prophet asked God for an increase of food for the hungry.

Ezekiel was condemned to execution because he denounced a certain Hebrew prince for idolatry. Bound to wild horses, he was torn to pieces. Pious Hebrews gathered up the torn body of the prophet and buried it upon Maur Field, in the tomb of Sim and Arthaxad, forefathers of Abraham, not far from Baghdad. The prophecy of Ezekiel is found in the book named for him, and is included in the Old Testament.

St Demetrius of Rostov (October 28 and September 21) explains to believers the following concepts in the book of the Prophet Ezekiel: if a righteous man turns from righteousness to sin, he shall die for his sin, and his righteouness will not be remembered. If a sinner repents, and keeps God’s commandments, he will not die. His former sins will not be held against him, beause now he follows the path of righteousness (Ez. 3:20; 18:21-24).

Troparion of the Sunday, tone 4

When the women disciples of the Lord learned from the angel / the joyous message of Thy resurrection, / they cast away the ancestral curse / and elatedly told the Apostles: / Death is overthrown! / Christ God is risen, / granting the world great mercy!

Troparion of the prophet, tone 2

The memory of Your prophet Ezekiel, / We celebrate today, O Lord. / By his prayers, we beseech You, / O Christ God, save our souls!

Kontakion of the prophet, tone 4

Thou hast been shown to be a prophet of God,/ O wondrous Ezekiel,/ and hast proclaimed unto all the incarnation of the Lord,/ the Lamb and Creator,// the Son of God Who hath revealed Himself forever.

Kontakion of the Sunday, tone 4

My Savior and Redeemer as God rose from the tomb and delivered the earthborn from their chains. He has shattered the gates of hell, and as Master, He has risen on the third day!

1
Brethren, my heart’s desire and prayer to God for Israel is that they may be saved.
2
For I bear them witness that they have a zeal for God, but not according to knowledge.
3
For they being ignorant of God’s righteousness, and seeking to establish their own righteousness, have not submitted to the righteousness of God.
4
For Christ is the end of the law for righteousness to everyone who believes.
5
For Moses writes about the righteousness which is of the law, “The man who does those things shall live by them.”
6
But the righteousness of faith speaks in this way, “Do not say in your heart, ‘Who will ascend into heaven?’ (that is, to bring Christ down from above)
7
or, ‘Who will descend into the abyss?’” (that is, to bring Christ up from the dead).
8
But what does it say? “The word is near you, in your mouth and in your heart” (that is, the word of faith which we preach):
9
that if you confess with your mouth the Lord Jesus and believe in your heart that God has raised Him from the dead, you will be saved.
10
For with the heart one believes unto righteousness, and with the mouth confession is made unto salvation.

28
When He had come to the other side, to the country of the Gergesenes, there met Him two demon-possessed men, coming out of the tombs, exceedingly fierce, so that no one could pass that way.
29
And suddenly they cried out, saying, “What have we to do with You, Jesus, You Son of God? Have You come here to torment us before the time?”
30
Now a good way off from them there was a herd of many swine feeding.
31
So the demons begged Him, saying, “If You cast us out, permit us to go away into the herd of swine.”
32
And He said to them, “Go.” So when they had come out, they went into the herd of swine. And suddenly the whole herd of swine ran violently down the steep place into the sea, and perished in the water.
33
Then those who kept them fled; and they went away into the city and told everything, including what had happened to the demon-possessed men.
34
And behold, the whole city came out to meet Jesus. And when they saw Him, they begged Him to depart from their region.
1
So He got into a boat, crossed over, and came to His own city.