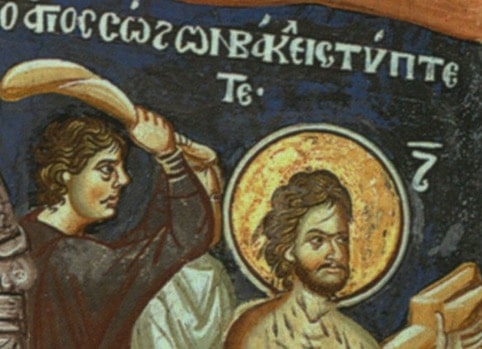 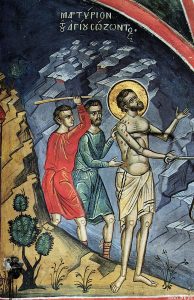 The Martyr Sozon, a native of Lykaonia, was a shepherd. He read the Holy Scriptures attentively, and he loved to share his knowledge about the One God with the shepherds who gathered together with him. He brought many to the faith in Christ and to Baptism.

One night, as he sat under an oak tree, he had a vision foretelling his martyrdom for Christ. He went to the city of Cilician Pompeiopolis, where a festal pagan celebration was being prepared for a golden idol, standing in a pagan temple.

Unseen by anyone, Saint Sozon went into the pagan temple and broke off the idol’s hand, then he smashed it and gave the gold to the poor. The missing hand of the idol caused an uproar and commotion in the city. Many were under suspicion, and were subjected to interrogation and torture.

Not wanting to be the cause of suffering for other people, Saint Sozon went to the emperor Maximian (284-305) and declared that it was he who broke the hand of the idol.

“I did this,” he said, “so that you might see the lack of power of your god, which offered me no resistance. It is not a god, but a deaf and dumb idol. I wanted to smash it all into pieces, so that people would no longer worship the work of men’s hands.”

The emperor in a fitful rage commanded that Saint Sozon be tortured mercilessly. They hung him up and struck him with iron claws, and then they put iron boots in which there were nails on his feet and took him through the city.

After this they again suspended him and beat him with iron rods until his bones broke. In these terrible torments Saint Sozon gave up his spirit to God. By decree of the emperor, slaves lit a fire to burn the body of the martyr, but suddenly lightning flashed, it thundered loudly, and rain poured down over the fire.

Christians took the body of the martyr by night and buried it. By his grave and at the place where he had the vision, many of the sick were healed. A church was built later in memory of the sufferings of the holy martyr.

Troparion for the Forefeast of the Nativity of the Theotokos, tone 4

Today from the stem of Jesse and from the loins of David, the handmaid of God Mary is being born for us. Therefore all creation is renewed and rejoices! Heaven and earth rejoice together. /Praise her, you families of nations, for Joachim rejoices and Anna celebrates crying out: “The barren one gives birth to the Theotokos, the Nourisher of our life!”

Let us gather today and together sing to Sozon, the true and divinely wise martyr, an expert fighter for the faith, the mystical seer of divine grace, a generous provider of healing, who prays to Christ God for us all.

Kontakion for the Forefeast of the Nativity of the Theotokos, tone 3

Today the Virgin Theotokos Mary the bridal chamber of the Heavenly Bridegroom by the will of God is born of a barren woman, being prepared as the chariot of God the Word. She was fore-ordained for this, since she is the divine gate and the true Mother of Life.

14
that we should no longer be children, tossed to and fro and carried about with every wind of doctrine, by the trickery of men, in the cunning craftiness of deceitful plotting,
15
but, speaking the truth in love, may grow up in all things into Him who is the head – Christ –
16
from whom the whole body, joined and knit together by what every joint supplies, according to the effective working by which every part does its share, causes growth of the body for the edifying of itself in love.
17
This I say, therefore, and testify in the Lord, that you should no longer walk as the rest of the Gentiles walk, in the futility of their mind,
18
having their understanding darkened, being alienated from the life of God, because of the ignorance that is in them, because of the blindness of their heart;
19
who, being past feeling, have given themselves over to lewdness, to work all uncleanness with greediness.

16
So He came to Nazareth, where He had been brought up. And as His custom was, He went into the synagogue on the Sabbath day, and stood up to read.
17
And He was handed the book of the prophet Isaiah. And when He had opened the book, He found the place where it was written:
18
“The Spirit of the LORD is upon Me, because He has anointed Me to preach the gospel to the poor; He has sent Me to heal the brokenhearted, to proclaim liberty to the captives and recovery of sight to the blind, to set at liberty those who are oppressed;
19
to proclaim the acceptable year of the LORD.”
20
Then He closed the book, and gave it back to the attendant and sat down. And the eyes of all who were in the synagogue were fixed on Him.
21
And He began to say to them, “Today this Scripture is fulfilled in your hearing.”
22
So all bore witness to Him, and marveled at the gracious words which proceeded out of His mouth. And they said, “Is this not Joseph’s son?”