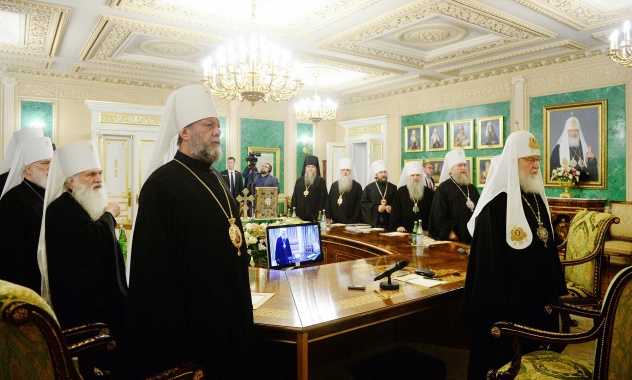 On 14 September 2018, at the Patriarchal and Synodal residence in St. Daniel’s Monastery in Moscow, the Holy Synod of the Russian Orthodox Church held an extraordinary session.

Here are the official minutes of the meeting:

Summoned for the winter session (September-February) are Metropolitan Luka of Zaporozhye and Melitopol, Metropolitan Sergy of Barnaul and Altai, Bishop Lazar of Narva and Prichudye, Bishop Veniamin of Rybinsk and Danilov, and Bishop Nikolai of Nakhodka and Preobrazheniye.

DELIBERATED over retaliatory measures after the appointment by the Patriarchate of Constantinople of its “exarchs” to Kiev following up the decision of this Church’s Synod “to grant autocephalous status to the Orthodox Church in Ukraine.”

In its statement of 8 September 2018, the Holy Synod of the Russian Orthodox Church expressed its resolute protest against the uncanonical appointment of Archbishop Daniel of Pamphilon and Bishop Ilarion of Edmonton as “exarchs” of the Patriarchate of Constantinople in Kiev, and stated that the retaliatory measures would be taken in the nearest future.

DELIBERATED over lifting up prayers for the unity of the Holy Orthodoxy in all churches of the Russian Orthodox Church.

To include the following prayers in the Litany of Fervent Supplication during every Divine Liturgy celebrated in every church of the Russian Orthodox Church: