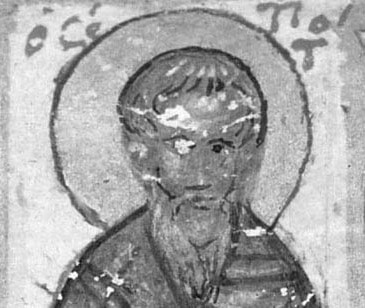 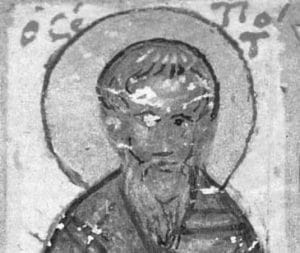 Saint Titus the Wonderworker displayed zeal for the monastic life from his youth. He pursued asceticism in the ninth century at the Studion monastery near Constantinople. By his deeds of fasting, purity of life and mild disposition, Saint Titus gained the love of the brethren, and at their request he was ordained priest.

Fervent of faith, the saint stood up for the Orthodox veneration of icons during the Iconoclast persecution. Because of his virtuous life, God granted him the gift of wonderworking. The saint was translated to the Lord in his old age.

Dedicated to the Lord from childhood, / you lived in the world like an angel; / you received grace from God to work miracles; / you were a guide of monks and a wise steward, O Titus. / Fervently pray to Christ our God for the world.

You forsook the tumult of life; / you lived your life in tranquility, O wise one. / You have passed over to God, / venerable wonderworker, Titus our father.

17
Thus says the Lord, your Redeemer, the Holy One of Israel: “I am the Lord your God, Who teaches you to profit, Who leads you by the way you should go.
18
Oh, that you had heeded My commandments! Then your peace would have been like a river, and your righteousness like the waves of the sea.
19
Your descendants also would have been like the sand, and the offspring of your body like the grains of sand; his name would not have been cut off nor destroyed from before Me.”
20
Go forth from Babylon! Flee from the Chaldeans! With a voice of singing, declare, proclaim this, utter it to the end of the earth; say, “The Lord has redeemed His servant, Jacob!”
21
And they did not thirst when He led them through the deserts; He caused the waters to flow from the rock for them; He also split the rock, and the waters gushed out.
22
“There is no peace,” says the Lord, “for the wicked.”
1
“Listen, O coastlands, to me, and take heed, you peoples from afar! The Lord has called me from the womb; from the matrix of my mother he has made mention of my name.
2
And He has made my mouth like a sharp sword; in the shadow of His hand He has hidden me, and made me a polished shaft; in His quiver He has hidden me.”
3
“And He said to me, ‘You are My servant, O Israel, in whom I will be glorified.’
4
Then I said, ‘I have labored in vain, I have spent my strength for nothing and in vain; yet surely my just reward is with the Lord, and my work with my God.’”

16
He who keeps the commandment keeps his soul, but he who is careless of his ways will die.
17
He who has pity on the poor lends to the Lord, and He will pay back what he has given.
18
Chasten your son while there is hope, and do not set your heart on his destruction.
19
A man of great wrath will suffer punishment; for if you rescue him, you will have to do it again.
20
Listen to counsel and receive instruction, that you may be wise in your latter days.
21
There are many plans in a man’s heart, nevertheless the Lord’s counsel – that will stand.
22
What is desired in a man is kindness, and a poor man is better than a liar.
23
The fear of the Lord leads to life, and he who has it will abide in satisfaction; he will not be visited with evil.
24
A lazy man buries his hand in the bowl, and will not so much as bring it to his mouth again.
25
Strike a scoffer, and the simple will become wary; rebuke one who has understanding, and he will discern knowledge.