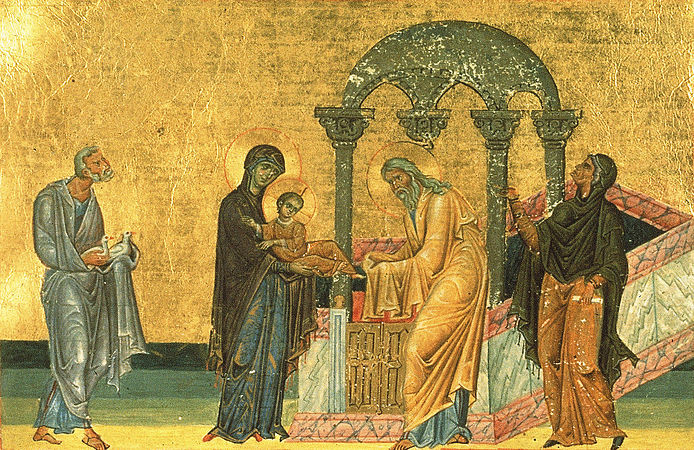 The Meeting of our Lord and Savior, Jesus Christ, in the Temple 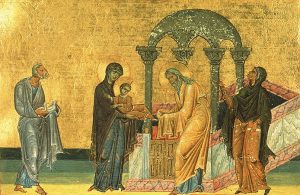 Today the Church commemorates an important event in the earthly life of our Lord Jesus Christ (Luke 2:22-40). Forty days after His birth the God-Infant was taken to the Jerusalem Temple, the center of the nation’s religious life. According to the Law of Moses (Lev. 12:2-8), a woman who gave birth to a male child was forbidden to enter the Temple of God for forty days. At the end of this time the mother came to the Temple with the child, to offer a young lamb or pigeon to the Lord as a purification sacrifice. The Most Holy Virgin, the Mother of God, had no need of purification, since she had given birth to the Source of purity and sanctity without defilement. However, she humbly fulfilled the requirements of the Law.

At this time the righteous Elder Simeon (February 3) was living in Jerusalem. It had been revealed to him that he would not die until he should behold the promised Messiah. By inspiration from above, Saint Simeon went to the Temple at the very moment when the Most Holy Theotokos and Saint Joseph had brought the Infant Jesus to fulfill the Law.

The God-Receiver Simeon took the divine Child in his arms, and giving thanks to God, he spoke the words repeated by the Church each evening at Vespers: “Lord, now lettest Thou Thy servant depart in peace, according to Thy word, for mine eyes have seen Thy salvation, which Thou hast prepared before the face of all people, a light to enlighten the Gentiles, and the glory of Thy people Israel” (Luke 2:29-32). Saint Simeon said to the Most Holy Virgin: “Behold, this child is set for the fall and rising again of many in Israel, and for a sign which shall be spoken against. Yea, a sword shall pierce through your own soul also, that the thoughts of many hearts may be revealed” (Luke 2:34-35).

At the Temple was the 84-year-old widow Anna the Prophetess, daughter of Phanuel (February 3), “who did not leave the temple, but served God with fasting and prayers night and day. She arrived just when Saint Simeon met the divine Child. She also gave thanks to the Lord and spoke of Him to all those who were looking for redemption in Jerusalem” (Luke 2:37-38). In the icon of the Feast she holds a scroll which reads: “This Child has established Heaven and earth.”

Before Christ was born, righteous men and women lived by faith in the promised Messiah, and awaited His coming. The Righteous Simeon and the Prophetess Anna, the last righteous people of the Old Testament, were deemed worthy to meet the Savior in the Temple.

The Feast of the Meeting of the Lord is among the most ancient feasts of the Christian Church. We have sermons on the Feast by the holy bishops Methodius of Patara (+ 312), Cyril of Jerusalem (+ 360), Gregory the Theologian (+ 389), Amphilocius of Iconium (+ 394), Gregory of Nyssa (+ 400), and John Chrysostom (+ 407). Despite its early origin, this Feast was not celebrated so splendidly until the sixth century.

In 528, during the reign of Justinian, an earthquake killed many people in Antioch. Other misfortunes followed this one. In 541 a terrible plague broke out in Constantinople, carrying off several thousand people each day. During this time of widespread suffering, a solemn prayer service (Litia) for deliverence from evils was celebrated on the Feast of the Meeting of the Lord, and the plague ceased. In thanksgiving to God, the Church established a more solemn celebration of this Feast.

Church hymnographers have adorned this Feast with their hymns: Saint Andrew of Crete in the seventh century; Saint Cosmas Bishop of Maium, Saint John of Damascus, and Saint Germanus Patriarch of Constantinople in the eighth century; and Saint Joseph, Archbishop of Thessalonica in the ninth century.

On this day we also commemorate the icon of the Most Holy Theotokos known as “the Softening of Evil Hearts” or “Simeon’s Prophecy.” The Mother of God is depicted without Her Child, with seven swords piercing her breast: three from the left side, three from the right, and one from below.

A similar icon, “Of the Seven Swords” (August 13) shows three swords on the left side and four from the right.

The icon “Simeon’s Prophecy” symbolizes the fulfillment of the prophecy of the righteous Elder Simeon: “a sword shall pierce through your own soul” (Luke 2:35).

7
Now beyond all contradiction the lesser is blessed by the better.
8
Here mortal men receive tithes, but there he receives them, of whom it is witnessed that he lives.
9
Even Levi, who receives tithes, paid tithes through Abraham, so to speak,
10
for he was still in the loins of his father when Melchizedek met him.
11
Therefore, if perfection were through the Levitical priesthood (for under it the people received the law), what further need was there that another priest should rise according to the order of Melchizedek, and not be called according to the order of Aaron
12
For the priesthood being changed, of necessity there is also a change of the law.
13
For He of whom these things are spoken belongs to another tribe, from which no man has officiated at the altar.
14
For it is evident that our Lord arose from Judah, of which tribe Moses spoke nothing concerning priesthood.
15
And it is yet far more evident if, in the likeness of Melchizedek, there arises another priest
16
who has come, not according to the law of a fleshly commandment, but according to the power of an endless life.
17
For He testifies: “You are a priest forever according to the order of Melchizedek.”

22
Now when the days of her purification according to the law of Moses were completed, they brought Him to Jerusalem to present Him to the Lord
23
(as it is written in the law of the Lord, “Every male who opens the womb shall be called holy to the LORD”),
24
and to offer a sacrifice according to what is said in the law of the Lord, “A pair of turtledoves or two young pigeons.”
25
And behold, there was a man in Jerusalem whose name was Simeon, and this man was just and devout, waiting for the Consolation of Israel, and the Holy Spirit was upon him.
26
And it had been revealed to him by the Holy Spirit that he would not see death before he had seen the Lord’s Christ.
27
So he came by the Spirit into the temple. And when the parents brought in the Child Jesus, to do for Him according to the custom of the law,
28
he took Him up in his arms and blessed God and said:
29
“Lord, now You are letting Your servant depart in peace, according to Your word;
30
for my eyes have seen Your salvation
31
which You have prepared before the face of all peoples,
32
a light to bring revelation to the Gentiles, and the glory of Your people Israel.”
33
And Joseph and His mother marveled at those things which were spoken of Him.
34
Then Simeon blessed them, and said to Mary His mother, “Behold, this Child is destined for the fall and rising of many in Israel, and for a sign which will be spoken against
35
(yes, a sword will pierce through your own soul also), that the thoughts of many hearts may be revealed.”
36
Now there was one, Anna, a prophetess, the daughter of Phanuel, of the tribe of Asher. She was of a great age, and had lived with a husband seven years from her virginity;
37
and this woman was a widow of about eighty-four years, who did not depart from the temple, but served God with fastings and prayers night and day.
38
And coming in that instant she gave thanks to the Lord, and spoke of Him to all those who looked for redemption in Jerusalem.
39
So when they had performed all things according to the law of the Lord, they returned to Galilee, to their own city, Nazareth.
40
And the Child grew and became strong in spirit, filled with wisdom; and the grace of God was upon Him.