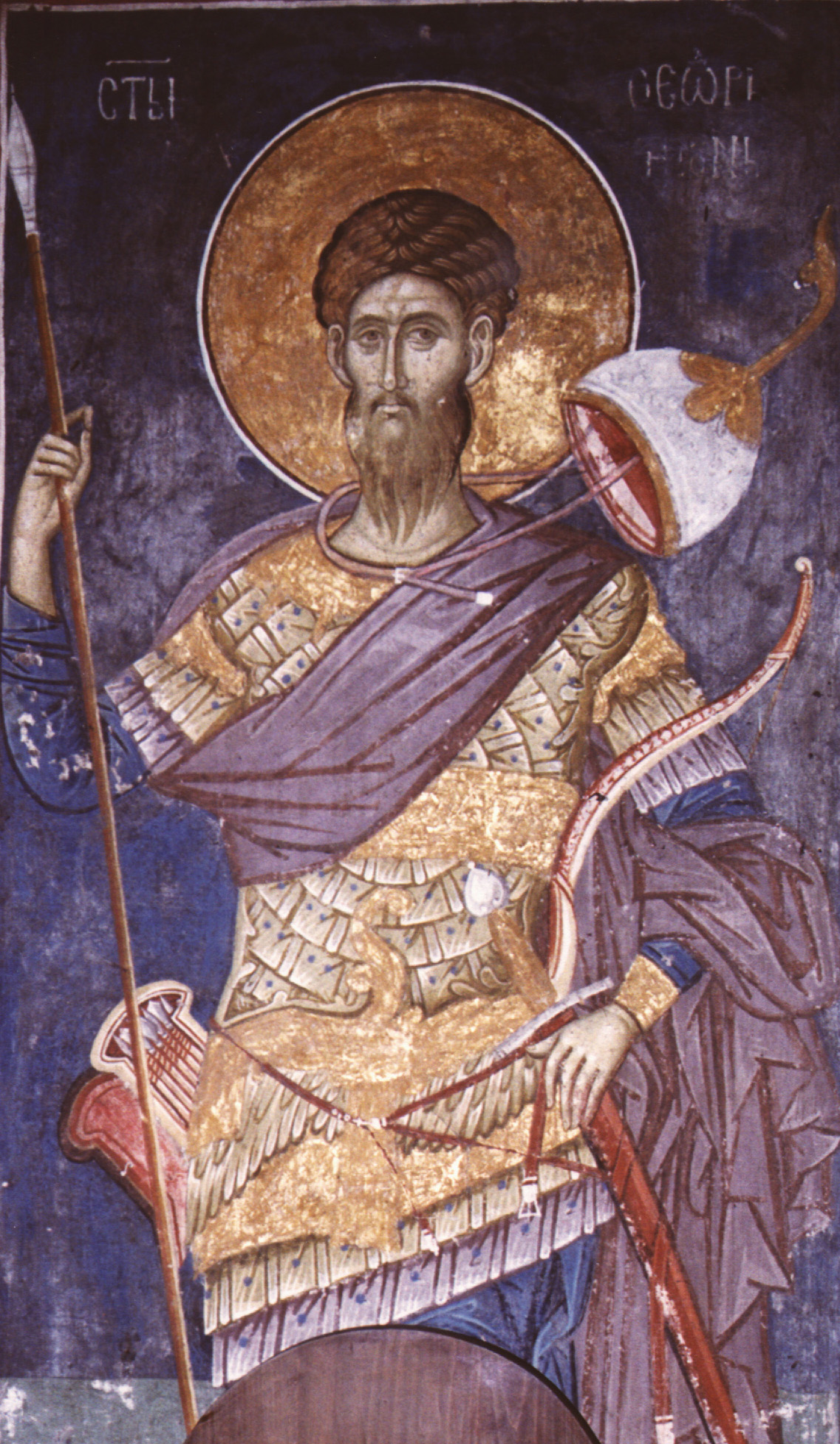 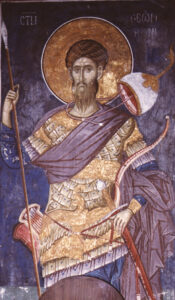 The Great Martyr Theodore Stratelates came from the city of Euchaita in Asia Minor. He was endowed with many talents, and was handsome in appearance. For his charity God enlightened him with the knowledge of Christian truth. The bravery of the saintly soldier was revealed after he, with the help of God, killed a giant serpent living on a precipice in the outskirts of Euchaita. The serpent had devoured many people and animals, terrorizing the countryside. Saint Theodore armed himself with a sword and vanquished it, glorifying the name of Christ among the people.

For his bravery Saint Theodore was appointed military commander [stratelatos] in the city of Heraclea, where he combined his military service with preaching the Gospel among the pagans subject to him. His gift of persuasion, reinforced by his personal example of Christian life, turned many from their false gods. Soon, nearly all of Heraclea had accepted Christianity.

During this time the emperor Licinius (311-324) began a fierce persecution against Christians. In an effort to stamp out the new faith, he persecuted the enlightened adherents of Christianity, who were perceived as a threat to paganism. Among these was Saint Theodore. Licinius tried to force Saint Theodore to offer sacrifice to the pagan gods. The saint invited Licinius to come to him with his idols so both of them could offer sacrifice before the people.

Blinded by his hatred for Christianity, Licinius trusted the words of the saint, but he was disappointed. Saint Theodore smashed the gold and silver statues into pieces, which he then distributed to the poor. Thus he demonstrated the vain faith in soulless idols, and also displayed Christian charity.

Saint Theodore was arrested and subjected to fierce and refined torture. He was dragged on the ground, beaten with iron rods, had his body pierced with sharp spikes, was burned with fire, and his eyes were plucked out. Finally, he was crucified. Varus, the servant of Saint Theodore, barely had the strength to write down the incredible torments of his master.

God, however, in His great mercy, willed that the death of Saint Theodore should be as fruitful for those near him as his life was. An angel healed the saint’s wounded body and took him down from the cross. In the morning, the imperial soldiers found him alive and unharmed. Seeing with their own eyes the infinite might of the Christian God, they were baptized not far from the place of the unsuccessful execution.

Thus Saint Theodore became “like a day of splendor” for those pagans dwelling in the darkness of idolatary, and he enlightened their souls “with the bright rays of his suffering.” Unwilling to escape martyrdom for Christ, Saint Theodore voluntarily surrendered himself to Licinius, and discouraged the Christians from rising up against the torturer, saying, “Beloved, halt! My Lord Jesus Christ, hanging upon the Cross, restrained the angels and did not permit them to take revenge on the race of man.”

Going to execution, the holy martyr opened up the prison doors with just a word and freed the prisoners from their bonds. People who touched his robe were healed instantly from sicknesses, and freed from demonic possession. By order of the emperor, Saint Theodore was beheaded by the sword. Before his death he told Varus, “ Do not fail to record the day of my death, and bury my body in Euchaita.” He also asked to be remembered each year on this date. Then he bent his neck beneath the sword, and received the crown of martyrdom which he had sought. This occurred on February 8, 319, on a Saturday, at the third hour of the day.

Saint Theodore is regarded as the patron saint of soldiers. He is also commemorated on June 8.

Troparion of the Afterfeast, tone 1

Truly enlisted with the King of Heaven, / you became an outstanding general for Him, passion-bearer Theodore; / you armed yourself wisely with the weapons of faith / and conquered hordes of demons, revealing yourself as a victorious athlete. / Therefore, in faith we always call you blessed.

With the word of God as a spear in your hand, / in courage of soul and armed with faith, / you vanquished the enemy, Theodore, glory of martyrs, / with whom you unceasingly pray to Christ God for us all.

Kontakion of the Afterfeast, tone 1

8
If we say that we have no sin, we deceive ourselves, and the truth is not in us.
9
If we confess our sins, He is faithful and just to forgive us our sins and to cleanse us from all unrighteousness.
10
If we say that we have not sinned, we make Him a liar, and His word is not in us.
1
My little children, these things I write to you, so that you may not sin. And if anyone sins, we have an Advocate with the Father, Jesus Christ the righteous.
2
And He Himself is the propitiation for our sins, and not for ours only but also for the whole world.
3
Now by this we know that we know Him, if we keep His commandments.
4
He who says, “I know Him,” and does not keep His commandments, is a liar, and the truth is not in him.
5
But whoever keeps His word, truly the love of God is perfected in him. By this we know that we are in Him.
6
He who says he abides in Him ought himself also to walk just as He walked.

31
Heaven and earth will pass away, but My words will by no means pass away.
32
But of that day and hour no one knows, not even the angels in heaven, nor the Son, but only the Father.
33
Take heed, watch and pray; for you do not know when the time is.
34
It is like a man going to a far country, who left his house and gave authority to his servants, and to each his work, and commanded the doorkeeper to watch.
35
Watch therefore, for you do not know when the master of the house is coming – in the evening, at midnight, at the crowing of the rooster, or in the morning –
36
lest, coming suddenly, he find you sleeping.
37
And what I say to you, I say to all: Watch!”
1
After two days it was the Passover and the Feast of Unleavened Bread. And the chief priests and the scribes sought how they might take Him by trickery and put Him to death.
2
But they said, “Not during the feast, lest there be an uproar of the people.”