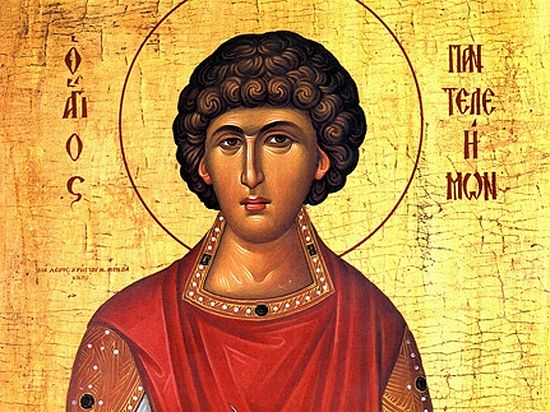 Holy Greatmartyr and Healer Panteleimon (305). . Bl. Nikolai Kochanov, Fool-for-Christ, at Novgorod (1392). Ven. Anthusa, Abbess of Mantinea in Asia Minor, and her 90 sisters (8th c.). Holy Equal-to-the-Apostles Clement, Bishop of Ochrid and Enlightener of the Bulgarians (916), and with him Ss. Angelar, Horasdus (Gorazd), Nahum, and Sabbas, disciples of Ss. Cyril and Methodius. 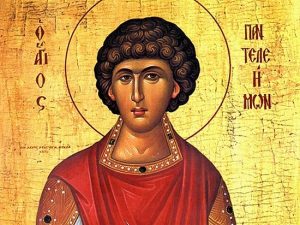 The Great Martyr and Healer Panteleimon was born in the city of Nicomedia into the family of the illustrious pagan Eustorgius, and he was named Pantoleon. His mother Saint Euboula (March 30) was a Christian. She wanted to raise her son in the Christian Faith, but she died when the future martyr was just a young child. His father sent Pantoleon to a pagan school, after which the young man studied medicine at Nicomedia under the renowned physician Euphrosynus. Pantoleon came to the attention of the emperor Maximian (284-305), who wished to appoint him as royal physician when he finished his schooling.

The hieromartyrs Hermolaus, Hermippus and Hermocrates, survivors of the massacre of 20,000 Christians in 303 (December 28), were living secretly in Nicomedia at that time. Saint Hermolaus saw Pantoleon time and again when he came to the house where they were hiding. Once, the priest invited the youth to the house and spoke about the Christian Faith. After this Pantoleon visited Saint Hermolaus every day.

One day the saint found a dead child on the street. He had been bitten by a great snake, which was still beside the child’s body. Pantoleon began to pray to the Lord Jesus Christ to revive the dead child and to destroy the venomous reptile. He firmly resolved that if his prayer were fulfilled, he would become a follower of Christ and receive Baptism. The child rose up alive, and the snake died before Pantoleon’s eyes.

After this miracle, Pantoleon was baptized by Saint Hermolaus with the name Panteleimon (meaning “all-merciful”). Speaking with Eustorgius, Saint Panteleimon prepared him to accept Christianity. When the father saw how his son healed a blind man by invoking Jesus Christ, he then believed in Christ and was baptized by Saint Hermolaus together with the man whose sight was restored.

After the death of his father, Saint Panteleimon dedicated his life to the suffering, the sick, the unfortunate and the needy. He treated all those who turned to him without charge, healing them in the name of Jesus Christ. He visited those held captive in prison. These were usually Christians, and he healed them of their wounds. In a short time, reports of the charitable physician spread throughout the city. Forsaking the other doctors, the inhabitants began to turn only to Saint Panteleimon.

The envious doctors told the emperor that Saint Panteleimon was healing Christian prisoners. Maximian urged the saint to refute the charge by offering sacrifice to idols. Saint Panteleimon confessed himself a Christian, and suggested that a sick person, for whom the doctors held out no hope, should be brought before the emperor. Then the doctors could invoke their gods, and Panteleimon would pray to his God to heal the man. A man paralyzed for many years was brought in, and pagan priests who knew the art of medicine invoked their gods without success. Then, before the very eyes of the emperor, the saint healed the paralytic by calling on the name of Jesus Christ. The ferocious Maximian executed the healed man, and gave Saint Panteleimon over to fierce torture.

The Lord appeared to the saint and strengthened him before his sufferings. They suspended the Great Martyr Panteleimon from a tree and scraped him with iron hooks, burned him with fire and then stretched him on the rack, threw him into a cauldron of boiling tar, and cast him into the sea with a stone around his neck. Throughout these tortures the martyr remained unhurt, and denounced the emperor.

At this time the priests Hermolaus, Hermippus and Hermocrates were brought before the court of the pagans. All three confessed their faith in the Savior and were beheaded (July 26).

By order of the emperor they brought the Great Martyr Panteleimon to the circus to be devoured by wild beasts. The animals, however, came up to him and licked his feet. The spectators began to shout, “Great is the God of the Christians!” The enraged Maximian ordered the soldiers to stab with the sword anyone who glorified Christ, and to cut off the head of the Great Martyr Panteleimon.

They led the saint to the place of execution and tied him to an olive tree. While the martyr prayed, one of the soldiers struck him with a sword, but the sword became soft like wax and inflicted no wound. The saint completed his prayer, and a Voice was heard from Heaven, calling the passion-bearer by his new name and summoning him to the heavenly Kingdom.

Hearing the Voice, the soldiers fell down on their knees before the holy martyr and begged forgiveness. They refused to continue with the execution, but Saint Panteleimon told them to fulfill the emperor’s command, because otherwise they would have no share with him in the future life. The soldiers tearfully took their leave of the saint with a kiss.

When the saint was beheaded, the olive tree to which the saint was tied became covered with fruit. Many who were present at the execution believed in Christ. The saint’s body was thrown into a fire, but remained unharmed, and was buried by Christians. Saint Panteleimon’s servants Laurence, Bassos and Probus witnessed his execution and heard the Voice from Heaven. They recorded the life, the sufferings and death of the saint.

Portions of the holy relics of the Great Martyr Panteleimon were distributed throughout all the Christian world. His venerable head is now located at the Russian monastery of Saint Panteleimon on Mt. Athos.

The veneration of the holy martyr in the Russian Orthodox Church was already known in the twelfth century. Prince Izyaslav (in Baptism, Panteleimon), the son of Saint Mstislav the Great, had an image of Saint Panteleimon on his helmet. Through the intercession of the saint he remained alive during a battle in the year 1151. On the Feast of the Great Martyr Panteleimon, Russian forces won two naval victories over the Swedes (in 1714 near Hanhauze and in 1720 near Grenham).

Saint Panteleimon is venerated in the Orthodox Church as a mighty saint, and the protector of soldiers. This aspect of his veneration is derived from his first name Pantoleon, which means “a lion in everything”. His second name, Panteleimon, given him at Baptism, which means “all-merciful”, is manifest in the veneration of the martyr as a healer. The connection between these two aspects of the saint is readily apparent in that soldiers, receiving wounds more frequently than others, are more in need of a physician-healer. Christians waging spiritual warfare also have recourse to this saint, asking him to heal their spiritual wounds.

The holy Great Martyr and Healer Panteleimon is invoked in the Mystery of Anointing the Sick, at the Blessing of Water, and in the Prayers for the Sick.

Holy Passion-bearer and healer Panteleimon, / entreat the merciful God, / to grant our souls forgiveness of transgressions.

You emulated the Merciful One, / and received from Him the grace of healing, / Passion-bearer and healer Panteleimon; / by your prayers, heal our spiritual diseases / and continually drive away the temptations of the enemy / from those who cry out in faith “Save us, O Lord.”

1
I tell the truth in Christ, I am not lying, my conscience also bearing me witness in the Holy Spirit,
2
that I have great sorrow and continual grief in my heart.
3
For I could wish that I myself were accursed from Christ for my brethren, my countrymen according to the flesh,
4
who are Israelites, to whom pertain the adoption, the glory, the covenants, the giving of the law, the service of God, and the promises;
5
of whom are the fathers and from whom, according to the flesh, Christ came, who is over all, the eternally blessed God. Amen.

18
While He spoke these things to them, behold, a ruler came and worshiped Him, saying, “My daughter has just died, but come and lay Your hand on her and she will live.”
19
So Jesus arose and followed him, and so did His disciples.
20
And suddenly, a woman who had a flow of blood for twelve years came from behind and touched the hem of His garment.
21
For she said to herself, “If only I may touch His garment, I shall be made well.”
22
But Jesus turned around, and when He saw her He said, “Be of good cheer, daughter; your faith has made you well.” And the woman was made well from that hour.
23
When Jesus came into the ruler’s house, and saw the flute players and the noisy crowd wailing,
24
He said to them, “Make room, for the girl is not dead, but sleeping.” And they ridiculed Him.
25
But when the crowd was put outside, He went in and took her by the hand, and the girl arose.
26
And the report of this went out into all that land.