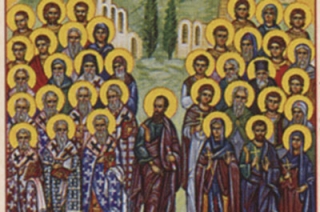 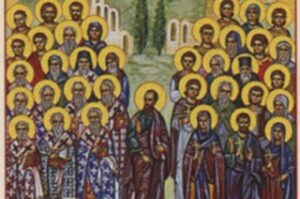 The Holy Martyrs Peter, Dionysius, Andrew, Paul, and Christina suffered under emperor Decius (249-251). Peter suffered in the city of Lampsaka. Brought to trial before the prefect Optimines, he bravely confessed his faith in Christ. They tried to force the youth to deny the Lord and worship the goddess Venus. The martyr refused to do this, declaring for everyone to hear, that a Christian would not bow to the idol of a lecherous woman.

St Peter was subjected to fierce tortures, but he endured them with courage, giving thanks to the Lord Jesus Christ for giving him His all-powerful help. Then he was beheaded.

Your martyrs, O Lord, for their sufferings / Have received incorruptible crowns from You, our God. / For strengthened by Your might, / They overthrew tyrants and destroyed the powerless boldness of demons. / Through their supplications save our souls.

Suffering martyrdom worthily / With those who suffered with you, O Theodotus, / You received crowns of honor with holy virgin martyrs. / Therefore entreat Christ God unceasingly in behalf of us all.

20
Immediately he preached the Christ in the synagogues, that He is the Son of God.
21
Then all who heard were amazed, and said, “Is this not he who destroyed those who called on this name in Jerusalem, and has come here for that purpose, so that he might bring them bound to the chief priests?”
22
But Saul increased all the more in strength, and confounded the Jews who dwelt in Damascus, proving that this Jesus is the Christ.
23
Now after many days were past, the Jews plotted to kill him.
24
But their plot became known to Saul. And they watched the gates day and night, to kill him.
25
Then the disciples took him by night and let him down through the wall in a large basket.
26
And when Saul had come to Jerusalem, he tried to join the disciples; but they were all afraid of him, and did not believe that he was a disciple.
27
But Barnabas took him and brought him to the apostles. And he declared to them how he had seen the Lord on the road, and that He had spoken to him, and how he had preached boldly at Damascus in the name of Jesus.
28
So he was with them at Jerusalem, coming in and going out.
29
And he spoke boldly in the name of the Lord Jesus and disputed against the Hellenists, but they attempted to kill him.
30
When the brethren found out, they brought him down to Caesarea and sent him out to Tarsus.
31
Then the churches throughout all Judea, Galilee, and Samaria had peace and were edified. And walking in the fear of the Lord and in the comfort of the Holy Spirit, they were multiplied.

17
These things I command you, that you love one another.
18
If the world hates you, you know that it hated Me before it hated you.
19
If you were of the world, the world would love its own. Yet because you are not of the world, but I chose you out of the world, therefore the world hates you.
20
Remember the word that I said to you, ‘A servant is not greater than his master.’ If they persecuted Me, they will also persecute you. If they kept My word, they will keep yours also.
21
But all these things they will do to you for My name’s sake, because they do not know Him who sent Me.
22
If I had not come and spoken to them, they would have no sin, but now they have no excuse for their sin.
23
He who hates Me hates My Father also.
24
If I had not done among them the works which no one else did, they would have no sin; but now they have seen and also hated both Me and My Father.
25
But this happened that the word might be fulfilled which is written in their law, ‘They hated Me without a cause.’
26
But when the Helper comes, whom I shall send to you from the Father, the Spirit of truth who proceeds from the Father, He will testify of Me.
27
And you also will bear witness, because you have been with Me from the beginning.
1
These things I have spoken to you, that you should not be made to stumble.
2
They will put you out of the synagogues; yes, the time is coming that whoever kills you will think that he offers God service.