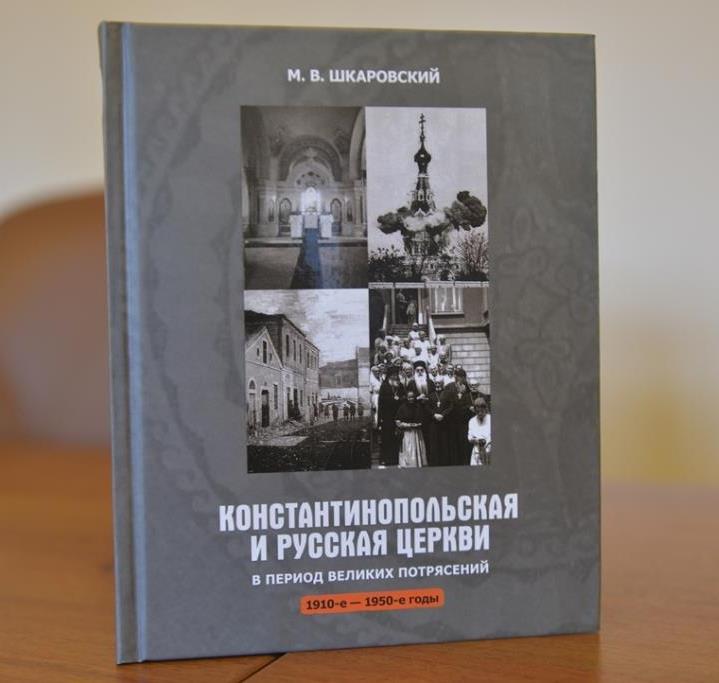 The summary contains comments made by Metropolitan Hilarion of Volokolamsk and other participants.

Metropolitan Hilarion, the President of the DECR and Rector of the Sts. Cyril and Methodius Institute of Post-Graduate Studies, addressed those present:

“I warmly welcome all of you who have come for the presentation of Mikhail Shkarovski’s book,”The Constantinople and Russian Churches at the time of the great upheavals (1910-1950)“.

I will make a few remarks before his presentation. Mikhail Shkarovski’s book is focusing on one of the most difficult periods in the relations between the Russian Orthodox Church and the Constantinople Patriarchate. The fall of the Russian Empire and the establishment of an atheist regime in the country placed our Church in completely new conditions during the first half of the 20th century. It was a time of hardship. Many bishops, clergy, and faithful were subjected to cruel persecution. The Church was torn apart by internal divisions and schisms supported by Soviet authority. A large number of parishes and dioceses of the Russian Church suddenly found themselves on the territory of other states.

The relationship between our Churches had to operate under these difficult conditions. When we study the history of this relationship, we regret to note that Constantinople has not always behaved in a fraternal way towards the Russian Church. In the 1920s-30s, the Constantinople Patriarchate openly supported the schism of the Living Church, itself initiated by the Soviet authorities. They non-canonically extended its authority to Estonia, Latvia, and Finland. They proclaimed the autocephaly of the Polish Church, which used to be formerly part of the Russian Church. There are many other examples of unfriendly and non-canonical acts of the Constantinople Patriarchate in that period, but our purpose today is not to enumerate them. For years, our Church has preferred to keep quiet about these sad past events, striving to charitably consider the errors committed by our brothers, while remembering our duty not to betray the historical truth, and to remain faithful to the holy canons.

This is how the Russian Church behaved in the 90s, when Constantinople accepted the Ukrainian schismatics of the United States and Canada in its communion, and founded a parallel structure in Estonia. In the name of peace in the Church and in order to avoid a great schism within the whole Orthodox family, we had then found it possible to preserve the canonical and liturgical communion with the Constantinople Church. We made extreme concessions and allowed for the widest economy. However, it was already clear back then, that these were not isolated acts in the context of unfriendly behavior, but rather the surreptitious development of a new ecclesiology alien to the Orthodox Tradition. In 2008, the Bishops Council of the Russian Orthodox Church warned of this threat in its decree “On the unity of the Church”.

This theme has lately acquired a particular relevance. We all know about the tragic events that recently occurred in the life of the Church in Ukraine, with the granting by Constantinople of a so-called tomos of autocephaly to two schismatic groups having merged. Defending her canonical boundaries and her unity, the Russian Orthodox Church believes it is her duty to testify that this new ecclesiological model, which grants full and exclusive powers of authority to the primate of the first local church according to the Diptychs, is not in accordance with Orthodox doctrine. The implementation of the scenario of the Ukrainian autocephaly is one of the key steps in the imposition of this model on all Orthodoxy.

I am convinced that a correct understanding of what is happening, is only possible by taking into account all aspects of the policy that the Constantinople Patriarchate has been consistently implementing these last hundred years. Mikhail Shkarovski’s book contains no gratuitous statement. It relies on facts from the past, and that’s its value. By studying the past, we better understand the present.

I hope this book will be a remarkable contribution to the reflection, not only on the history of the relations between the Russian Orthodox and the Constantinople Churches, but also on the current Ukrainian crisis and the tragic division in world Orthodoxy”.

As Mikhail Shkarovski, a professor at the St. Petersburg Center for Advanced Studies and at the Theological Academy, pointed out, the problematic of his book is extremely topical: “The years 1910-1950 mark a turning point in the history of both the Constantinople and the Russian Church, a turning point that determined their further development”.
Mr. Shkarovski then presented the main themes of his work, the problems and trends in the relations between Constantinople and the Russian Church in the 20th century.

According to Archpriest Alexander Mazyrin, a professor at St. Tikhon University and doctor in historical sciences, this book is of great importance today. “Because of the current crisis in Inter-Orthodox relations, it is very important to understand the sources of this crisis and its historical premises”, said the archpriest. “Mr. Shkarovski’s book largely expands on this issue”.

And as noted by A. Kostryukov, a research director at the St. Tikhon University’s Department of Scientific Research in the Contemporary History of the Russian Orthodox Church, the author of the book is well known: several generations of young scholars have grown up with Mr. Shkarovski’s books. Speaking of how relevant this theme is for today, he recalled the measures taken by the Constantinople Patriarchate in recent decades, measures that have been violating the canons. These challenges must be addressed not only in a polemical but also in a scientific spirit, said A. Kostriukov, stressing, “This book has not only a tactical, but also a strategic dimension. It serves the glory of our Russian Orthodox Church”.

Source in French and Russian