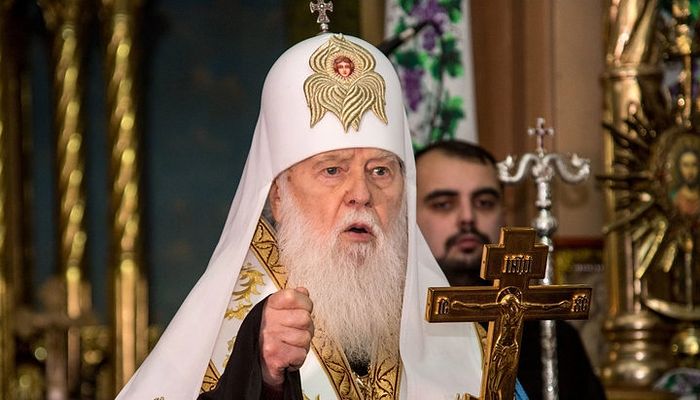 Filaret Denisenko, who has been at the head of the “Kyiv Patriarch” (KP) and the “Honorary Patriarch” of the “autocephalous Orthodox Church of Ukraine” (Constantinople Patriarchate – CP), convened a “local synod” yesterday of his so-called patriarchate, in the Saint Vladimir Cathedral, Kyiv. He had the support of three other “hierarchs” from dioceses outside of Ukraine, who left the KP to join the new autocephalous Church. These three bishops were present as well as some clergy, over 200 delegates, and about 50 guests.

The local synod came up with the following resolution, published by Strana, a Ukrainian newspaper. Let’s note especially that the synod refused the suppression of the Kyiv Patriarchate, which according to them invalidates the December 15 “unification council“, and they rejected the tomos of autocephaly granted by Constantinople to the new Church on January 6th.

Here is the summary of the resolution in ten points:

1 – The local synod rejects the liquidation of the KP decided on December 15, 2018, because it was decided only by collecting signatures at the request of Constantinople, and not by a local synod, as the statutes require. The KP not being liquidated, there can be no unification council, nor tomos of autocephaly.

Along the same line, “Metropolitan” Makariy Maletych also said that his own “Ukrainian autocephalous Orthodox Church” had not been legally dissolved. As the liquidation of these two bodies had been a condition to hold a “unification council ” according by Constantinople, even Constantinople should not easily accept the status of this “council”.

2 – The KP is legally registered with State authorities. It continues to exist and work for the good of the Ukrainian people.

This was confirmed in May by the Ukrainian Ministry of Justice.

4 – The KP shall remain the owner of all funds and property (churches, monasteries, educational institutions, etc.) transferred to it by the competent authorities. All bank accounts are also owned by the KP as a legal entity.

5 – All monasteries and parishes of the Kyiv diocese belong to the leadership of the KP, including the of St. Michael’s Golden-Domed Monastery, where “Metropolitan” Epifaniy Dumenko (new autocephalous Church – CP) currently serves. The Kyiv Theological Academy, founded by Filaret in 1992, still belongs to the KP.

6 – The KP remains the owner of all dioceses, monasteries, religious schools, brotherhoods, and missions legally registered as dependent on the KP. Entities that have been re-registered with the new autocephalous Church (CP), but would like to be part of the KP can do so. The KP also keeps all its dioceses and parishes abroad.

7 – The tomos of autocephaly granted by Constantinople on January 6th does not correspond to the statutes of the autocephalous Churches. It therefore renders the new Church (CP) dependent on the Patriarchate of Constantinople.

8 – The local synod is grateful to Patriarch Bartholomew and its Patriarchate for having tried to resolve the Ukrainian ecclesiastical issue, but is not satisfied with the contents of this tomos of autocephaly.

10 – The local synod asks all the faithful to support the KP, while some try to destroy it from the inside, which makes its enemies rejoice. “But the truth is with us, so God is with us,” the statement concludes.

The resolution was unanimously adopted by the synod, as was a letter to President Volodymyr Zelensky.
In addition, new bishops were chosen, proposed by Filaret himself: Father Andrei, treasurer of St. Theodosius Monastery, and one of the representatives of Kharkov diocese (KP). Other episcopal consecrations are planned in the months to come.
Finally, Filaret said that the KP not being recognized should not be a cause for worry. “We do not need the Church for recognition, but that it be holy and apostolic,” he declared. However, Filaret recently stated that the new autocephalous Church (CP) is uncanonical, precisely because it is not recognized by any local Church beside Constantinople.

The response of the autocephalous Orthodox Church of Ukraine (CP) was immediate: in its statement, it appealed to “Patriarch Filaret” and the participants in this local synod “to realize the devastating consequences of this meeting, and to stop undermining the unity between the Church and the Ukrainian citizens”.
At its upcoming June 24 meeting, the Holy Synod of the Ukrainian autocephalous Orthodox Church will  make appropriate decisions on this issue.

Sources in English: 1 and 2