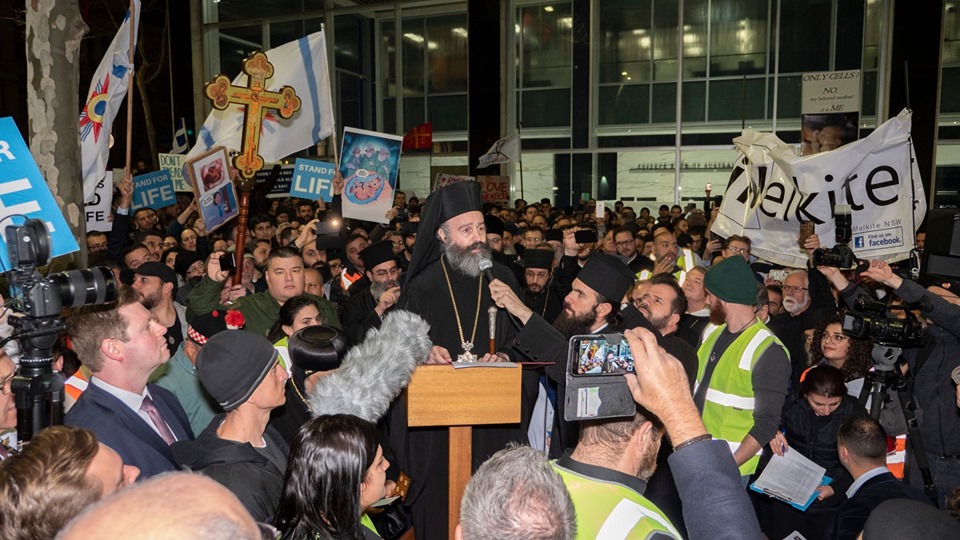 A vote on the bill, which passed the lower chamber two weeks, ago, was to be voted on in the upper house this week, though it was delayed until next month at the last minute, thanks in part to the protests of concerned Australians who are horrified at the bill’s stipulations.

The proposed bill would allow abortions for any reason up to 5 1/2 months, and up until birth with the agreement of two doctors. Doctors who morally object to abortion will also be legally bound to refer a woman seeking an abortion to another doctor, the Greek hierarch writes.

“Last night was a moment of sacred proportions in the life of the Holy Orthodox Church of Australia and that of Christianity in general. We were deeply blessed to see our shepherds on the ground and advocating for one of the most important causes to a Christian person—responding to the question of who we are as a society,” reports the Facebook page Orthodox Christianity in Australia.

A number of hierarchs and clergy from other Christian confessions were also present.

Abp. Makarios addressed the crowd, noting that Orthodox Christians of all jurisdictions were united at the event against the great sin of abortion. He began by quoting Psalm 139, which speaks of God knowing us while yet in our mother’s womb, and declared that “No law should take away a child’s right to life, let alone take it away in such a barbaric manner.”

The crowd began excitedly chanting “Stand for life!” while His Eminence waited for a new microphone at one point.

“New South Wales abolished the death penalty for murder in 1955; now, it is being reintroduced,” Abp. Makarios lamented, noting that the draft law would allow abortion even for something as trivial as the parents not liking the gender of the baby.

The hierarch also called on caring people to reach out and help pregnant women who are in need of love and support.

His Eminence finished his address by leading the people in calling out “Lord have mercy,” which prompted chants of “Kyrie Eleison” from the crowd.