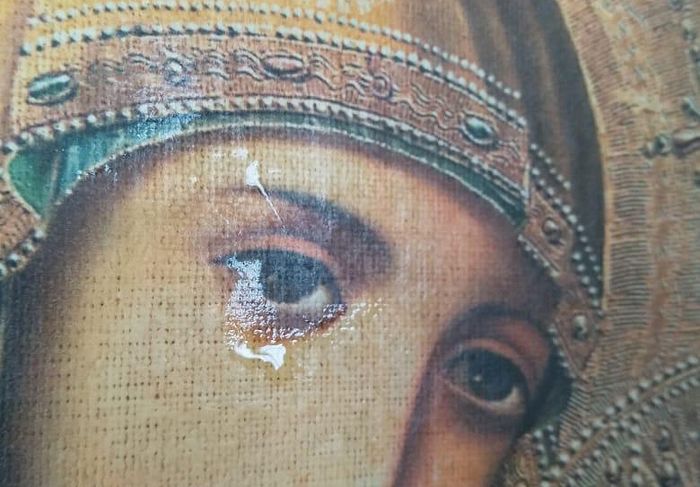 On July 9, the day of the commemoration of the  Lviv Tikhvin Weeping Icon of the Mother of God, a copy of this icon exuded a scented oil (myron) in St. Amphilochius of Pochayiv Church, in Mostyska, in the Lviv region.

With the blessing of Archbishop Filaret of Lviv and Galicia, Archpriest Nikholai Petrushchak, the rector of St. Amphilochius of Pochayiv parish, celebrated a paraklesis  and an acakhist to the Theotokos in front of the icon.

The original icon is in St. George’s Cathedral in Lviv. A copy of the Tikhvin icon of the Mother of God was painted on Mount Athos and given to the Russian Imperial Consulate in Lviv. This icon is known as the miraculous Lviv Tikhvin Weeping Icon of the Mother of God. It was officially recognized as miraculous by the Holy Synod of the Ukrainian Orthodox Church in 1997 and is annually commemorated on June 26/July 9.