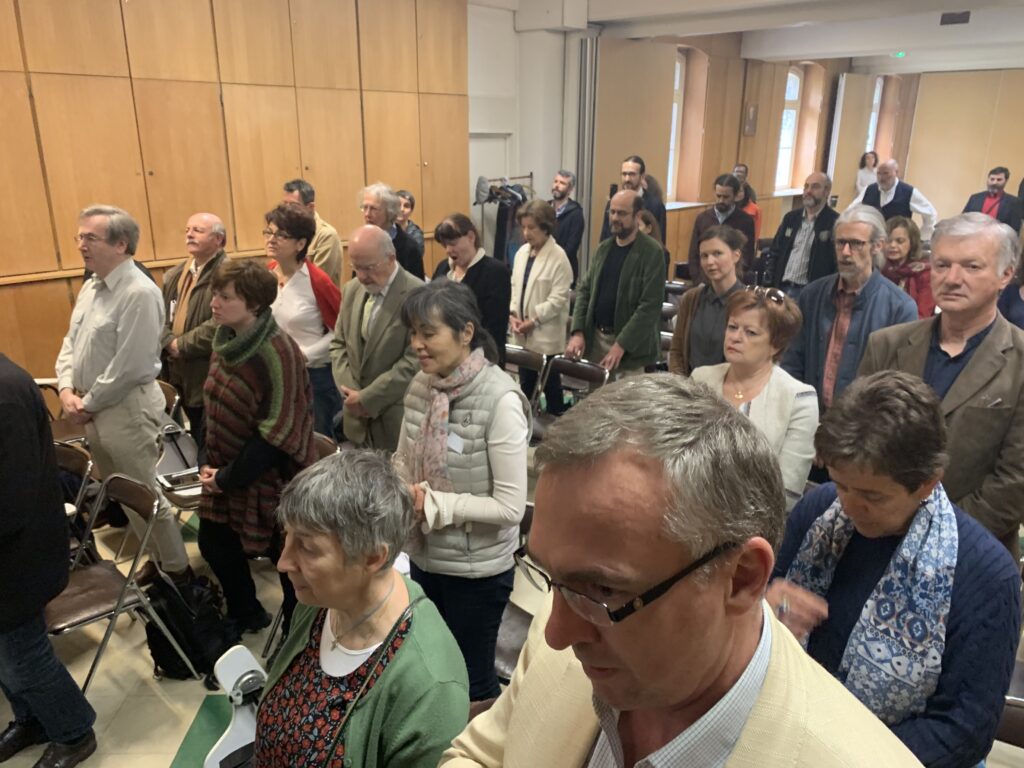 The symposium, held at the St-Sergius Institute, 93 rue de Crimée, Paris, on May, 17-18, 2019, brought together 16 speakers from 6 countries, and about 80 participants for its six thematic conferences.

As an introduction to the symposium, Cyrille Sollogoub, the president of ACER-MJO, presented the theologian’s life and writings, recalling his childhood spent in the Languedoc within an atheistic environment, then his discovery of Christ at the age of thirty, and his joining the Orthodox Church. A Church in which he carried out his exceptional theological activity in parallel with his profession as a history teacher.

In the first session, “Revisiting the Sources”, Fr Nicolas Cernokrak, the Dean of St. Sergius Institute where he teaches the New Testament, presented Olivier Clément’s exegetical method, and his relation to Scripture as a theological and spiritual criterion that must be based on life experience, in the light of the Holy Spirit.

Fr Marc-Antoine Costa de Beauregard, Ph.D. in Orthodox theology and the rector of the Saint-Germain-et-saint-Cloud Orthodox parish in Louveciennes, analyzed the introduction to the Philokalia written by O. Clément, highlighting the poetic and lyrical dimension of the theologian’s language, as the most appropriate to convey the divine mystery, thus placing him among the great Philokalic Fathers.

The second session, “Literature and spiritual life”, opened with an analysis by Tatiana Victoroff, professor of comparative literature at the University of Strasbourg. She focused on Clément’s books on Berdyaev and Solzhenitsyn, to show how the theologian knew how to highlight the meta-history at work in these authors’ works, where the most absurd historical events find their meaning, and where death “becomes a wound of transcendence that gives profound life to History”.

Jean-Claude Polet, Emeritus Professor of Literature at the University of Louvain (Belgium), then showed how O. Clément, in his approach to literature, thwarts the traditional principles of literary hermeneutics, in order to place himself at the existential heart of the message.

In her input, Olga Lossky, the author of several novels and the secretary of the journal Contacts, proposed an analysis of the theologian’s language, to highlight how he expresses the “third beauty”, that is, when the Kingdom of God surfaces within our daily reality.

The philosopher Bertrand Vergely, a professor of moral theology at St-Sergius Institute, outlined the philosophical context in which Olivier Clément’s anthropology unfolds, where “what we will be has not yet been revealed” (1 Jn 3:2).

On Saturday, May 18, the third session was devoted to “Christianity in dialogue”. The participants were first able to listen in absentia to the lecture by Andrea Riccardi, the founder of the Sant’Egidio community, who focused on May 1968. With this crucial moment, O. Clément started to listen to the students’ demands. He discerned in them a metaphysical thirst. A few months after the demonstrations was also for him the opportunity to meet the father figure of Patriarch Athenagoras, whose thought touched him deeply.

Brother Richard, a member of the Taizé community, then showed the great spiritual proximity between Taizé and O. Clément. He had found in this community one of his spiritual homelands, and the community had found in him a faithful friend, a connoisseur of the ancient Church Tradition.

Brother Lino, a member the monastic community of Bose (Italy), read a short message in tribute to O. Clément.

Then Roman Catholic theologian Barbara Hallensleben, a professor of dogmatics and ecumenical theology at the University of Freiburg, analyzed Clément’s book entitled Rome autrement [Rome, differently]. She challenged his position on the Roman primacy, suggesting that his analysis relied too specifically on Vatican I, and proposing instead perspectives to envision primacy in the Orthodox sphere.

The fourth session, “From salvation history to meta-history,” started with Jeremy Ingpen, a graduate of St. Sergius Institute, and the English translator of Clément’s first book, Transfiguring time. He  presented the thought of this book on the relationship between human and divine history: “For the Church, writes O. Clément in Transfiguring time, the ultimate is already in time”.

In the afternoon, the fifth session on “Post-modernity Challenges” began with Daniel Lossky, a teacher of Orthodox religion in Belgian public schools, and the secretary of the Orthodox Fraternity in Western Europe. He presented the vision of the local Church that O. Clément developed in the Fraternity, of which he was one of the main founders. He also talked about his canonical proposals concerning the future of Orthodoxy in Western Europe.

Pantelis Kalaitzidis, the director of Volos Theological Studies Academy (Greece), showed how O. Clément calls for a fruitful dialogue with modernity and secularism, in which he invites us to discern the seeds of the Gospel.

Brother Emmanuel Pisani, a Dominican professor of Islamology at the Roman Catholic Institute of Paris, presented Un respect têtu [A Stubborn Respect], a book dedicated to the Islamic-Christian dialogue, co-written by Mohamed Talibi, a Muslim thinker, and by the Orthodox theologian. Showing the originality of this book and analyzing its content, Brother Emmanuel outlined the new perspectives of dialogue suggested in it.

The last session, “Living the Mystery of the Church in the World,” opened with a lecture by the Reverend Agnès von Kirchbach, a pastor teaching at ISEO. She proposed a  new reading of Petite boussole spirituelle pour notre temps [Little Spiritual Compass for our time], the last work published in the theologian’s life time. According to her, it can be considered as his spiritual testament, as it outlines the main elements of contemporary Christian witnessing.

The last lecture was given by Michel Stavrou, a professor of dogmatics at St Sergius Institute and the director of the journal Contacts. He highlighted the Eucharistic theology developed by O. Clement, as the heart of the life of the Church and the center from which the announcement of Christ’s resurrection to the contemporary world can spread.

The symposium benefited from the continuous and discreet presence of Metropolitan Joseph, the head of the Romanian Orthodox Metropolis in Western and Southern Europe. At the end of the symposium, he agreed to share his memories as a former student at St. Sergius Institute, where he attended classes by O. Clément. According to his testimony, the theologian’s vibrant speech would often end up becoming prayer.

This symposium allowed for a number of profound exchanges, both in plenary sessions and in informal discussions, and offered an intense and festive moment to the memory of the great theologian. The Acts will be published in an upcoming issue of the Orthodox theological journal Contacts.