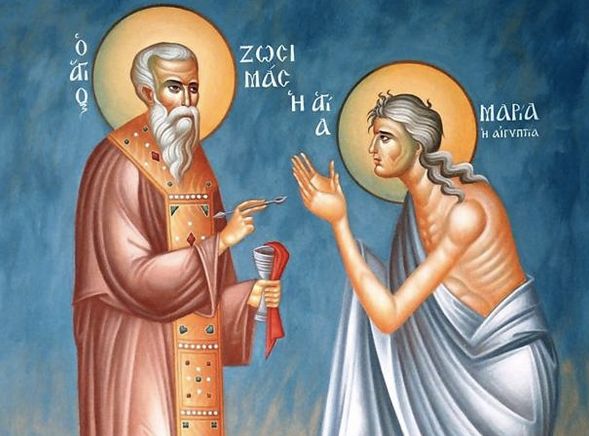 Saint Macarius was born at Constantinople in 785. While still a child, he lost his parents. The saint fervently read the Scriptures and came to realize that earthly things are temporary and perishable, and that heavenly things are permanent and imperishable. Therefore, he decided to devote his life entirely to God. He entered the Pelecete monastery in Bithynia, where at the time the igumen was the renowned ascetic, Saint Hilarion (March 28).

After the death of Saint Hilarion, Saint Macarius was unanimously chosen as igumen by the brethren. During the reign of the Byzantine Emperors Leo V the Armenian (813-820) and Michael II the Stammerer (820-829), Saint Macarius suffered as a confessor for the veneration of holy icons. He was sent to the island of Aphousia, where he died in about the year 830.

The image of God was truly preserved in you, O mother, / For you took up the Cross and followed Christ. / By so doing, you taught us to disregard the flesh, for it passes away; / But to care instead for the soul, since it is immortal. / Therefore your spirit, O holy Mother Mary, rejoices with the Angels.

Having been a sinful woman, / You became through repentance a Bride of Christ. / Having attained angelic life, / You defeated demons with the weapon of the Cross; / Therefore, O most glorious Mary you are a Bride of the Kingdom!

24
The Lord of hosts has sworn, saying, “Surely, as I have thought, so it shall come to pass, and as I have purposed, so it shall stand:
25
That I will break the Assyrian in My land, and on My mountains tread him underfoot. Then his yoke shall be removed from them, and his burden removed from their shoulders.
26
This is the purpose that is purposed against the whole earth, and this is the hand that is stretched out over all the nations.
27
For the Lord of hosts has purposed, and who will annul it? His hand is stretched out, and who will turn it back?”
28
This is the burden which came in the year that King Ahaz died.
29
“Do not rejoice, all you of Philistia, because the rod that struck you is broken; for out of the serpent’s roots will come forth a viper, and its offspring will be a fiery flying serpent.
30
The firstborn of the poor will feed, and the needy will lie down in safety; I will kill your roots with famine, and it will slay your remnant.
31
Wail, O gate! Cry, O city! All you of Philistia are dissolved; for smoke will come from the north, and no one will be alone in his appointed times.”
32
What will they answer the messengers of the nation? That the Lord has founded Zion, and the poor of His people shall take refuge in it.

21
And the Lord smelled a soothing aroma. Then the Lord said in His heart, “I will never again curse the ground for man’s sake, although the imagination of man’s heart is evil from his youth; nor will I again destroy every living thing as I have done.
22
While the earth remains, seedtime and harvest, cold and heat, winter and summer, and day and night shall not cease.”
1
So God blessed Noah and his sons, and said to them: “Be fruitful and multiply, and fill the earth.
2
“And the fear of you and the dread of you shall be on every beast of the earth, on every bird of the air, on all that move on the earth, and on all the fish of the sea. They are given into your hand.
3
Every moving thing that lives shall be food for you. I have given you all things, even as the green herbs.
4
But you shall not eat flesh with its life, that is, its blood.
5
Surely for your lifeblood I will demand a reckoning; from the hand of every beast I will require it, and from the hand of man. From the hand of every man’s brother I will require the life of man.
6
Whoever sheds man’s blood, by man his blood shall be shed; for in the image of God He made man.
7
And as for you, be fruitful and multiply; Bring forth abundantly in the earth And multiply in it.”

19
As righteousness leads to life, so he who pursues evil pursues it to his own death.
20
Those who are of a perverse heart are an abomination to the Lord, but the blameless in their ways are His delight.
21
Though they join forces, the wicked will not go unpunished; but the posterity of the righteous will be delivered.
22
As a ring of gold in a swine’s snout, so is a lovely woman who lacks discretion.
23
The desire of the righteous is only good, but the expectation of the wicked is wrath.
24
There is one who scatters, yet increases more; and there is one who withholds more than is right, but it leads to poverty.
25
The generous soul will be made rich, and he who waters will also be watered himself.
26
The people will curse him who withholds grain, but blessing will be on the head of him who sells it.
27
He who earnestly seeks good finds favor, but trouble will come to him who seeks evil.
28
He who trusts in his riches will fall, but the righteous will flourish like foliage.
29
He who troubles his own house will inherit the wind, and the fool will be servant to the wise of heart.
30
The fruit of the righteous is a tree of life, and he who wins souls is wise.
31
If the righteous will be recompensed on the earth, how much more the ungodly and the sinner.
1
Whoever loves instruction loves knowledge, but he who hates correction is stupid.
2
A good man obtains favor from the Lord, but a man of wicked intentions He will condemn.
3
A man is not established by wickedness, but the root of the righteous cannot be moved.
4
An excellent wife is the crown of her husband, but she who causes shame is like rottenness in his bones.
5
The thoughts of the righteous are right, but the counsels of the wicked are deceitful.
6
The words of the wicked are, “Lie in wait for blood,” but the mouth of the upright will deliver them.