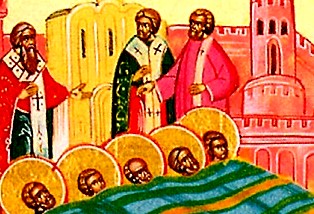 Uncovering of the Relics of the Holy Martyrs at the Gate of Eugenius at Constantinople (395-423). Martyrs Maurice and his son, Photinus, and Martyrs Theodore, Philip, and 70 soldiers, at Apamea in Syria (ca. 305). Ven. Thalassius, Limnæus and Baradates, Hermits, of Syria (5th c.). St. Athanasius the Confessor, of Constantinople (821). 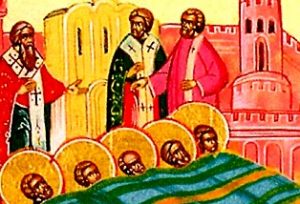 During the persecutions against Christians the relics of the holy martyrs were usually buried by believers in hidden places. So at Constantinople, near the gates and tower in the Eugenius quarter, the bodies of several martyrs were found. Their names remain unknown by the Church.

Your holy martyrs, O Lord, / through their sufferings have received incorruptible crowns from You, our God. / For having Your strength, they laid low their adversaries, / and shattered the powerless boldness of demons. / Through their intercessions, save our souls!

As bright lights you shone forth from the earth / dispelling ungodly darkness; / and illuminating the faithful, O divine martyrs, champions of the Trinity.

3
And being in Bethany at the house of Simon the leper, as He sat at the table, a woman came having an alabaster flask of very costly oil of spikenard. Then she broke the flask and poured it on His head.
4
But there were some who were indignant among themselves, and said, “Why was this fragrant oil wasted?
5
For it might have been sold for more than three hundred denarii and given to the poor.” And they criticized her sharply.
6
But Jesus said, “Let her alone. Why do you trouble her? She has done a good work for Me.
7
For you have the poor with you always, and whenever you wish you may do them good; but Me you do not have always.
8
She has done what she could. She has come beforehand to anoint My body for burial.
9
Assuredly, I say to you, wherever this gospel is preached in the whole world, what this woman has done will also be told as a memorial to her.”