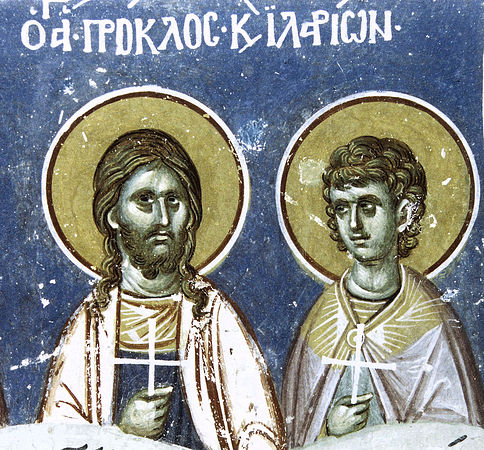 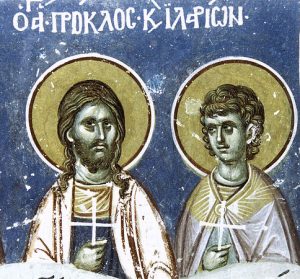 The Holy Martyrs Proclus and Hilarion were natives of the village of Kallippi, near Ancyra, and they suffered during the time of a persecution under the emperor Trajan (98-117). Saint Proclus was put under arrest first. Brought before the governor Maximus, he fearlessly confessed his faith in Christ. The governor decided to compel the saint to submit himself to the emperor and offer sacrifice to the pagan gods. During his tortures, the martyr predicted to Maximus that soon he himself would be compelled to confess Christ as the true God. They forced the martyr to run after the chariot of the governor, heading towards the village Kallippi. Exhausted, Saint Proclus prayed that the Lord would halt the chariot. By the power of God the chariot halted, and no force could move it from the spot. The dignitary sitting in it became petrified. The martyr told him that he would remain unmoving until such time as he would sign a document with a confession of Christ. Only after this could the chariot continue on its way with the governor.

The humiliated pagan took fierce revenge on Saint Proclus. He commanded that Proclus be led out beyond the city, tied to a pillar and shot with arrows. The soldiers, leading Saint Proclus to execution, told him to give in and save his life, but the saint said that they should follow their orders.

Along the way to the place of execution, they met Hilarion, the nephew of Saint Proclus, who with tears embraced his uncle and also confessed himself a Christian. The soldiers seized him, and he was thrown into prison. The holy Martyr Proclus prayed for his tormentors and surrendered his soul to God beneath a hail of arrows.

Saint Hilarion was brought to trial and, with the same courage as Saint Proclus, confessed himself a Christian. After tortures he was sentenced to death. They tied the martyr’s hands and dragged him by his feet through the city, wounded and bloody, and then they beheaded him three days after the death of his uncle, the holy Martyr Proclus. Christians buried them together in a single grave.

Your holy martyrs Proclus and Hilary, O Lord, / through their sufferings have received incorruptible crowns from You, our God. / For having Your strength, they laid low their adversaries, / and shattered the powerless boldness of demons. / Through their intercessions, save our souls!

Like the morning star, / your glorious sufferings enlighten us with holy miracles. / We celebrate your memory, Proclus and Hilary; / pray to Christ God for us / that He will save our souls.

18
Let no one deceive himself. If anyone among you seems to be wise in this age, let him become a fool that he may become wise.
19
For the wisdom of this world is foolishness with God. For it is written, “He catches the wise in their own craftiness”;
20
and again, “The LORD knows the thoughts of the wise, that they are futile.”
21
Therefore let no one boast in men. For all things are yours:
22
whether Paul or Apollos or Cephas, or the world or life or death, or things present or things to come – all are yours.
23
And you are Christ’s, and Christ is God’s.

36
Then Jesus sent the multitude away and went into the house. And His disciples came to Him, saying, “Explain to us the parable of the tares of the field.”
37
He answered and said to them: “He who sows the good seed is the Son of Man.
38
The field is the world, the good seeds are the sons of the kingdom, but the tares are the sons of the wicked one.
39
The enemy who sowed them is the devil, the harvest is the end of the age, and the reapers are the angels.
40
Therefore as the tares are gathered and burned in the fire, so it will be at the end of this age.
41
The Son of Man will send out His angels, and they will gather out of His kingdom all things that offend, and those who practice lawlessness,
42
and will cast them into the furnace of fire. There will be wailing and gnashing of teeth.
43
Then the righteous will shine forth as the sun in the kingdom of their Father. He who has ears to hear, let him hear!