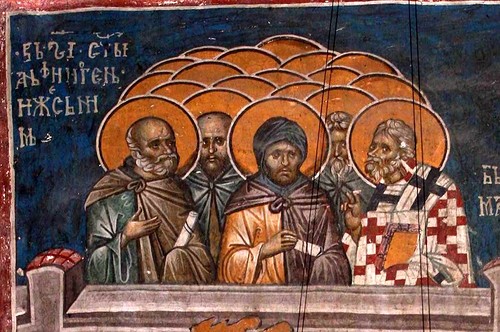 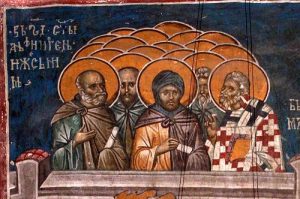 Hieromartyr Athenogenes and his Ten Disciples suffered for Christ during the persecution of Christians in the city of Sebastea in Cappadocia. The governor Philomachos arranged a large festival in honor of the pagan gods and called upon the citizens of Sebastea to offer sacrifice to the idols. Most of the inhabitants of Sebastea were Christians, and refused to participate in the impious celebration. Soldiers were ordered to kill those who resisted, and so many Christians received a martyr’s crown.

It came to the governor’s attention that Christianity was spreading because of the grace-filled preaching of Bishop Athenogenes. Soldiers were ordered to find the Elder and arrest him. Bishop Athenogenes and ten of his disciples lived in a small monastery not far from the city. The soldiers did not find the bishop there, so they arrested his disciples. The governor ordered that they be bound with chains and thrown into prison.

Saint Athenogenes was arrested when he came to Sebastea to inform the judge that those who had been jailed were innocent. While in prison, Saint Athenogenes encouraged his spiritual children for their impending struggle. Led forth to trial, all the holy martyrs confessed themselves Christians and refused to offer sacrifice to idols.

After undergoing fierce tortures, the disciples of the holy bishop were beheaded. After the execution of the disciples, the executioners were ordered to torture the bishop. Strengthened by the Lord, Saint Athenogenes underwent the tortures with dignity. His only request was that he be executed in the monastery.

Taken to his own monastery, the saint gave thanks to God, and he rejoiced in the sufferings that he had undergone for Him. Saint Athenogenes asked that the Lord would forgive the sins of all those who would remember both him and his disciples.

The Lord granted the saint to hear His Voice before death, announcing the promise given to the penitent thief: “Today you shall be with Me in Paradise.” The hieromartyr willingly bent his neck beneath the sword.

Most blessed and wise Bishop and Martyr Athenogenes, / You grew as a palm tree in the Monastic life; / Towering as a cedar in your struggles, / Through your teachings you brought a number of martyrs to Christ. / We honor them together with you.

Following the Master’s teachings, / as a shepherd you laid down your life for the flock of Christ. / Therefore, we praise you and your ten disciples, who under your guidance and in the fear of God suffered with you. / With His life-creating right hand / the Lord has granted you a crown. / Pray to Him for us all, Hieromartyr Athenogenes.

9
For to this end Christ died and rose and lived again, that He might be Lord of both the dead and the living.
10
But why do you judge your brother? Or why do you show contempt for your brother? For we shall all stand before the judgment seat of Christ.
11
For it is written: “As I live, says the LORD, every knee shall bow to Me, and every tongue shall confess to God.”
12
So then each of us shall give account of himself to God.
13
Therefore let us not judge one another anymore, but rather resolve this, not to put a stumbling block or a cause to fall in our brother’s way.
14
I know and am convinced by the Lord Jesus that there is nothing unclean of itself; but to him who considers anything to be unclean, to him it is unclean.
15
Yet if your brother is grieved because of your food, you are no longer walking in love. Do not destroy with your food the one for whom Christ died.
16
Therefore do not let your good be spoken of as evil;
17
for the kingdom of God is not eating and drinking, but righteousness and peace and joy in the Holy Spirit.
18
For he who serves Christ in these things is acceptable to God and approved by men.

14
Then the Pharisees went out and plotted against Him, how they might destroy Him.
15
But when Jesus knew it, He withdrew from there. And great multitudes followed Him, and He healed them all.
16
Yet He warned them not to make Him known,
22
Then one was brought to Him who was demon-possessed, blind and mute; and He healed him, so that the blind and mute man both spoke and saw.
23
And all the multitudes were amazed and said, “Could this be the Son of David?”
24
Now when the Pharisees heard it they said, “This fellow does not cast out demons except by Beelzebub, the ruler of the demons.”
25
But Jesus knew their thoughts, and said to them: “Every kingdom divided against itself is brought to desolation, and every city or house divided against itself will not stand.
26
If Satan casts out Satan, he is divided against himself. How then will his kingdom stand?
27
And if I cast out demons by Beelzebub, by whom do your sons cast them out? Therefore they shall be your judges.
28
But if I cast out demons by the Spirit of God, surely the kingdom of God has come upon you.
29
Or how can one enter a strong man’s house and plunder his goods, unless he first binds the strong man? And then he will plunder his house.
30
He who is not with Me is against Me, and he who does not gather with Me scatters abroad.